I wrecked my body

It is now roughly 30 hours after finishing the Washington State Time Trial championships. I've been on the floor watching Breaking Bad for three hours now. And I can't move.

Last night I felt like I had been repeatedly stabbed. I couldn't roll over in bed, because for all I knew my hips had been disconnected from my body and were floating around in an smorgasbord of discomfort and angel tears. Let's not even begin to talk about my ass muscles. Sweet Baby Jesus.

Let's not talk about something else. How there is something wrong with me. Why do I want to do another one of these? Just typing is hurting my forearms!

Yesterday I drove to Tenino, the town where they feed road kill to wolves at Wolf Haven. On tap was a 40km time trial, on mostly flat roads. There was a section of terrible chipseal where upon hitting it, my power went up 200 watts and my speed went down probably 7 mph. There wasn't much wind, there wasn't much turning, and there wasn't much to distract you from pedaling hard. This combination of factors combined to create the feeling in my universe that there may be a risk of internal combustion and permanent damage.

I've never done a 40 km time trial before. I've done similar things though. I've ran full speed into brick walls. I've jumped off a bridge into piles of nails. I've also tied my legs to semi trucks and have them driven in opposite directions. Only one of those statements is true (two counting this one).

Now that I wrote that, I think it is probably pretty likely that I have ran into a brick wall in my lifetime. So two of those statements were true.

Since I never have done a 40km tt before (sorry to ruin the game), I set a power goal and wanted to stick to it. I was feeling great, I was in a good rhythm, I was staying smooth, and I was passing people. I thought that I was on tap for a great ride! Then, shortly before the turn around, something happened.

I got MASSIVELY Colby-Cranked. That's right folks, my teammate Colby Wait-Molyneux started one minute behind me and had just caught me by the turn around. I right then threw my power goals out the window and pedaled as hard as I could. This worked well for about three minutes until I started to implode and I backed off again. Soon, Colby caught and passed me for the second time. I focused on staying smooth and passed him back ten minutes later. He caught me with two K to go, and I caught him back with 500m to go. We finished together, with Colby finishing exactly one minute faster than I did.

I had a ride I was very happy with. I did better power than I was hoping, I didn't explode, and I didn't have anything left at the line. Colby and I were able to go 1-2, with third place a couple minutes back from me. Let's find where Colby got that minute!

Here I am, settled into my pace on the way out. Notice I'm mostly nose breathing, I'm in focus, and I look like a fairly friendly human.

Meanwhile, Colby was coming up HOT behind me. Here's what one minute looks like! Notice the lion roar, the shifter further down in a bigger gear, the blurry photo, and the lack of apparent eyeballs. You never want to let your competition see your eyes. I need to paint my visor.

We rode the same time on the way back and passed eachother five times. Actually:

Will Teal from HSP had a good ride for third, and I heard that he finished on a flat tire. That means he was smashing it! 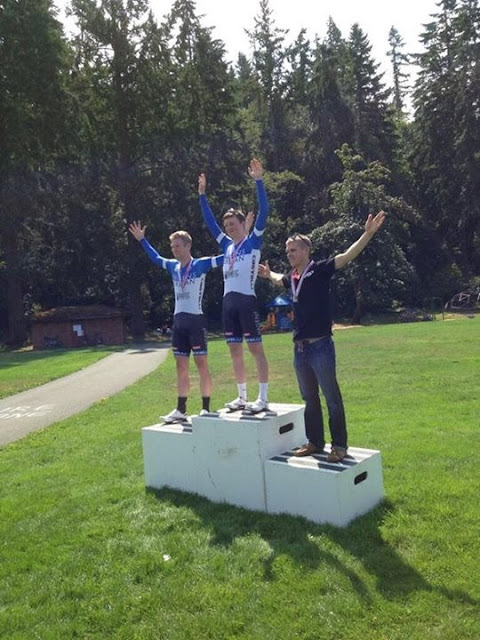 Here's a picture I pulled off of Colby's FB page. It's Colby there on the left. I can only hope that's me on the right.

I love these time trial things. Wow.Tweet
Posted by Ian Crane at 5:55 PM