Whether that is drinking a latte out of a mug, or riding your bike, make sure that you do it with full excitement. You’re incredibly lucky! To all my friends, as you may have heard I was involved in a pretty heavy crash at the USA Pro Challenge. If you just follow me on the blog and not on Twitter (???) you probably didn’t even know that I was lucky enough to be doing that race. I hope to have an update about the race on here at some point but for now I am going to focus on the more currently relevant topic at hand, which was the big accident that made its way around the internet. 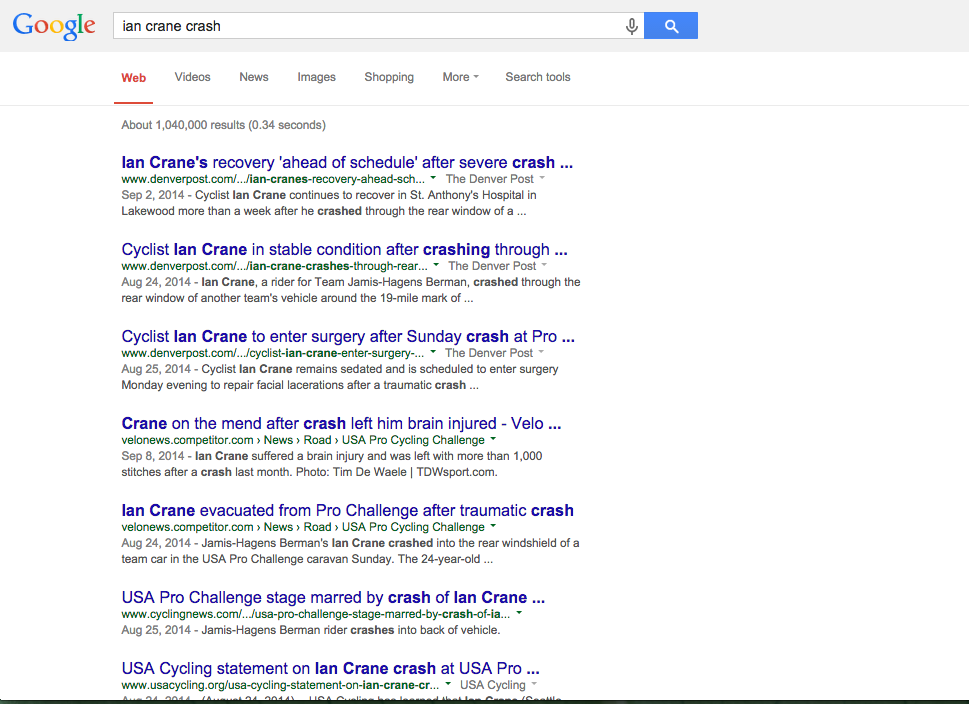 I’d like to avoid a career in horror/gore writing, so I’ll leave out a lot of details, but I’ve had a fairly wild last three weeks and I’d love to share with all of you. First of all, a huge thank you to all my friends and fans who have reached out to me in this tough time with words of encouragement and support. Reading your cards while in the hospital was a daily dose of positivity for me and they definitely got me through some tough times. Thank you again for all the kind words and I’m truly blown away by the support in our community.

Rewind. The last stage of the USA Pro Challenge started in Boulder and made our way to Denver. I remember the crowd being incredible in Boulder and I was thrilled to be in the race. More in a race-specific post later. The neutral laps in town are the last thing that I remember from the Pro Challenge. From outside information, I heard that we were guttered in a crosswind through a construction zone in the first couple miles of the race and I clipped a tall cone with my bars and put myself on the ground at a high speed. This put me off the back of the race and I began to work my way through the caravan. The cars stopped suddenly and I went face-first through the rear window of one of the team cars. The first crash was all road rash, and all my serious injuries came from this second unfortunate accident. It's important to know that I hold no one to blame for this, and I absolutely know that riding in the caravan is always a risk.

What followed next was part of the “Ian is incredibly lucky” sequence of events. I am incredibly grateful for the medical staff of the Pro Challenge, and especially Jeff, the first man on scene. He checked me out after the first crash, and called the med car up in the caravan line to follow me back through the caravan to make sure that that first crash hadn’t busted me up in a way that he didn’t notice. Because of this precaution, I had the best possible care very quickly. GRUESOME WARNING! I had cut my jugular when I went through the windshield and a man in the main med car following me was a trauma surgeon, pinched off and sewed my jugular up within 4 seconds of going through the window. Besides this, the Medivac had recently decided to land in a nearby park to watch the race. I went through the window around 800 feet from where the helicopter had landed, which ensured that I made my way to the trauma hospital as soon as was possible. The last “Ian is lucky” for now: I got taken to the #1 hospital for brain injuries in all of Colorado. I was in that hospital for two weeks and truly felt like I was in great hands the whole time. Thank you St. Anthony Hospital!!!

To avoid too many gory details, I will say that I suffered a “traumatic brain injury”, I severely cut my face and neck, broke my scapula, broke my occipital condyle in my head, tore several tendons in my neck, and chipped four of my front teeth in half. Along with these things, I also had perhaps the highest surface area of road rash I’ve had in several years from the first crash. I have no memories from about the neutral start of the stage, and nothing until around 2-3 days after the crash when I woke up from the coma I was in. It’s been pretty amazing though, because the road rash healed faster than any that I’ve had. My sister has been jokingly calling me Wolverine because I’ve been healing so fast! The thing that has been especially tough for me however is that the brain heals at its own rate. There is no seeing your brain heal! I’ve been working on controlling what I can- cycling is such a sport where everything is in your control, so I’ve been making sure that I control what I can in my healing. That means staying on top of my physical therapy and mental exercises.

I was at St. Anthony in Colorado for two weeks, and then experienced something incredible. Steve Berman, one of the title sponsors for my team, had heard of my accident and need to get back home to Washington. He offered his Private Jet for our use, and single handedly he got my family and myself home from Colorado. I am incredibly in debt to Mr. Berman and it showed me something incredible. Often times sponsors are just a blank face behind a computer screen, but with this incident, our title sponsor was a human being, and a tremendous one at that. We are deeply thankful for Mr. Berman and his gesture. I flew back home, in comfort, and transferred to the UW Rehab facility where I spent 8 days. I was discharged on Saturday and I’ve been home for the last couple days! 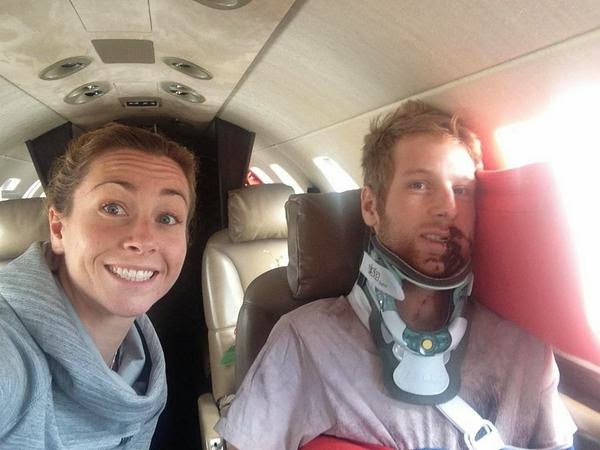 My brain injury had impacted some simple functions of life: My balance wasn’t great and my depth perception was off. These two things being abnormal make walking hard! Again, I had great care at UW Rehab and I went from hardly being able to walk, to going on long strolls outside. I even got to ride the exercise bike for twenty minutes! Today, I even stood on one foot for a minute, which gave me some great positivity about the direction that my healing is going. The abrasions and lacerations on my mouth and face have made it difficult for me to drink normally, so I’ve been drinking my coffees out of a syringe, hence the first sentence of this post.

Soon my scapula will heal and my neck will be better and I’ll be able to remove the neck brace. These are quantifiable improvements but the difficult thing will be making sure that I heal my brain and don’t put myself at any risks. Up next for me is a substantial quantity of Outpatient therapy. This is where I will be able to track the progress that my brain is making in healing itself, and ultimately where I will be given the good-to-go on driving as well as riding my bike outdoors. I have no current limitations on exercising though, so I plan to be a trainer interval KING this fall.

A quick story. One of my first nights in the hospital I was woken in the morning by a nurse drawing blood for testing. As a small hallucination, I was absolutely certain that I was at a race and had gotten a visit from USADA. This continues, because I was very sure that I was getting ready to race the Tusher in the Crusher (In Utah) with my teammate Ben Jacques-Maynes. I drowsily requested more breakfast, because I needed the energy for this race.

I hope that this above story reflects something for you all. I 100% plan on making a return to bike racing. It is important for me to make sure that my brain is healed before I do anything risky, but bike racing is a large part of my life. I am doing everything in my power to make sure I am able to return to the sport that I love so much. In fact, now is a good time to announce that I HAVE signed a contract for 2015 and will be a Professional cyclist again.

I would like to make something else known. It was a big goal for me to do one of the Big Three races in the US this year (Utah, Colorado, California), and I am very glad that I had the opportunity to race the Pro Challenge. Although the ending was obviously not to script, the race was still a great experience. More later.

I’d like to make sure and include how lucky I am to have the support that I do from my family (Mom, Dad, and Tela) and my girlfriend, Marissa. All four of these wonderful people flew down to Colorado and were in the hospital when I woke up. I am beyond grateful for the level of care they have given me during this “Worst case scenario” type accident. I’d also like to give a special thanks to my Team’s Manager, Sebastian Alexandre. Besides supporting me throughout my hospital time, he also played a huge role in making sure that my family was looked after as they went through what I’m sure was a very tough time.

Thanks for taking the time to hear my side of the story! Please know that any jokes in this post were meant …simply because I’m the one writing this. I understand that this situation is not something to make light of, so that was not my intention to. I’m a very lucky guy and understand what I got myself into.

Lastly, let’s talk animal shirts. For those following along on twitter, you may have noticed a trend of animal shirts while I worked on my rehab. They have all been gifts during this whole…ordeal. When I woke up my mom had gotten me three animal shirts as a surprise: The Orangutan, Panther, and Sugar Glider. Laurie O’brien got me a tiger shirt as a surprise after seeing the first three. You all can make your own opinions on them, but I love them. AND they all fit over the neck brace easily. 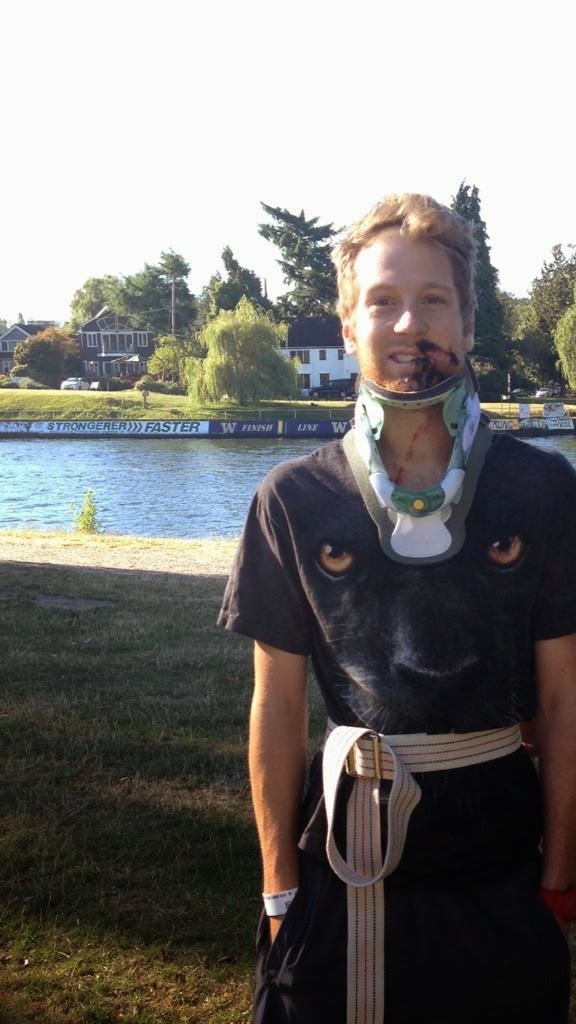 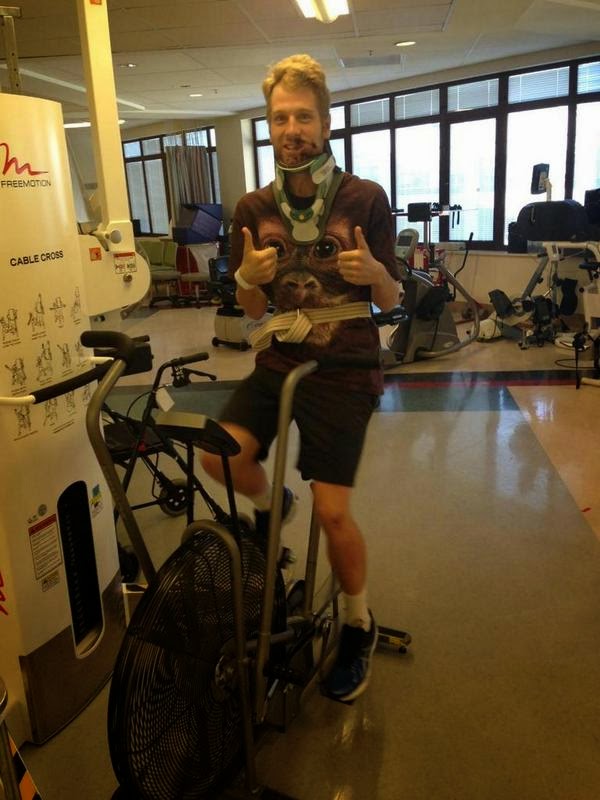 Apologies for the long post, but it's been a pretty long three weeks. Thanks for taking the time to read my take on this whole experience! Know that I'm doing everything in my strength to come back an absolute machine.
Tweet
Posted by Ian Crane at 11:38 AM