Welcome to Nellyville, where all newborns get a half-a-mil, son gets a tan deville, soon as he can reach the wheel. And ALL get diamonds the size of their age. E-I

Turns out that this song is entirely true. St. Louis: Big fights, Fitz Rootbeer, people getting escorted out of restaurants by police officers, three bike races, real live dinosaurs, the SECOND best zoo in the states, the STD capital of the world (actually the 5th in the states), home of Nelly, and a host house with zero pets. These are all things that NEVER HAPPEN but actually in reality they happen at least once. More on this later.

Steve, David, Danny and myself journeyed to the Mid-West for some good ol' fashioned crit racing. What I mean by this is that we wore wool jerseys, cut-off jean shorts, hairnet helmets, and had Albert Pujols' baseball cards in our spokes. About mid-week leading into this Tour De Grove weekend, I decided to man-up about the... injuries... that I got at JMSR. With about 4 feet of Kinesio tape strategically wrapped around my upper body, the ribs and sternum were doing allright so I had a good couple days of training and went into this weekend feeling... rested. 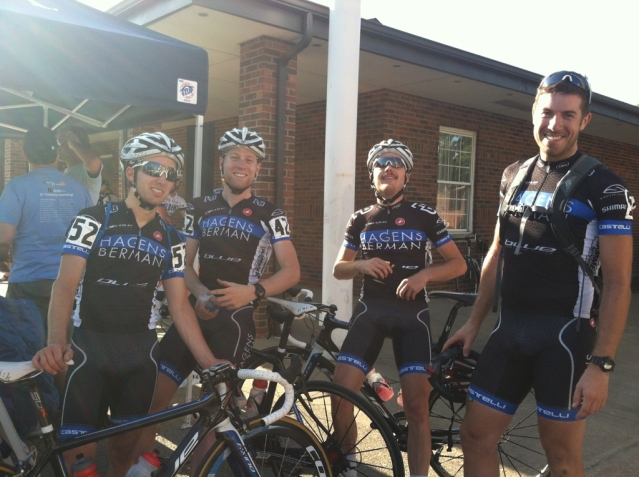 I love adventure, and we were greeted by adventure. First part of this adventure? We were due to land in St. Louis around %:#) (that's code for 5:30) and we raced that evening at 9:15 ( (:!$ ). For non-mathletes that left us with less than four hours to get picked up at the airport, go to host housing, build bikes, ride to race, race, then not sleep for SEVERAL hours. This adventure involved transportation. However, score one for our hosts. They brought three cars to pick us up. Adventure OVER. With three cars, we were able to get four bike boxes into 2-door Accords and Mazda Miatas and roll.

Before I talk about bike racing, let us peruse through the rest of the trip for exciting details. I think I was karmically rewarded for missing "the best trip ever" last weekend (Dana Pt). I say this because overall, this was a pretty great trip: Cool hosts/host housing, entertaining flights, proper television viewing, fist fights, good races, TWO different Mexican food establishments, lots of down time, and again, NELLY. 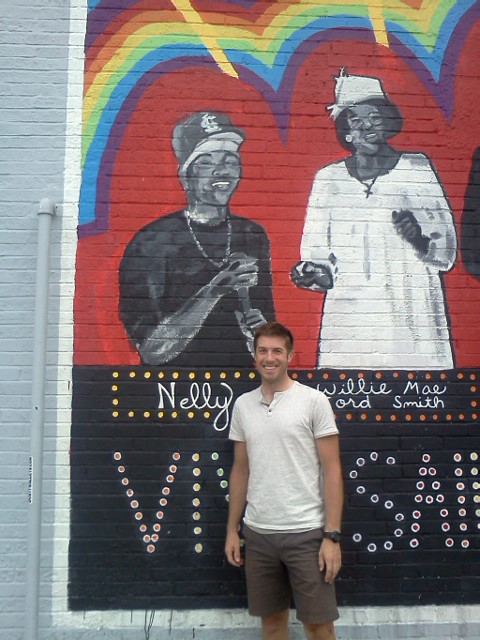 That will be the last time I mention Nelly in this post. But if you want to go and take a ride with me, because it's getting hot in herrre, you'd know that I am number one, and that two= not a winner, and three nobody remembers. Because you know this, good gracious, that a$$ is bodacious AND I'm going down down baby yo street in a range rover. Nelly's highschool was in sight of our housing! Wow!

Some other highlights I'd like to share are as follows: Cool TV, The Office, Step Up 2, Fitz's, Dinosaurs, dangerous activities and mustaches.

Cool TV-
One of few TV channels at our housing. This is not a bad thing, because Cool TV has everything you'd need. It's like MTV used to be when I was 7, except with stranger music and Beyonce songs that no one has heard of.

The Office-
Over the course of the weekend we watched one complete season of The Office. This also marks the most Office that I've ever watched, and my theory that it's funnier while watching with other people stands true, because I did my fair share of giggling.

Step Up 2-
Infinitely better than Step Up 1. We finished crit racing Friday night and got back to host housing around 11. After eating, we were of course not even close to tired, so our hosts suggested/forced/made us watch Step Up 2. I'm glad we did because I learned many lessons from this movie. Lesson one, follow your dreams. Lesson two, take it to the streets. Lesson three, use your clothes as props while dancing. Lesson four, the soul of a person is not defined by their metaphorical relationships within the educational system, yet by the creation of dual-personas reinforced by anti-stereotypical messages within that of a greater common goal. 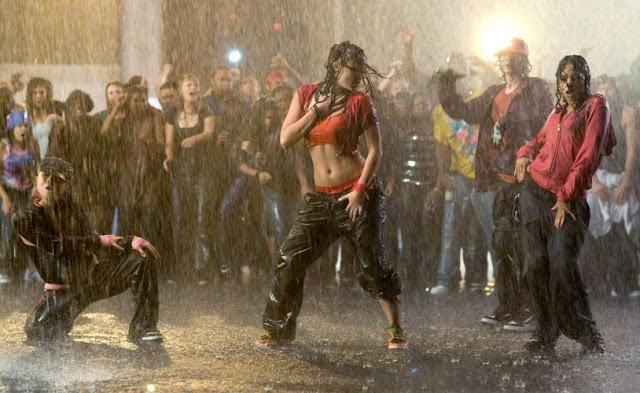 Fitz's-
WORLD FAMOUS ROOTBEER. That is all. Steve cornered extremely dangerously then sprinted his brains out for a prime on Friday that won him some gift certs to this Fitz's place. We went there on Monday, and Steve ruined the progress that he has made by only eating vegetables for the past month. 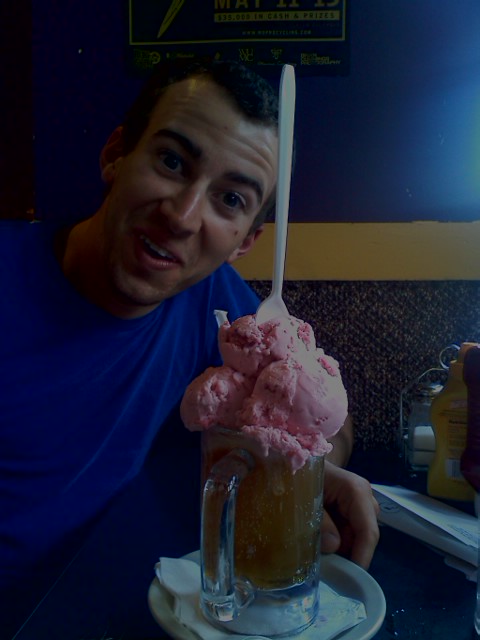 Dinosaurs-
We were just riding along and Danny was attacked. These were roaming around in a park so naturally we visited. 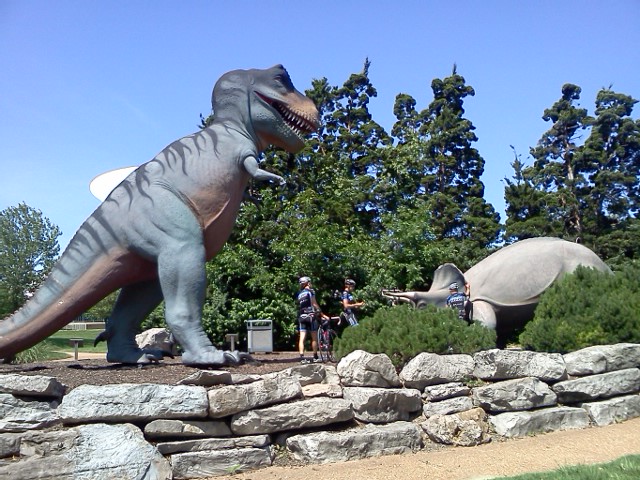 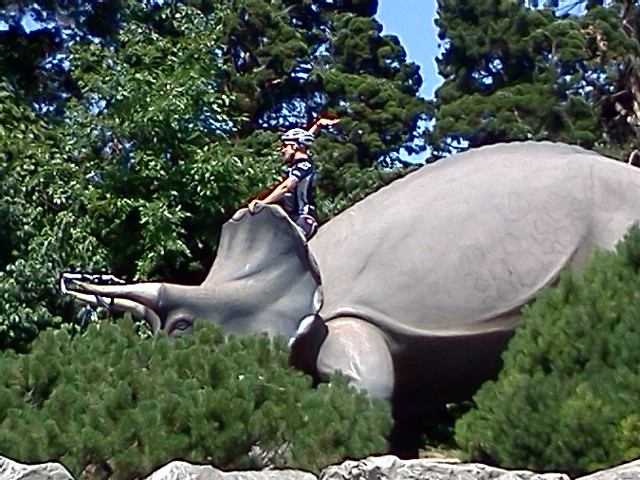 Dangerous activities-
There was a fight in the street outside of our host house! There was probably 6 guys circled around two guys fighting. Our host was about to run outside to try and break it up, which we didn't think was a good idea. So instead she called the police. Then we learned awhile later that she is a fourth degree black belt in Tae Kwon Do. I think she probably would've handled herself just fine. That'd be like someone trying to rob Floyd Mayweather on the streets. Surprise! 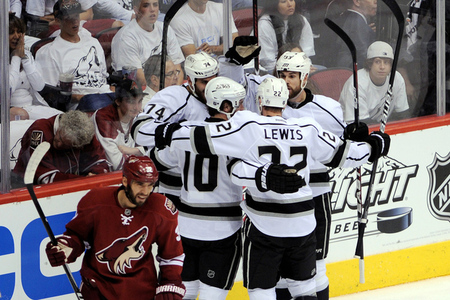 We did that, three times.

Advertised as 5 corners? But really only three, this was a dark, poorly lit, bumpy festivus. I felt terrible, Danny and David were involved in crashes, and Steve won that previously mentioned Fitz's prime. On the positive note, David got 20th, which was TEN DOLLARS of prize money!!!! On to the next one.

The big money bike race of the weekend. We were all very active, I was in a move that I thought FOR SURE was the right one, but then we got caught much to soon for my liking. Then I was involved in a crash with 4 to go, got in the pit, got back in the race, had Danny tow me to the front with two to go, fought for position, and then was involved in a crash on the last lap! Steve and Danny were also slowed down by the crash.

I really like this course, it's decently long and has a kicker climb of a finish straight that makes it pretty difficult. Danny spent the first twenty minutes doing things like winning primes and riding in breakaways and getting his name tweeted, so I thought I should do the same. I followed this up by spending the middle portion of the race riding in breakaways, getting SECOND on two primes (which by the way means nothing except for the fact that I'm the loser in this situation) and NOT getting my name tweeted. Then my break group was caught, and the move that countered ended up being the move that stayed away. Luckily, our teams smallest member pedaled his way into that move and ended up fifth on the day. Nice riding Steve! And continuing with my trend of late, I went down in a crash with two to go, ending any chances of sprinting. Luckily I landed directly on top of someone, so no damage for me!

Then, since it was HOT and we were extremely dehydrated (I drank two bottles during the crit while Danny had ONE SIP OF WATER) we stopped for slurpees on the way home. This was needed, since with riding to and from the race we were doing a 3.5 hour day. 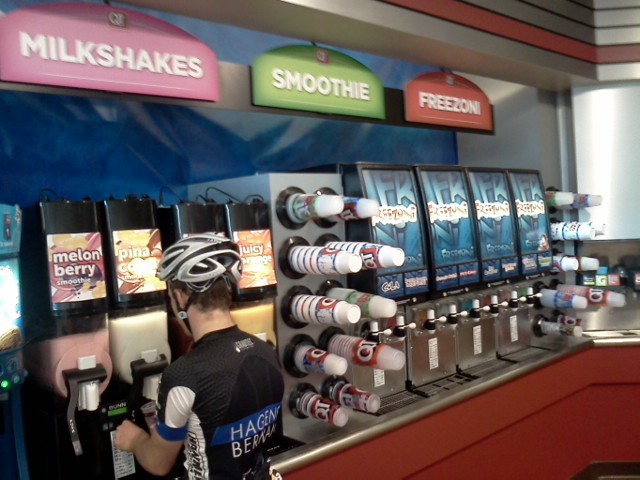 So an alright weekend for us. I think we're really clicking on riding as a team and helping eachother out, and it's only a matter of time before we crack something good.

We'll try again at Tulsa Tough in a couple of weeks.

Thanks again to our hosts Carrie and Claire.Tweet
Posted by Ian Crane at 9:48 AM