First things first, I updated my cover photo. I figured it was time to use a different picture than one of me in a race that I ended up crashing in. It (Hammer) Fizz what it is. Thanks to http://www.Winger316studios/Wingfieldproductions.Gov for the photos and thanks to myself for putting it together all fancy huh. Let me know what you think.

Things are getting real. I mean this not in the sense that I've finally secured that initial investor for all of my get rich (sensationally amazing) ideas, but in the sense that I have another plan on how to get rich. Everyone who knows anything about me, or everyone who knows anything about bike racing, knows that I spend an un-quantifiable amount of time driving places. Like, 1000 hours a week or something like that. This is fine when you roll in style in Sprinter Vans, Jetta TDI's, and 1993 Toyota Camry's, but often I yearn for more. I don't mean that I would rather drive around in different cars, but I strive for accessories that make driving more efficient, safer, more pleasant and less time consuming.

My last couple of car-related Get Rich Schemes (here and here) have involved two different aspects of driving. One touched on the actual road that you drive on, and the other was a way to remove some potential road rage in a wondrous way. I'm now going to take us down a different path. Unlike the previous driving Get stanky Rich Schemes, this one is somewhat more productive. Instead of hinting at fear like idea one or passive aggressive LOL'ing like idea two, this idea aims at helping those poor souls confused with their lives. This idea is a genuine pat on the back for those drivers lost without direction, driving with no purpose. Hey you genuine road-hazards, this one's for you babe.

That's right. A simple mechanism that is integrated into your car's speedometer, this device incorporates road data from speed signs and compares that to your current speed. It then projects a friendly message X amount of feet up the road. Confused, let me paint you a picture of examples.

You are driving your Red 1997 VW Beetle on I-5 heading Northbound. You are listening to Shakira blast out of your EXPENSIVE 6-cd disc changer (the other albums are the Beastie Boys License to Ill, Kanye West's College Registration, Arcade Fire's The Suburbs, Weird Al Yankovic's cd that made him money for some reason, and finally, You Raise Me Up by Josh Groban). You just had a wonderful weekend with your friends and are heading back home. You cross into the 70mph speed limit zone outside of Marysville and gradually increase your speed to 70.8 mph. Just driving, having a good time while your hips don't lie. Taking a sip of your latte, you come across a green Honda Civic going much too slow in ANY lane. For the purpose of this story, you are in the center lane, there is a hooligan party in the left lane, and the right lane is filled with truckers. Glancing down at your pearl white and shiny dashboard, you now see that you are going 64mph. This is dangerous, inconvenient, and annoying. But you are a people person. You believe in people and you believe that people are genuinely good. Unlike that book Lord of the Flies where ish gets cray and there is nothing that the fat kid named Piggy can do about it.

But what do you do? You aren't going to tailgate, screaming angrily and flashing your lights. You aren't going to abruptly change lanes, causing a chain reaction of braking in the fast lane. You were going 70.8 mph. You belong (with me, you belong with meeee) in the center lane.

Here is where Laser Speed Lights comes in. Since you love people, the only explanation is that this person DID NOT NOTICE the speed limit change! They are genuinely unaware that they are being a road hazard by driving much too slow in a fast speed limit. They are sitting in their car, thinking that they are speeding at 64 and that the rest of the drivers on the road are crazy speed maniacs. You must let them know somehow!

With Laser Speed Lights, you can politely inform that slow moving car in front of you that the speed limit has changed. Projecting a "Speed Limit: 70, your speed 64" sign in front of them in bright red lights will let them see that they missed something important! Then, any human being speeds up. It's like when people see the speed signs that tell you how fast you're going. You see that, and are either "wow, I'm a BAMF. 41 in a 35, take that society!", or you see that, SLAM ON YOUR BRAKES and go 35 for about 12 seconds until you are past the signed, then accelerate again to 41. Either way, there is some sort of reaction. The goal behind this product is to give people the opportunity to speed up before you unleash the sarcasm gun.

The real exciting part about this is how it works. You get a large lever installed on your dash, similar to an airplane. It is very difficult to push and gives off a satisfying noise when you push it up. Then, two LED projectors appear from your roof rack, projecting a 5ft by 5ft box with the necessary information in front of the car that needs to know their speed, and VOILLA.

Since people are so willing to pay a 520 toll to avoid traffic, why don't you invest in this instead? That way you don't have traffic anywhere instead of just that one bridge from Seattle to MI. 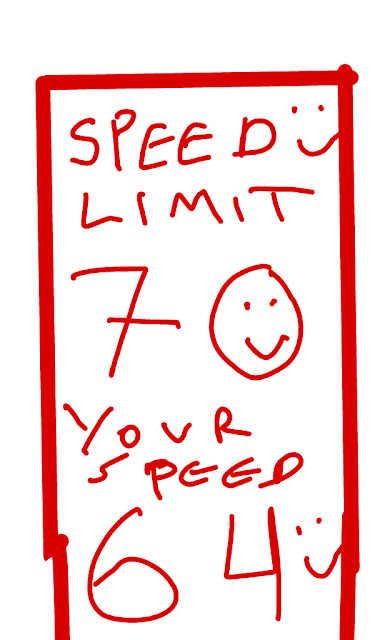 (For all you concerned with abuse of power, it is smart and takes the data from the road signs so you can't tell someone that the speed limit is 120 mph. Unless it actually is. Also, the smiley faces show the person that you aren't being mean and are a nice, well dressed, Shakira listening, VW driving, sensitive superior-Samaritan).
Tweet
Posted by Ian Crane at 10:37 AM