Get Rich You Creatures

Prelude- in no means is my newest product advocating road rage, angry driving, or even road fury. It's more of a hi-hi-hi-larious way to get rid of that anger.

While driving the ENTIRE Westsiiiide, including basically every territory in between Canada and Mexico, I had lots of time to think. Srsly though, I left Bellingham (about an 1/8th of an inch away from Canada on a map) and drove to Seattle. Then drove to Agoura Hills, California. Then drove to 2Sawn, Arizona, which is basically on the Mexico border. Then back. Here is the rough route that I traced onto Google Maps. 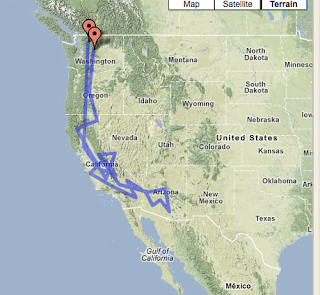 We didn't actually go to Nevada, but I put that in there because Danny REALLY wanted to go to Vegas. Which I'm pretty sure exists in more than just TV and movies, and I think its existence is in Nevada.

Anyways, here is how I'm going to be Vega-rich (like Mega-Rich, but relateable to people from Las Vegas). My newest idea stems from there being bad drivers everywhere, and the sad/depressing fact is that these people aren't bad because they're functionally a bad driver, but they are bad because they are so unaware of the world that they merge onto the freeway at 28 mph and drive in the left lane while napping. Seriously, I think most people never learned how roads work, and since people in positions of power (i.e. POTUS) seem to think other issues are more important than MY time (lame), there hasn't been some sort of broad re-teach everyone to drive mission statement. In fact, Future President Steve Fisher said that his first mission in office would be to take everyone's licenses away and make them be better at driving-life.

The basis of this invention is a little front bumper mounted launcher. Similar to a t-shirt launcher at a basketball game, a deposit shoot at a drive up bank window, or the little rocket launchers that James Bond has on the front of his Aston Martin Vanquish (which I will be able to buy once this idea is a-OK'ed by President Fisher).


Ok, so you get the launcher. Next, this product will have a touch screen on your dash board. There will also be a miniature joystick next to your shift lever. Pay close attention now, because this is where the annoying drivers come in.

When something wrongs you- ie you're trying to go 98 in a 60 and there is someone going 65 in the left lane (HOW DARE THEY), my device allows you to tell that person just how you feel.

I introduce you to the...

Using the joystick, you laser beam target the car. Once location is acquired (front drivers window is optimal), you press the button on the top of the joystick and the target locks on. On the touch screen, you then compose your message, or choose from several pre-composed messages.

This is very important: none of these messages are rageful. The screen has a microchip that tells when you are writing something wrong, and does not allow you to send that message to your new best friend! (See? Sarcasm. Right there. Because they aren't your friend). They are only tic-tac sized sarcastic messages that will make you feel better about yourself, all while doing nothing but confusing the person who received the message. You submit your message, it goes through the system, and a sticky note type carrier is launched from the bumper mounted cannon.

My vision is that this device will end road rage entirely. Combined with my speeding control device I have essentially figured out how to stop traffic.

Here are some sample messages:


"Hey Sport, I agree that the left lane is for cruising!"
"It sure was a treat to see your brake lights for no reason!"
"Thanks for restricting my speed, I wasn't actually in a hurry"
"I agree, mirrors are for style purposes only"

"That lane change worked out well for you!"

"HOW DARE YOU STOP AT A RED LIGHT AND LET ME HIT YOU DOING 80"
The technology for this is pretty advanced, so as of right now I can offer the whole set up for $499. *