A Day That Makes Me Feel Happy of Myself

Yesterday was a phenomenal day. Let me start from the very beginning.

I woke up with ease, well before the alarm was set to go off. I actually did something amazing- Colin (my roomate*) woke me up by saying "Hey Ian, it's breakfast time" and I woke up instantly in correct sentence structure. What I mean is that as Colin started his sentence, I peacefully woke up, and while waking up I processed that Colin was speaking to me, and as I drifted into the waking world I formulated a sentence that made perfect sense. Good start!

Also, the birds were chirping like a symphony of Mozart's stepchildren.

Next, I walked downstairs and used the button-push coffee machine to make coffeets. They were awesome. Then I had cookies for breakfast! After a winter of not eating anything but Kale and chicken broth, it was nice to learn that I had beaten Kennett in the body weight competition. So now that I've gained 18 pounds, it was time to sprint again.

Attention- there are no photos or videos here even though we took lots yesterday. I'm assuming that they just haven't gone through in my email yet, because Chris Wingfield took lots of awesome photos and Alan took lots of videos. I can only assume that the reason that I don't have these to share in my blog is that Winger is doing lots of editing to make sure my muscles look huge and shiny. Also, pretty excited to see these (hint) and I can't wait to see them (hint) and I'm sure that Wingerstudios.com did a awesome job and when I see the videos (hint) and have a new picture for my blog heading (hint) (that's a panoramic shot) (hint) I will be really excited. I'm glad that we have a photographer on the team who can make me look cool (I'm hoping) and can send me pictures and videos to use on my blog (hint). Thanks Winger and Alan for capturing our day yesterday!

So yesterday we got to do some sprint leadout training. Since we are group of hooligans, we had a great opportunity to learn from literally one of the best US based sprinters of all time- Ivan Dominguez.

Ivan is friends with Joe and because of that, we were able to go out and ride and get advice while doing the actual leadouts. No offense to Holmes, but he isn't and has never been capable of winning a bunch sprint at Tour of California, Tour of Missouri, or Seward Park Thursday Night World Championships. We split into some squads, and basically raced eachother using what we had just learned. My team was Jesse, David, Gabe, and Danny. We all restricted ourselves from putting the other team (our teammates) into the curb, but at one point I looked each of our competition through their eyes, into their souls, and threatened their unborn children. Not really. But actually I did.

We did three sprints, and each were the highlight of my week. It was a really great experience to do these with Dominguez giving us pointers and I took a lot from it. It's pretty cray cray how much you can learn in twenty minutes, and we're pretty G'd to try it out in the bike pedal races.

And then the first highlight of my great day-

After coffee with Dominguez, and by coffee I mean he had apple juice, we rode off for another photoshoot type activity. Winger stood in the middle of the road and Alan tried to walk rapidly backwards in flip-flops. I have yet to see these photos (hint) but when I do expect me to post them on here. Unless I look fat or my arms look really hairy.

For the second big highlight of my great day, check out this awesome photo I found of Steve and his peers! 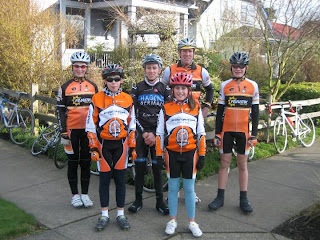 David- "those are all the tall guys kids. And they're all in like, elementary and middle school"
Kennett- "Steve just wanted to feel part of a group that's not above him"
Chris- "I'm so happy that photo exists"

And somehow camp is now over. In an hour David, Danny and I get into a rental Ferrari and drive nine hours to Tucson for the Old Pueblo GP. RACING ON SATURDAY!

*my kangaroo buddy (Colin's joke) (lol) (high-fives in the kitchen)Tweet
Posted by Ian Crane at 9:22 AM