The Adventures of My Dear Friend Redlands and I

Redlands, you are pretty close to not being invited to my birthday party. I meant that in the town sense, because it would be pretty darn ridiculous to invite a whole town to a birthday party. In the friend bike race description, sure, I guess Redlands can come to the party. But it better bring a gift because I'm still pretty worked from what it did to me last week.

Last year I had no idea what to expect going into the race. I ended up basically getting chewed up and spit out in pretty much every stage, finishing the race on GC about... 3rd to last or something. If you care, here is the report from last year. It was a great way to start the season last year, and that trend continues.

Let's get down to business.


Stage 1- Prologue (?) Time Trial (?) of death (!)
Let us be entirely honest with each other. This race is hard. Here is why it is hard:
Ok, so if I haven't convinced you, this course is HARD. It is only ~5k. That is all. 3.1 miles. The first 2 are gradually uphill, and the final ~4 minutes of pedaling are up a wall. You know that scene in Mission Impossible where Tom Cruise climbs the outside of the tallest building in the world? Yeah, it's like that. Steep in the sense that some people were paper-boying the finish climb. 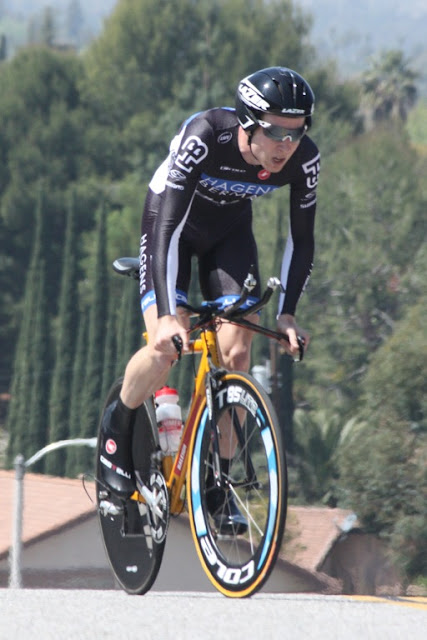 In this next picture, I am in literally my easiest gear. And I am pretty sure that's near the flattest part of the course. This is why I didn't win. 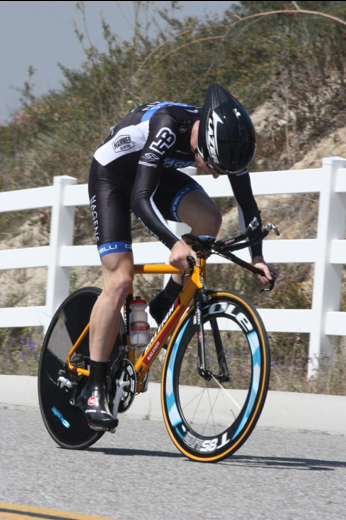 Last year I was about 100th. This year I rode so hard that I am pretty sure I popped out two ribs, partially pulled a hamstring and almost ran over a spectator. I was about 45 seconds faster than 2011 and I think 66th.


Team GC Battle update-
Danny Heeley CRUSHED us to take the early lead in the real race. The beating your teammates race. This is an important position to hold, because then you always get to ride in the front seat of the car!

120 miles of bike pedaling with large amounts of people. Last year, I crashed approximately 7 minutes and 25 seconds into the stage and spent all day riding with my ass hanging out of my shorts. I got fantastic sunburn, and still have the weird tanlines from the holes in my shorts. I was planning quite hard to not do that again this year. 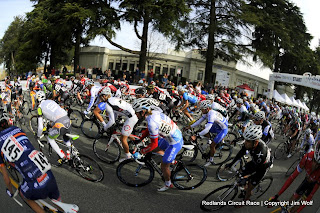 Important information about this stage-

-About 47 people received fines for urinating in public. During the race. All at once. As in a mass pee break called by the race leader. However, I avoided this fine. Here are the reasons-

- I spent the majority of the first lap chasing back on for dear life after breaking a spoke in a
terrible spot. Instead of drinking water, I relied on my camel-like water stores (that water is
stored in the back of my head. I learned that my skull is quite long and alien like when I saw
my film debut)


- Since I hadn't been drinking water, I didn't need to go to the bathroom when the heftily
fined pee occurred. Also important to know, I was still off the back when this happened. I
dare  you to tell me a time in my life where I was more excited to see 47 men urinating on
bushes than I was last Friday during this bike race. This meant a free ride to get back to
the pack!

-Jon ran into a wall during the race. He didn't get any sort of road rash whatsoever. I KNEW Moto-Bros were tougher than the rest of us bike racers.

- I watched a guy point out some road furniture, then PROMPTLY crash into said median. Thanks for the warning, dogg!

- This stage was the introduction of our new White Aero-Race jerseys from Castelli. These things are skinsuit-top like jerseys. The main learning curve? Figuring out how to take them off once the race is over. 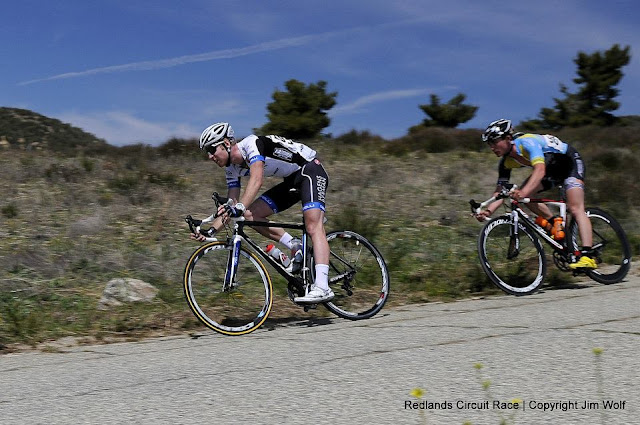 - I came unglued the last lap, about 30 seconds from the top of the last climb. Then chased as hard as I could for the next 10 k, with the lead group in sight the ENTIRE way. Last year I lost 8 minutes on this stage. This year, only one.

Team GC Battle Update-
Heeley is determined to hold his lead and finishes strong in the lead group. Jon runs into a wall and still scores a strong second on the stage (in the team race, of course), and I finish the team podium with third.

Normally I'm not down with the Go-Pro videos for durations longer than 12 seconds, but I think that this one is appropriate.


Summary if you didn't watch it. He pedals, then does a 180, more pedaling, then a right left chicane, followed by another 180 with brake-checking, followed by a right, right, BRAKE, right, left, right, hill, finish. With lots of braking and accelerating turning and pedaling.

Alright, I learned last year that this race SUCKS in the back. The field is so huge, the race is so fast, and the corners are in such large quantity that you basically can be about 3 corners behind the leaders. The entire race. So I knew that the start was important, and I fought to chop Danny on the line so I could hopefully steal his team gc lead. Fast forwarding through the entire crit, I had a pretty great 75 minutes of racing. Unfortunately this race was 90 minutes and I went the wrong direction for the last 15 minutes of it. 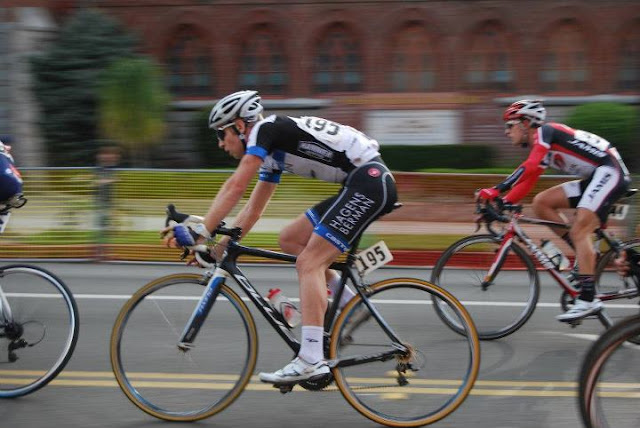 
Team GC Battle update-
Danny valiantly defends his lead. I try to get back the 5 seconds that Jon had over me, but much to my dismay he marked me the entire race, finishing directly behind me, even though he didn't know the race was ending.

Stage 4- Sunset with no sun

Turns out that 100% chance of rain means just that. The best way to describe this course is to think of a roller coaster. Instead of motors pulling you up to the top, you have to pull yourself up with rope. Then while going down the other side you are required to every so often stick your hand out and smack the support towers. Unlike a varying up and down rollercoaster, the Sunset loop is shaped like a mountain. 4 miles of climbing, 4 miles of descending. Repeat, if you're really good (like 18 guys were that good) 12 times. The rest of us get pulled after X amount of laps. However, this course is really psychotically fun. Like the kind of fun that you feel kind of guilty enjoying because you probably won't be able to walk very well after racing. 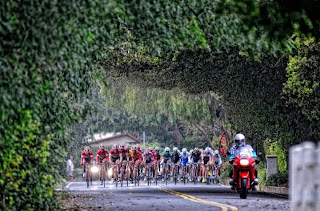 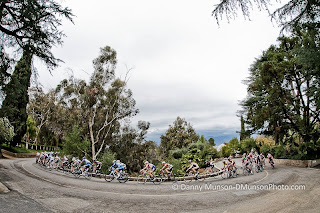 Oh my gosh! Look how beautiful! Well that turned into THIS- 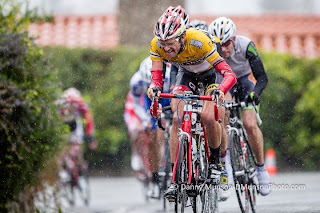 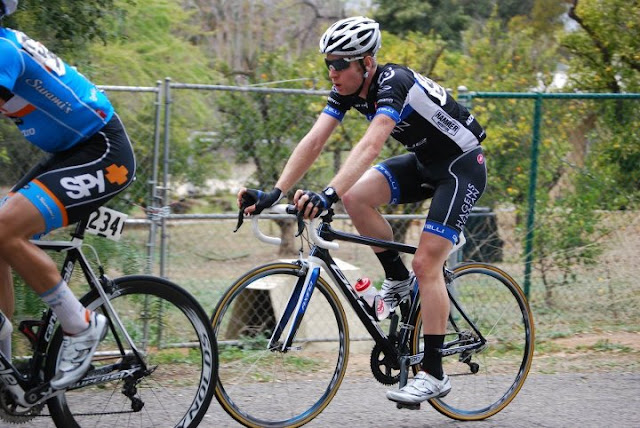 Turns out that proper style doesn't keep you from getting dropped, but I do think that it helps with other things. Mainly checking the time.

I finished in a LARGE group that was "racing" for about 60th. After you get pulled, the officials take one of your numbers so they can accurately score the groups. Apparently my number got eaten by the Sunset monster because I was listed as DNF. Which really isn't important, because finishing around 65th in overall GC doesn't really matter. But I finished darnit! I don't like dropping out of races, which is why I rode in a grupetto for 4 laps in the pouring down rain improperly dressed. So let's say I got... 68th on the stage.

I finished in a group with Danny, David and Gabe. Where was Steve?? The Lil Bugger lasted quite a long time with the front group and won the stage. The team stage, sorry. Jon knew that the team gc battle was close so he attacked us the last time up the hill. What this meant is that when we got pulled, he had to do another cold lap in the rain! Sucker! Steve made up a lot of time on us, but Jon ended up winning the Team GC race with his late race attack. Danny held on strong for 2nd, and with my apparent DNF on the last stage, Steve surged into 3rd on team gc.

The prize for those bros is they get to clean my bike if they want to. 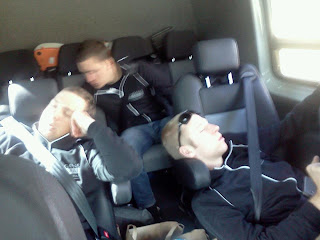 Important to know-
A) I can't sleep in moving vehicles. I am absolutely faking it in that picture. No matter how
comfortably I am sprawled out across the backseat with an eyemask/earplugs in,
immediately after completing a stage race, at 2 am, I won't be able to sleep.

B) I was in cars from Seattle to 2Sawn and back. And I didn't drive once. Thanks Alan and
David!

Ok Redlands, for my birthday I expect two medium gifts (based on the difficulty of the crit and Beaumont), one large gift for Sunset, and one Ferrari to make up for my busted ribs, hamstrings, and world after the TT.

- Based on Strava, I learned that Steve did the TT climb 30 seconds faster than me. 30 seconds! The fun behind this is that I covered the first 3k 36 seconds faster than Lil' Steve. So I still beat him in the TT. This shows the loco-ness of the course. I used a TT bike, disc, aero helmet, and DEEP front wheel. Steve used a road bike, light wheels, and regular helmet with my aero plastic cover. So since our times were so similar, does that mean the equipment choice doesn't actually matter?

- I saw Tela TWO TIMES! Last year she came up and chilllllled for the afternoon one of the days, and we had a quite unproductive afternoon. The goal was to top that day from last year, and oh my golly-goodness did we succeed. We went to TWO coffee shops!!!!! Then she came to watch the crit- Important to know is that she was wearing a white watch. It aint easy being steezy.

- In the Beaumont stage we did the first 15 minutes of the race with an average speed of 35 mph. My heart rate average? 62 bpm.

- After the crit we had a dinner at one of the host houses. And by dinner, I mean feast. Tela also came to this and even though there was much heckling, she refused to race the USAC crit the next day. Kennett stole one of David's meatballs, and then Tela stole the remaining three. She then proceeded to blame everything on Kennett, which is shockingly believable. Basically what I'm trying to say is that T.Crane fits in on the team.

See you next year Redlands!Tweet
Posted by Ian Crane at 12:14 PM