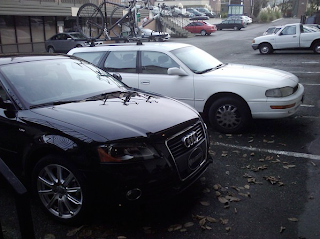 Man, I hate traffic. I like my car, it has personality. I like to drive it, and I drive it... quite frequently. However, it gets TIRED in traffic. Nowhere near as tired as Steve's car of course- We left Bham at the same time, he drove behind me for awhile, chopped me in Mt Vernon, and then I didn't see him anymore. Turns out his car needed a break and he pulled over to let it rest.

The swagger wagon is awesome. Its record for things INSIDE is 5 bikes, 18 wheels, 3 duffel bags, 1 box of parts, and 2 people. With 2 more wheels tied to the roof with course tape because they didn't fit, anywhere. 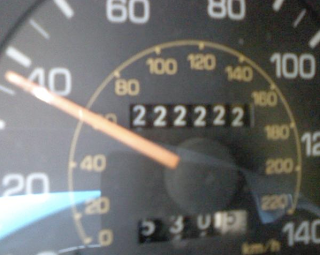 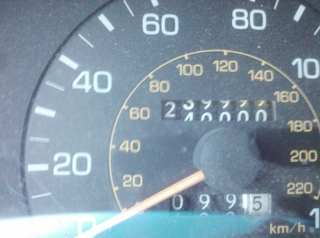 Steves car is also spacious, and is quite stereotypical. I just stepped out into the driveway to snap this picture! 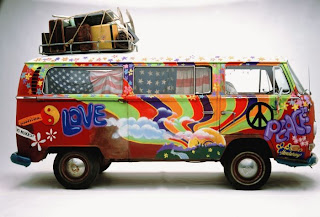 Anyways, to the ideas. I started talking about traffic, but took a pretty big detour because I don't think that I have talked about my car once in the history of this world and I figured if I did, and used lots of captions, when I google search "swagger wagon", a picture of my car will come up. Instead of this-
Alright, snap back to reality.  I have figured out what it is going to take to eliminate traffic. Forever. The answer lies in a combination of fear and strict attention to posted speed limit regulations. It's pretty clear that the new variable speed zones in Seattle do absolutely nothing to negate traffic, and I blame that on people. People just can't be bothered to slow down to 45 when going 60- I do it myself! Why slow down to a speed that allows it so other people can merge easily when you can go 60-65, angrily swerving while playing Angry Birds, and have to slam on the brakes when someone merges onto the freeway at 43mph, (not going to talk about that..), causing a chain reaction of braking, eventually causing traffic. Or maybe there is a Prius driving slow in the commuter lane? This is where the fear comes in.

In order to combat traffic, the act of speeding needs to be feared. Unfortunately, the fear of tickets is not quite enough, as some people just keep racking in those tickets. So in order to fear speeding, therefore keeping speeds constant, therefore fixing traffic, the answer lies in....


Sensored spike strips, randomly hidden along freeways, spaced at random intervals, in random lanes. I'm not talking thousands of strips, just 1 or 2 every 20 miles. When triggered by a certain speed over the limit, POP, crazy slide, lots of sparks, multi car accident, and several people who will never speed again! Hooray for lessons learned!

The great thing about this is that Ambulances, Police, Me, and Edgar Martinez will all have sensors on the bottoms of our cars that will block the signal transmission to the spike strips.

So if you're planning on speeding, you better have one heck of a reason.


And in other news, I made it from Bham-Seattle in record time this weekend!


(ok fine, this is a pretty poor idea)


Here's another idea!  I'm sick of all these sports that just are the saaaameeee time after time. Specifically I mean figure skating, bmx, 4 cross, downhill skiing, and hockey. I think a cool sport that someone should invent would somehow incorporate all of those, into one crazy time.