I had decided to write about how there may have been a bike race in France going on, but the real bike racing was happening in Bend, but someone else submitted their blog entry first so ignore anything I've said so far.

I left all of you hanging with a hint of future success in the crit event, mainly because of the skinsuit I chose to wear. We'll jump back to Bend, Saturday afternoon, post just submitted. I'm feeling pretty good about myself, seeing as I just out-blogged Kennett. I put my skinsuit on and ride to the course. Reverse even earlier into the day, and we had just rode to the course to drink coffee. I had crazy good sensations because I ordered the same coffee as someone on Pure Black, meaning that it was likely that the crit skillz were coming. So the combination of skinsuit+flat white+winning blogging race = perfect crit race, correct? I'm going to leave you hanging just a bit.


I have a story to tell. It's about a man, a tall man. One who would rather race a timetrial then a crit. One who prefers long, painful road races to short and snappy criteriums. Someone who I haven't done a criterium with in quite some time. This is also the same person who on Saturday night I saw doing all sorts of crit shark things- Here are some examples
So here's to you Sir, a newly reborn crit racer. May the world of bike racing open in front of your eyes.

Anyways, I didn't win the crit. Apparently people are fast enough to lap the field on this course, and while I didn't shift out of my 53x10 the whole time, I also didn't factor into anything. It's ok though, because I'm only 16. My cousins came out to watch, which is always great. They didn't bring their dogs though (Cmon Milena and Ry!), but it's pretty cool to see them somewhat often because of this bike racing thing.

Colin could only be bothered to get third place in his crit, but when I got back to the house he and Steve were already celebrating. (Side note- He won pretty much everything else that mattered, because he's ONLY 24),

Feeling pretty tired at this point, I took 34 Hammer Nutrition REM caps and tried to sleep, but to no avail, so instead Lang and I took Kiwi-Knowledge quizzes. We talked about Boikes until I was knackered, then went to bed.

Sunday is the last day of the Boike race, and it is also the longest stage of the race at 80-something miles. 5 laps of the Awbrey Butte course. In the past I've had some fairly decent rides on this course, so I was pretty optimistic.
And then a couple laps in I got dropped pretty hard on Archey Briggs!!!! I stayed in the 20+ car long caravan over the crest of the climb. I knew that if I could stay in the cars, I could get a round of bottles for the guys left. So I took bottles until I recovered, and made my way back to the group to distribute.

I got Lang TWO bottles, which is the equivalent to letting the beast out. He went uphill faster then most and had a pretty good result on the day, which I think probably had lots to do with the two bottles I got him. If we only had one more guy..... Here is a video of what happens when you give Lang 2 bottles-


Logan, Lang, and Cody were our only finishers on the day, which really secured our spot in Team GC. They were paying close attention to riding together as a team, and luckily they didn't need just one more guy! 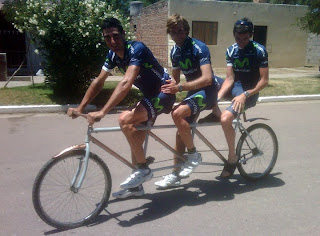 Some local racing this weekend, then hopefully some big crit racing in August. There is still much fun to be had.
Tweet
Posted by Ian Crane at 11:42 AM