Wise Words From a Local Resident

10+ hours of driving later we arrived in Boise. And by driving, I mean I sat in the passenger seat and Cody sat in the back, because in exchange for a free lunch Steve drove the whole way. That is similar to how I plan on hanging around in pool halls, challenging people to high risk financial games of pool, losing the first one (on purpose), and then going quadruple or nothing on the next one and winning. Conned. 10 hours of driving > one salad, but luckily Steve was ok with that deal.

We stopped to ride in Pendleton, which is apparently home to one of the ten largest rodeos in the world... I didn't see any rodeos, but a local did call us out for "dressing like you're about to ride a long ways" even though we were only riding for one hour.  It was a really scenic ride that had a tailwind in both directions!!!! 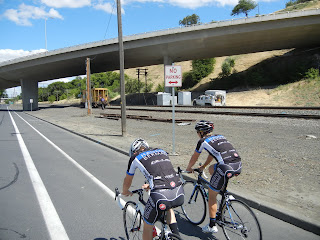 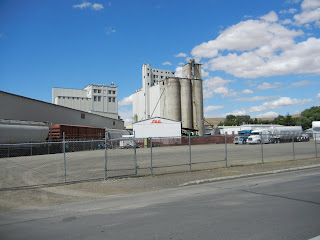 Boise is home to the Exergy Twilight Crit, one Performance bike shop, one jail, and a really mountainous ride loop that we rode on Friday.

Unfortunately, I got pretty sick on Friday, and woke up feeling worse on Saturday. I decided to start anyways, because USAcrits gives lots of points for race starts, and maybe just maybe racing would bring me back to life. Long story short, it did.... NOT. But the plus side of all this is that my USAcrit series start points moved me up two places in the overall standings, even though I did not finish. On to the next one.

There are LOTS of pretty girls in Boise. Lots and lots, and I had plenty of time after I pulled myself from the race to network and compare astrological signs. However, I talked to none of them. But I did talk to two crazy people and one self proclaimed "Real Ghetto Man". I pulled myself from the race when I couldn't hold my breath any longer, and then I rode around trying to find a quiet spot to chill and maybe trick my pneumonia-esq lungs into working again. This was harder said then done, because the 20,000 people that came out to spectate were kind of everywhere. I found a somewhat isolated bench and was angrily texting myself when an extremely tall guy, who was visibly drunk, smoking a cigarette and wearing a LA Lakers jersey stumbled up and sat down next to me. Some highlights from this conversation included: