Cascade stages 0 through something

In 2009, Lang Reynolds almost won the historic Milan San Remo. This is the story of Hagens Berman at the 2011 Cascade Cycling Classic. 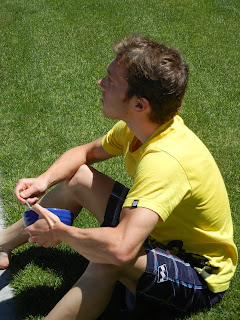 Racing started with a prologue on Tuesday, where I rode I think pretty fast through the straightaways, but when I got to the tetris section of the course I didn't go so fast. The first 90deg right hander on a bike lane wide section was pretty basic, I made sure to hit the brakes there, then again when I turned 7 more times. I did however pay extra close attention to looking really handsome and photogentic the whole time and it worked, because I got a picture on Cyclingnews.

As prologues seem to go, it was a pretty underwhelming result and I was quite nervous about the ~15 seconds I lost to the race winner. I knew that those 15 seconds would be pretty crucial the next day when we went up an hour long climb, and then another 20 minute long climb. And by that I mean that I survived the first half of the climb with the leaders, and thought I was doing alright until I realized that I still had 30 minutes of climbing to go. It's ok though, because I was in a group with 40 of my new closest friends, AND I didn't signal the upcoming corner unlike my teammates. Also, I just found out that I am racing Kennett to see who finishes typing a blog post first so if all of a sudden this just ends kind of like an episode of the Sopranos, it's Kennett's fault. 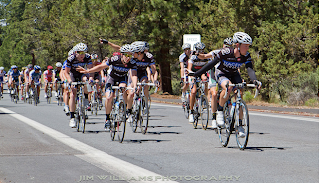 Thursday was the time trial that I've done at least 12 times, and done it fast on zero occasions. Luckily, I made sure to warmup in numerical order so that nothing would be confusing to me and I could focus on going as fast as I could. Looking at my strava data I was about 3 minutes slower then Lang on the climb out but then on the way back down I put 6 minutes into him to finish ~30 seconds faster, and ALMOST make it into the top 100 for the first time all week! If that math doesn't make sense to you, my downhill split was significantly faster then Langs because he had to do a bike change at the top to get off of his fixie uphill TT bike, and get on his downhill specific TT machine. 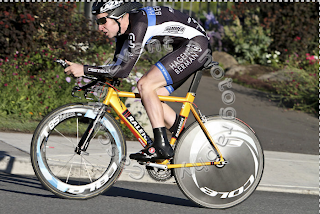 An almost hot day meant that we could go sit in the Deschutes River and soak our TTired legs (see what I did there?). Since it was below 80 degrees, none of the locals were out except for one kid who "didn't want to get his inbetween waist and thighs cold" by going that far into the water. I also didn't want to hurt that area either, but I also had to see who was manlier between Spencer and myself so I walked in with my pride intact. Meanwhile, Steve walked in half as far as the rest of us did. After the river, we accidentally saw Jordan Campbell, then Spencer and Winger had a battle to see who could eat the most protein. Here is a picture of what Spencer ended up eating- 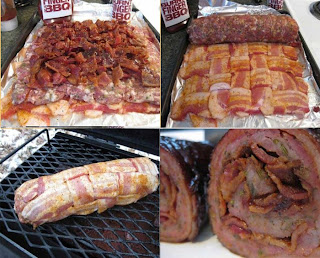 Meanwhile, Kennett ate cereal. And speaking of Kennett eating, besides Cereal, here is his exact diet. 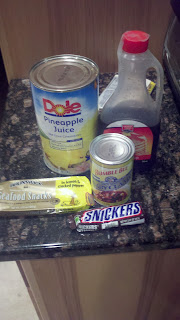 Then Colin got here, and the party really started. And by that I mean that he pretty much instantly broke the TV, which brought tears to Lang and Steves face. Luckily, Kennett and I are strong in the face of adversity, and fixed it. Phew, we almost had to do something like.... talk to eachother.... but luckily the TV got fixed.

Friday was the second road race, which going into it I wasn't too worried about it, but then suddenly Thursday night I realized that this stage was gonna be a real slobberknocker . I've done 80 percent of this stage before in the Cat 2 race, but the darn right hilarious part about that is A) the cat 2 race starts one mile from the top of a climb and B) the Cat 1 race starts in town, rides ballistic speed neutral rollouts, then starts climbing for 40 minutes to get to where the Cat 2 race starts. 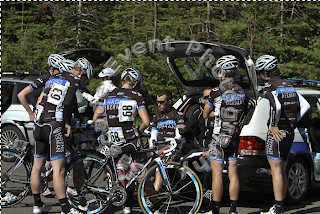 So the real humor behind this is that if you get dropped on the first climb, you have a ridiculous long day in front of you to try and not get time cut. ALSO they only allow 150 riders to race the crit, so my 137th place on GC going into the day was slightly scary. The section between the first climb and the last climb is ~2 hours of slightly downhill headwind, aka you lose if you get dropped. So I tried real hard to not get dropped on the first climb. I decided that the best possible place to get dropped was the section near the parking lot where the other races were staged (1 mile from the top) so that as I was getting dropped lots of people would see me! It worked out great, and I went backwards through the spectators. Then I followed a psychopath Fly V guy downhill through the caravan and caught back on with relative ease. Then I sat in for 2 hours and then got dropped on the finish climb and rolled in around 2 minutes back on the leaders.
PS- Steve sprinted the grupetto.

So my first top 100 of the #CCC came on the queen stage! Hooray!

Tonight is the crit, and tomorrow is the Awbrey Butte circuit race. Going to wear the skinsuit for optimal speed.