For those of you who aren't friends with me on Facebook or follow me on twitter (what's wrong with you?), I leaked this photo on Friday: 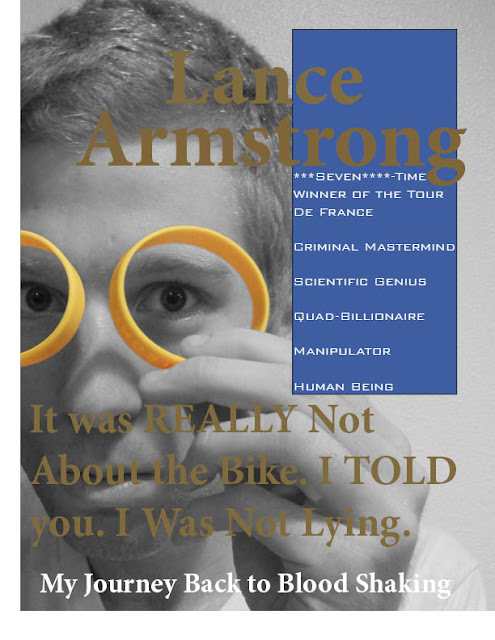 It's quite obvious- this is the cover for my novel. If you don't get the joke, this cover design was not inspired by anything.

Let's get right into it.

Lance Armstrong is/was a talented athlete. With his accomplishments you have to believe that he has a tremendous work ethic, fantastic genes, incredible skills and genius tactics. Steroids or no steroids, the man was a gifted bicycle racer and an dedicated athlete. Sure, all the above are greatly benefited by the use of performance enhancing drugs, but in order to see the truth behind his doping success you must accept all of these as facts.

Without going into too much history, I'll assume most of you know that Lance Armstrong had cancer that he overcame in 1996. When Armstrong won his first Tour in 1999, he did so clean. I mean clean in the sense of PEDs (performance enhancing drugs). However, the treatment from his cancer was still rushing through his body. As he recovered into superhuman like form, radiation from his chemotherapy fused with his natural bodily synapses. His body recovered from his cancer into a permanent radiation-like state.

No big names raced the Tour that year- Jan Ullrich was injured and Marco Pantani was high somewhere. Armstrong knew that 2000 would mark the return of competition. The return of challenge. This is when he transforms into the dope-test passing cycling monster that came to define his reign throughout the early 00's.

Something had to be done. Armstrong, now full of endorsement deals from his Tour De France success, was rolling in money and resources. From a relatively unknown Texan to an international superstar, he had not only the funds but also all the newest technologies at his fingertips.

It was no secret throughout the Armstrong reign that he always strove to have the best equipment, the most scientifically proven training, and the most aerodynamically efficient position achievable. It's common knowledge that Armstrong put Trek stickers on a Litespeed time trial bike because that frame was more aerodynamic than Trek's model. It's not confidential information that Armstrong chose to have downtube shifters on a mountain stage because they weighed less, or had helmets specifically designed for the shape of his back. Armstrong was always willing to find that extra 2% and that transferred across to his mechanism of cheating.

With unlimited funds and resources, Armstrong contacted an unknown (at the time) doctor named Allen Lim. Allen was looking to make a name for himself and his new product- the red blood cell duplicator. This is where the science, cheating, and health defying behavior comes in.

Lim implanted Armstrong's left wrist with a transmitting device. This device serves as a miniature blender of sorts. When activated, it starts vibrating rapidly. Think of a paint shaker at the hardware store. This transmitter, hidden inside of his wrist at the location of the highest density of veins in your arm (the place where people cut themselves to bleed profusely) , shakes so violently that every individual red blood cell is temporarily split into two. Duplicated by force, the available red cells double, doubling hemoglobin and greatly increasing the amount of oxygen that gets to your muscles. When activated, this transmitter acts as a boost, a Nos type accelerant that temporarily increases your ability to bring oxygen to your muscles.


The genius part behind this idea? The part that made Allen Lim rich and Armstrong famous? The damaged red blood cells cannot survive in their smaller (but higher quantity) state. The broken off duplicates of the original cells die, making it virtually impossible to notice in any sort of drug screening.

Again, you must believe that Armstrong is an incredibly talented athlete. A fantastic bike racer. With the addition of this red blood cell duplicator, he was able to go past 100%. He had a trick up his sleeves in all sense of the phrase.

What was the transponder hidden in? 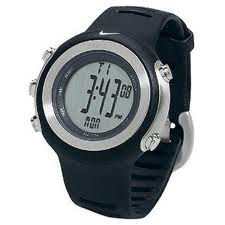 The band of his Nike wristwatch. When Armstrong pressed the Mode and Start/Stop button simultaneously, the duplicator was initiated. Activate turbo-attack.

Then disaster struck at the 2003 TDF. Armstrong won by the thinnest of margins- a slim 61 seconds separating Armstrong from second place. Something had to be done.

Pay attention to the left wrist: 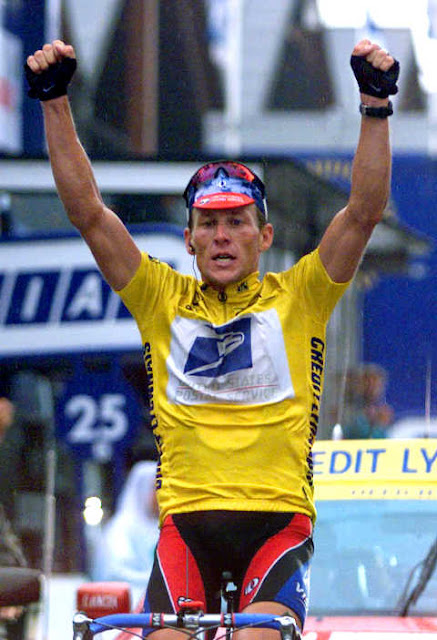 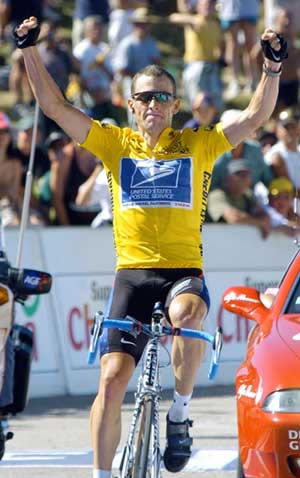 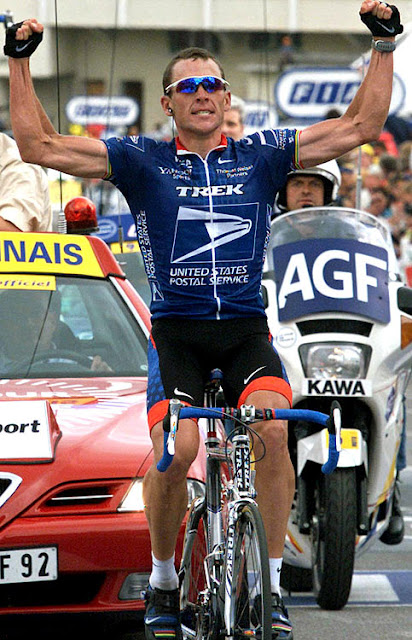 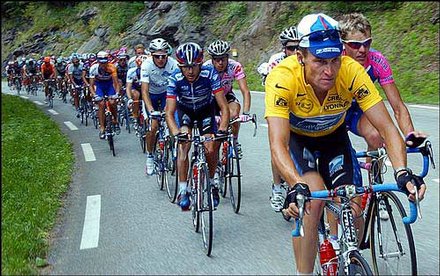 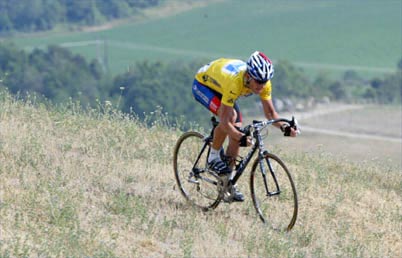 Every photo, every win and every race-changing attack, Armstrong was fueled by the red blood cell duplicator.

However, after the 2003 Tour De France it was obvious that the red blood cell duplicator was no longer as efficient- his attacks weren't as deadly and his time trialing wasn't as swift. Time to re-hire Allen Lim.

After several multi-billion dollar scientific studies and days of research collected, Lim found out the problem with his transponder. The metal in the watch strap and watch casing was delaying the signal to the wrist transmitter, and Armstrong's aging blood cells couldn't adapt to the delay. It was time for a change in transponder. Re-injecting a new carbon fiber cased transmitter (to replace the titanium model) into Armstrong's right wrist, it was deemed that in order for this to continue to work, the transponder must not have any metal interferences whatsoever.

In 2004, on the eve of the Tour De France, Lance Armstrong's cancer foundation, Livestrong, introduced a new way to show your support to the public. Lightweight, yellow, and all silicone, the Livestrong bracelets exploded in popularity. The perfect cover for blood cell duplicating masterminds like Lim and Armstrong.

The silicone in the bands did not interfere with the signal transmission, and their immediate popularity made Armstrong fit right in with the crowd. How could he be doing anything illegal? He's just like you and me.

With a very non-retail Livestrong bracelet, Armstrong was able to flex his right wrist twice to initiate the shaking.

Check out the right wrist, and what's noticeably absent from the left: 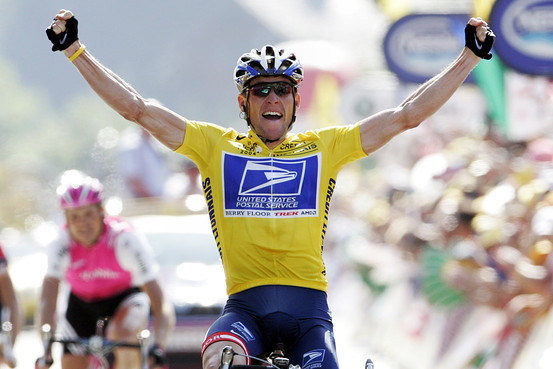 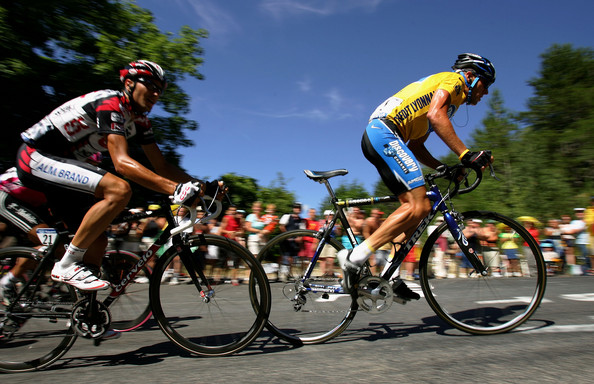 It might be hard for some of you to believe this. It might be hard to see past the fact that Armstrong was an incredibly talented athlete and won 7 Tour De Frances *mostly* on his skills and strengths. What you have learned today is that a rich man teamed with a brilliant mad scientist to uncover a new method of body manipulation. One with properties so advanced that even medical geniuses don't understand the possibilities. You may be questioning how a blood cell could split in two and survive, but what you should be asking yourself is what CAN'T a blood cell do when it just Live(s)Strong.

Hey Mr. Armstrong, did you cheat to win all those bike races?
Finally, no wonder he was good at bike pedaling. His head is TINY! 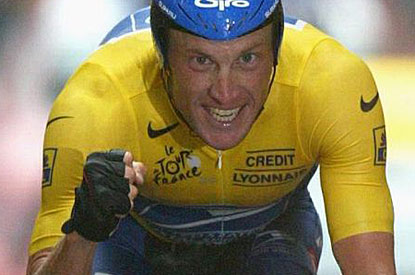 (note- this is a work of fiction and if this is true I expect job offers from the FBI, WADA, Encyclopedia Brown, and the Harvard School of Blood Shaking.)

(also important: in no way is this a reflection on the LiveStrong foundation)Tweet
Posted by Ian Crane at 10:33 AM