Can a moment be forgotten if it was never known about in the first place? Is it still a moment?

Recently I got a new telephone. This was a pretty big experience for me because now I have a phone that is capable of making phone calls, as well as all that other fancy stuff. My old one didn't do much except check Twitter (which it was EXCELLENT at). Moving on, when I got my new phone I made it my non-exciting, lazy-life goal for the day to determine if any of the photos on my phone didn't need to be there. I'm all about saving space when I have a new phone with huge memory. I'm all about efficiency, and I'm a straight shooter.

Speaking of photos, with this new phone I finally was able to have the technological advance-ness to become an Instagram kid. This is something that I've mocked for as long as I had a phone that wasn't capable. However, when Tela told me that Instagram was going to be the next Friendster- sorry, the next Myspace, Facebook, Twitter, etc. -, I knew I had to join as to not get left in the dust of human advancement. Not having Instagram would be as shocking as Tela not having a PayPal account. What is this, the 1940s?  As soon as I entered the modern world, I jumped on the opportunity to take artistic photos of boring things: 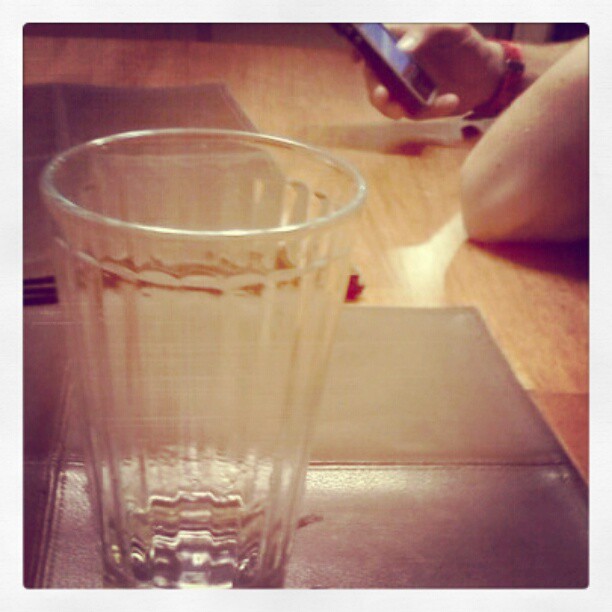 I'm all confused with my direction of this post now. Let's summarize. Forgotten moments , new telephone, new capabilities, looking through photo galleries, Instagram, making fun of Winger, making fun of myself, making fun of Tela not having PayPal, artsy photo.

Oooooh I remember my direction now. It's pretty obvious when I look at it all separated by commas in one long sentence. What I discovered when I was looking through all the pictures on my phone is that I have a lot of spare time. That and I have several photos that were never tweeted or blogged because they just didn't fit with the mood at the time. Let me tell you folks, at this moment, the mood is right.


The cell phone pictures that weren't eligible to go into other posts but still hold special weight in understanding my life, my friends lives, bike racing and also other stuff.

This is what happens when you have a van that has lot of seats, but two of those rows of seats are filled up with ~8 bike boxes + luggage + Hornbeck's DJ gear. This also only happens when you are doing a 3+ hour drive when you could have just flown into another airport. This is a special picture because you may notice that Honest Gabe is sitting in a seat. This only lasted for about a minute because he would rather be in discomfort then have anyone else feel that discomfort. 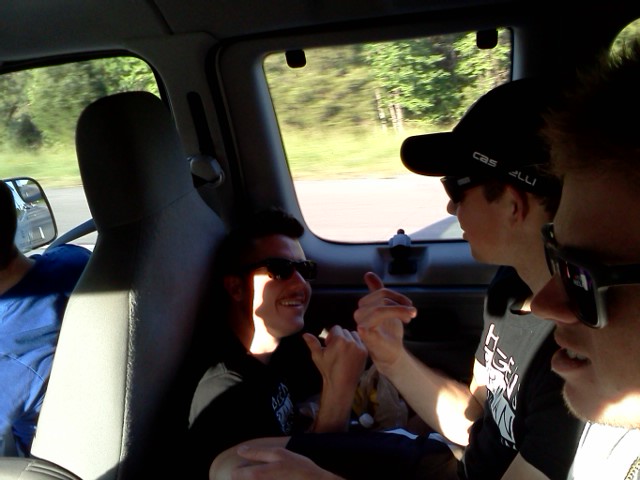 Next, when traveling with THE Joe Holmes, road rules do not exist.  Please note that Joe is the driver of the black car next to our van. By that, I mean the white car that is in front of our van. 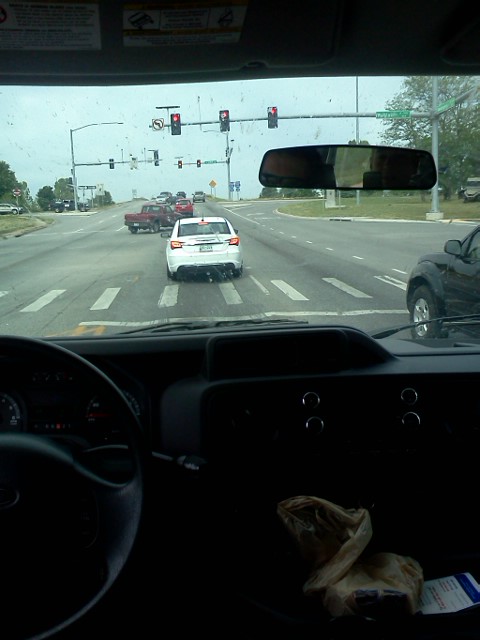 This is how you feast if you're name is David. This burrito place in Arkansas was excellent, and this double-sized burrito, with double-sized chips, and less-than-single-sized salsa was just the solution to a stage race. The greatest sadness of this trip was when David left the second half of the burrito in the fridge instead of taking it with him on the airplane. This caused a great pain in my chestal region (that and my broken sternum). 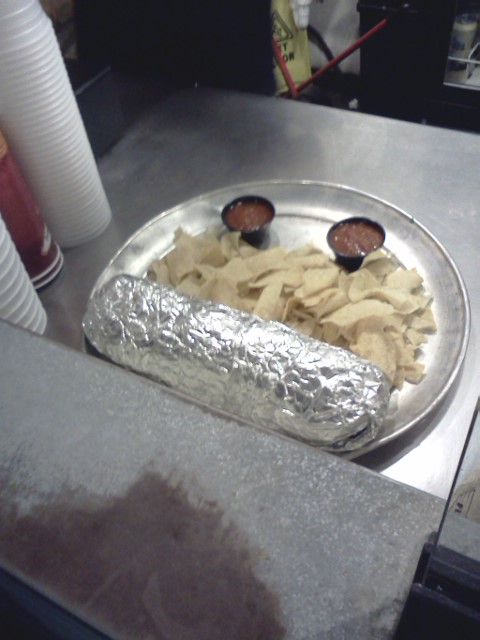 Another picture from Arkansas. Turns out that I was too busy feeling sorry for myself for crashing in every possible situation that I didn't share EXCELLENT photos (getting cocky here). In a desperate search for FroYo, HeeleySwag, David and I accomplished our goals. However, we had to walk there and that was the most tiring thing I had to do all season*. David was thirstayyyyy but this fraud of an establishment didn't have sippy cups. Please note that this is not yogurt in the bowl that David is sipping from like a dog, but instead crisp, cool water. Also funny that there was a place to get water from but no device for water transportation into your belly. Very strange. 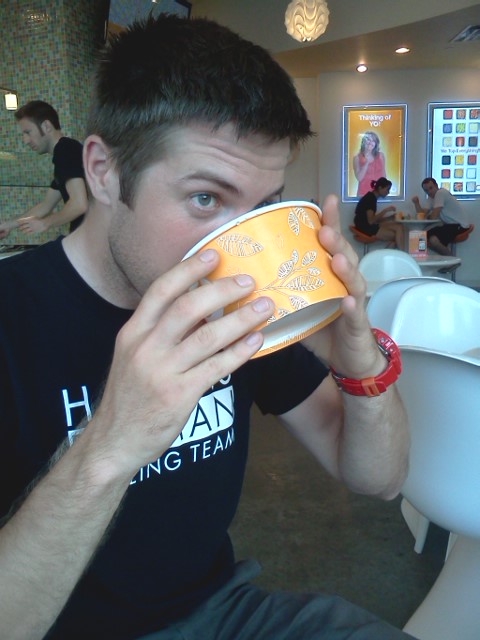 Perhaps one of the most common scenes of the 2012 season. Kennett eating while his teammates struggled to do a task that they just needed one more guy for. Before you get all snobby and yell at me for documenting this moment instead of helping, this was also from Arkansas. Plus, everyone knows that I do my workouts with 6-8lb medicine balls and a van seat is WAY too heavy for me. 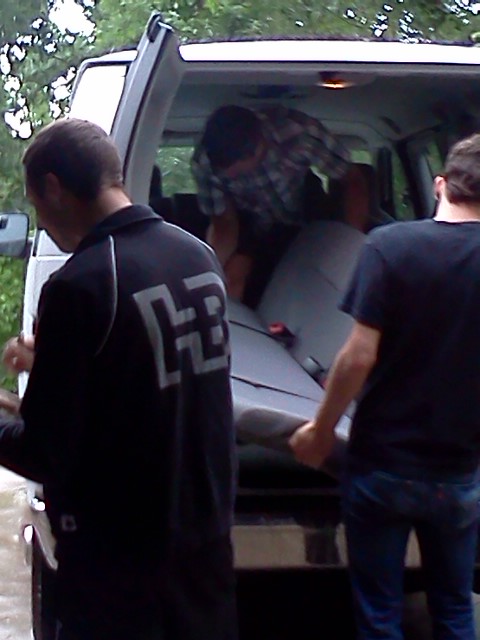 Another Arkansas. Perhaps the most fitting photo of @horndogbrocal ever captured. Although I don't really get the basketball reference, this was sign that was made for us by one of the host families. They had a huge fiesta on the crit course where Gabe got drunk off of one sip of beer immediately after finishing a very difficult race. 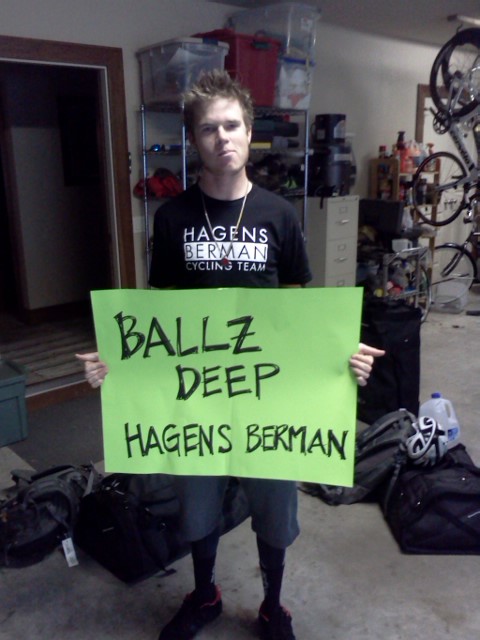 Kennett's bag never came and he was lucky because we were flying in the next day and were able to pick it up for him. He asked me to get it from the office, and this was waiting for me. 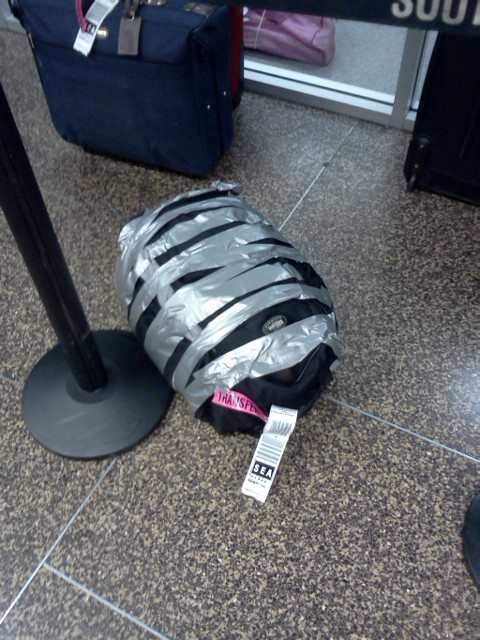 In the photo gallery "KP gets angry while waiting for food" but also in the #CamoWaffleHouseHat category of life. Please note my finger over half of the camera lens. I didn't have Instagram yet so I was trying to add a fancy, homemade filter. 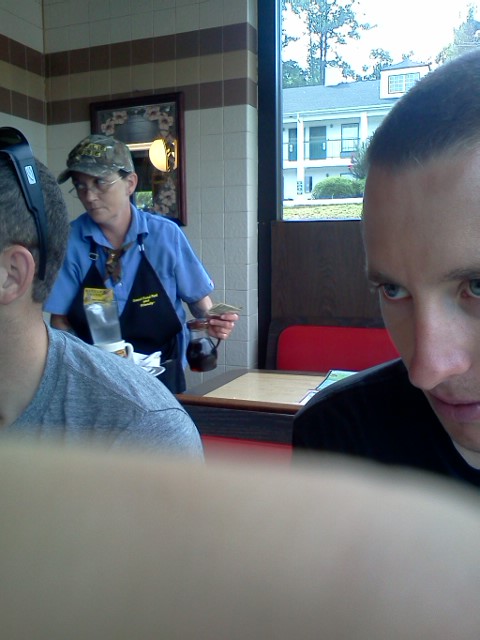 After a quite pleasing team victory at Tour De Delta, Heeleyswag, David and I went exploring (in search of FroYo (a weird, reoccurring theme with the three of us)) the White Rock area of Canada. We were the only people in this entire waterfront village that weren't on a date, so we sat and creeped on everyone else. A couple with matching crocs stays together. 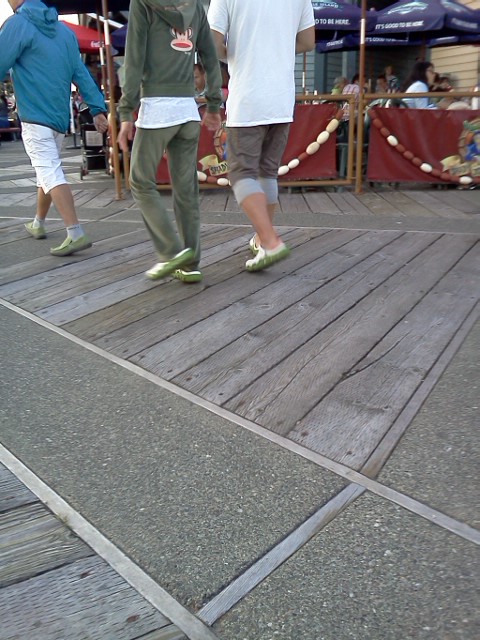 There you go. Just some moments that never originally happened but now can happen and be considered moments because they can't be forgotten since now they exist.

I'm very angry at myself for having a lull in blog posts. I was supposed to be doing homework this morning, for the first time in a while, so naturally I wrote a blog up instead. Now I'm going to fail school because of all of you and you'll have to provide for me monetarily and foodetarily for the next 7-10 years while I try and redo this class that I didn't do the assignment for because I was putting pictures onto the internet.