The greatest experiment of all time

What I am about to share with you is a true story. This truth comes from my heart and it follows my blood stream through my weak- toothpick-like in stature yet gorilla-like in hair- arms, into each one of my fingers and aggressively pounded out onto the keyboard which sends some sort of nerdy signal to the screen completing the truth cycle by making words.

For the past three months, I've been conducting which turned out to be the most near-death social and educational experiment that is possible within the realms of humanism. What I'm about to share is something I am very proud of, quite terrified by, and slightly (only slightly) amused by. What am I talking about. I am THOROUGHLY amused by this experiment.

This is the story about how I beat the entire college education system.

As background, my path towards a college degree has been ... labored. I did two and a third years of time at a facility in upstate Washington. Side note- this place is where I had THE BEST mugshot ID card of my existence.
After being deemed "educated" I was paroled with the possibility of progression. They said "here's your AA degree, get out there and be somebody!". They did not give me a free suit when I left AND some of my personal belongings were missing. Thanks a lot Whatcom CC. However, soon (immediately after) I was back inside, my brief freedom halted in order to serve more time within this system. I began plotting my way to stand up for myself and for my people who were doing the same time that I was. Much like how Andy Dufrane locked himself in the Warden's office to play sweet, sweet Mozart over the speakers into the yard, I needed some form of hoorah. I needed to do something that could prove that although I was identification #869618, I was an individual. You might take my time, but you will never take my freeeeeeeeeddooooooommmmmm.


At Whatcom, I took some Spanish classes. I dominated these classes, so naturally since I (with previous experience in the language) could get A's in entry level classes, I probably have a future in the language. My last Spanish class at Whatcom was March-June of whatever year I was there. I finished up my AA that Fall, and didn't have room in my schedule for a Spanish class. That means that June-December I spoke absolutely zero Spanish.


I transferred to Western, where I took Spanish classes from January-June. The language that I had almost lost over the past 6 months of not speaking it was almost coming back to me. Two straight quarters of Spanish classes and just like that I was only TWO classes away from getting a Minor in Spanish.

Excellent news! I filled out the paperwork to get this minor. Then, I was all worried about taking classes for my Major (blogging) so after my three month Summer vacation I didn't take Spanish classes fall quarter. In January, I took my second to last Spanish class. This went quite poorly. The language was gone from my vocal chords, again, and now the classes that are required for the Minor are upper-division difficult classes. I struggled through January to March, slowly regaining some handle of the language and passing that class. Only ONE MORE class to go! I was going to get a Minor. The smart student would have taken a Spanish class spring quarter (March-June) and gotten it out of the way. Oops. This is not something that I did.

Finally, we are caught up to present day. I was entering my last two quarters at Western and I had to finish my Minor. I signed up for a Spanish class to take this past quarter (September-December). It had been since March since I even thought about the language.

Correct, everything was gone again.

The trouble here is that the only Spanish class that I could fit into my schedule was the highest level class available in the department. SPAN497, Cuban History and Film. I met with the teacher before the quarter started in March, and saw the syllabus. The class seemed relatively simple: Watch Cuban films, learn some stuff about Castro, do a presentation, and take two tests. Easy, right?

On the first day of class the Prof showed a short 30 minute film as a welcome to the class.  I listened as closely as I could and had no idea what was going on. At one point, there was apparently something funny said in the film, because everyone in the class laughed. Except me. I knew I was in trouble. However, in order for me to graduate in March I needed to take this class. I absolutely could not drop it for that reason, but I knew that if I waited another quarter the language would be even further away. I had to pass this class by any means necessary.


Here comes the experiment. Can someone with little grasp of the Spanish language successfully pass the hardest class in that department that a University has to offer? I was officially considering myself a poor Spanish speaker. I could understand maybe 60% of what the teacher was saying, and about 5% of what was happening in any of the movies we watched in class. Remember that this is a movie watching class.

Not only was the main point of the class to watch movies in a language that I didn't understand, but it was also a history class. That's right folks, while I was slowly trying to translate basic phrases in my head the teacher would throw out words like Bureaucracy and capitalism and Socioeconomic status. Good!


I'll ruin the ending. I PASSED THE CLASS AND I AM SO EXCITED AND UNBELIEVABLY SURPRISED AND I STILL DON'T KNOW SPANISH VERY WELL!

Here's how I did it.


First, it's important to know that this class had 17 people in it (counting myself). Of those 17, 5 were native Spanish speakers. They sat in the back of the class and hardly said anything, having side conversations which each other in Spanish.. When they did speak, it would be some rapid statement to the professor that no one else would catch, and the 5 native speakers and the professor would crack up laughing. Probably laughing at my Spanish-ignorance. Of the 12 students left, 6 of those studied abroad. These are the members of the class who always would raise their hands and compare the situations discussed in the movie to their time spent in Spain talking Spanish with locals doing all Spanish-languagy stuff while speaking in Spanish and only listening to Salsa music. Of the 6 students remaining, 4 of those were Spanish Majors. These are students who were taking full course loads of Spanish and felt all cool of themselves when they made a comment about something. I smelled the arrogance coming off of them whenever I stammered some form of statement.

So myself and one other student didn't fit in the categories mentioned above. I thought to myself, "thank goodness, I'm not alone!".

His last name was Gutierrez.


There were many ways that I blended in with the crowd. The teacher would ask "does everyone understand?". Of course I didn't, but I didn't need to be all special and alone. Once I asked the professor for help and he got so enthusiastic and spoke so rapidly that I didn't catch anything he said. So I tried to fit in. If the person in front of me shook their head up and down, I shook my head up and down. If the person next to me shook their head side to side, I shook my head side to side. When most of the class laughed, I had a good chuckle myself. I stayed under the radar. I went to class every day. I never once got called on. Great success! 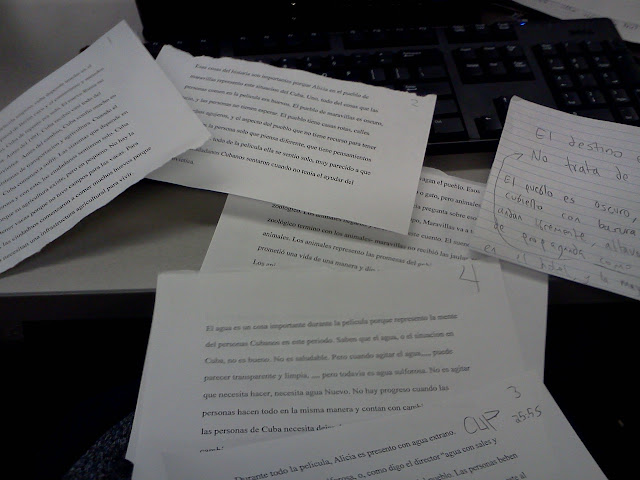 Sometimes this would at least get my point across, other times not so much: 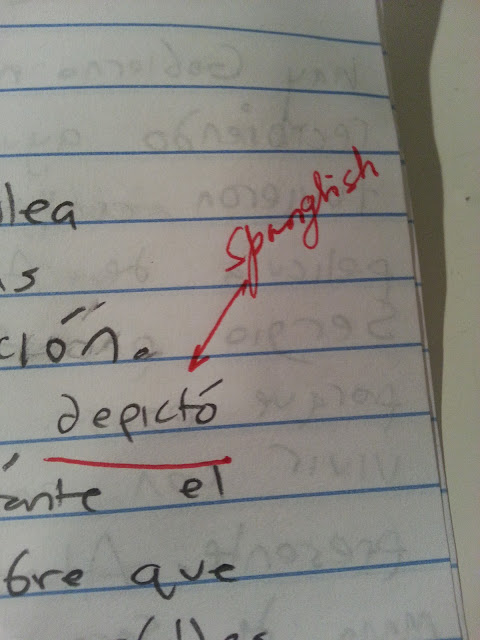 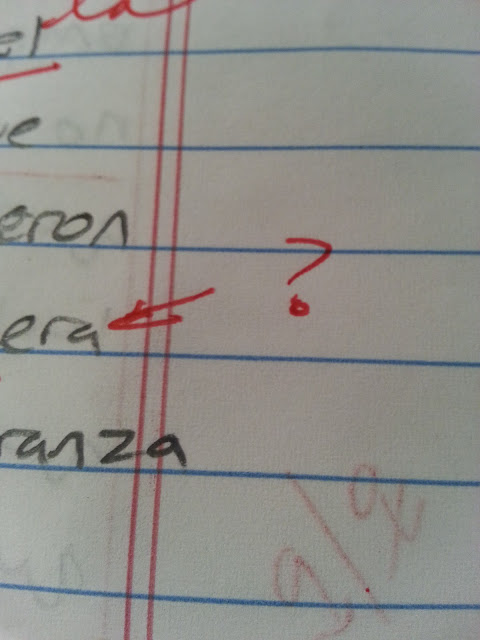 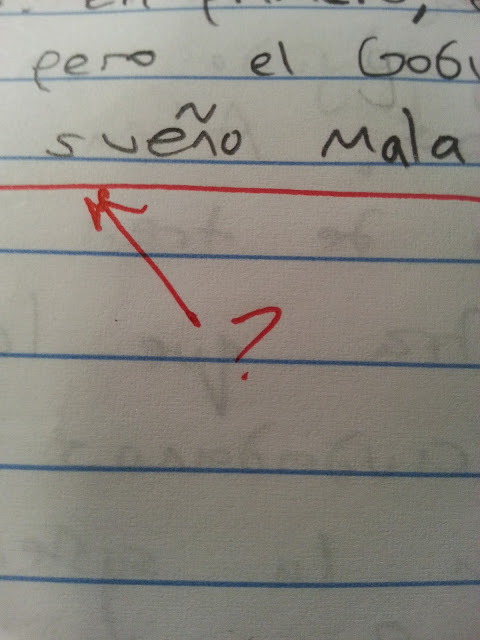 After a lot of stress, a fair amount of concern, and a whole lot of luck, I passed the class. College!