The Bracelet Affair part one

Long time readers of this site may remember one of my first posts ever, and my first Get Rich Scheme blog ever. I listed off my first set of ideas, and there was one that has been consistently on my mind since I first wrote the initial abstract.

To tell the truth, I haven't wanted to compose this because I've been saving it for the book. However, with the recent explosion in the cycling world I figured that no time is better than the present for presenting a brief... excerpt... of sorts from my future novel.

Correct, I am talking about Lance Armstrong. I pretty much turned away from the Armstrong adoration when I started getting serious about cycling. It was too common and too Fred-like to cheer for Armstrong. When he made his comeback to racing, I was more excited about the growth in crowds at the Tour Down Under rather than the fact that a "legend" was coming back to the sport. When his name got thrown under the bus by early accusations, I didn't rush to defend him to the masses or burn any posters. Finally, when ish really hit the fan and he was no longer a seven-time Tour De France winner, I didn't cry, didn't feel heartbroken and didn't get in any arguments with non-cycling fans at school. I just didn't want a part in it. However, when huge voodoo statues are erected then burned, when South Park has a Lance Armstrong episode, and when Lang Reynolds gets almost 50 retweets, I knew that my interest-silence had to be broken. There is no time like the present to uncover what really happened in the Lance Armstrong world of sports cheating. 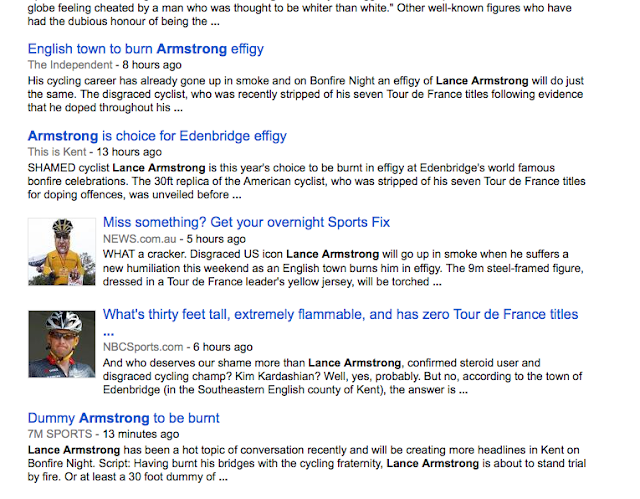 The Bracelet Affair: How Lance Armstrong REALLY beat doping tests, cheated the system, and won all those bike spandex races.

By: Ian CraneTweet
Posted by Ian Crane at 7:58 AM