Let's rewind a bit. I'll leave you hanging in suspense with the question in your mind on whether or not I survived the Sponsor Camp for the 2013 Hagens Berman Cycling team.

Last weekend was the meet and greet- mainly a good excuse to get to know our new teammates and director, but also a chance to learn about sponsors, expectations, and metaphorically pour one out for the homies who couldn't be there. 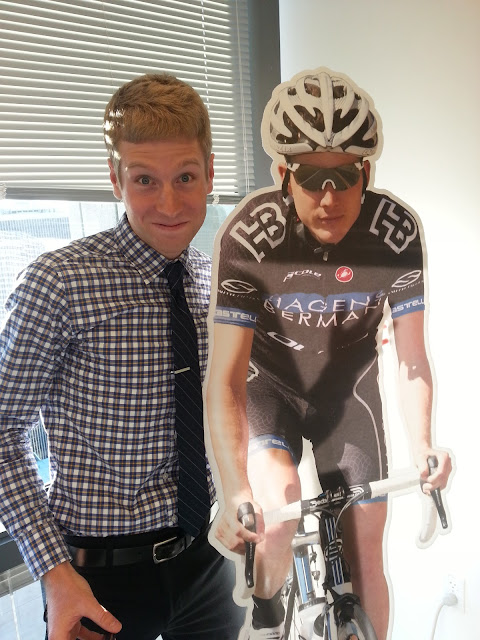 For those of you with memories like baby geniuses, Danny made a crash at Redmond Derby Days, broke his collar bone, and got surgery. Fast forward 6 months and the plate in his shoulder had to come out. This just HAD to happen last weekend, so instead of him actually being there, Alan created this cardboard cutout of him. Much fun was had. In other news, Steve has papercuts all over his body.

Friday afternoon came the time for 9 cyclists to step far, far away from their sweat pant wearing lifestyles to don some fancy clothes for dinner with the Don. In order to avoid last years parking lot changing fiasco, we all chose to wear nice clothing all day instead of just for dinner. This led to Winger running to the store rapidly to buy laces so he could look just like me. 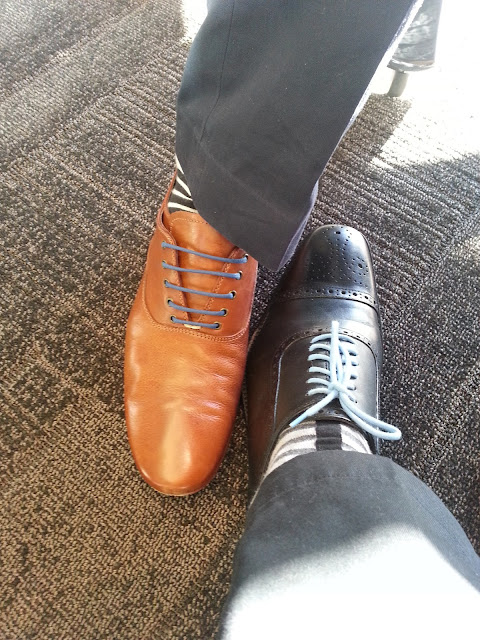 To avoid cocky statements about who was the best dressed, I'll instead focus on the fact that Cody brought two ties for a one tie sort of weekend. This is something that I have tremendous respect for, and although he only wore one, he was able to hook Stuart up with his extra tie. This is the beginning of a weekend filled with great teamwork and stylish dressing. Meanwhile, Jon "Horndogbrocal" Hornbeck didn't wear a tie. This led Steve Berman to call Jon out at dinner as being the "rebellious one of the group". In a non-related story, Alan sat next to Berman for a brief meal and he wasn't wearing a tie.

I found this picture of Alan at dinner. He slipped the bow-tie on after Berman left. 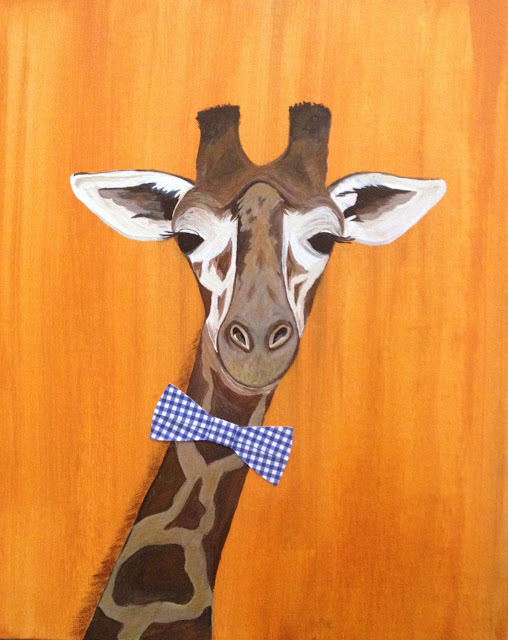 On the complete opposite side of the spectrum, here's a picture of one of my teammates in their fancy getup: 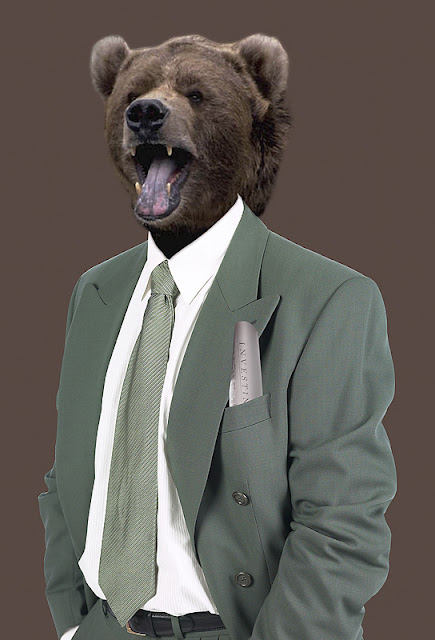 That's a picture of David just outside the restaurant. I bet most of you thought that I was going to follow up an "Alan is tall" joke with a "Steve is short" joke, but I flipped it on you. I wasn't going to belittle Steve with a small joke.

Enough about clothing. Friday was an opportunity to hear about:
We are all excited to have Burke Swindlehurst be our DS for the year. Here's an amazing fact about Burke- he has done the Cascade Cycling Classic and the Tour of the Gila more than fifteen times each! It is going to be very beneficial to our team to have someone with as much experience as he does. If you're wondering why we all made the split in a crosswind at Gila, it's because Burke knows about that one house in that one corner that blocks the wind at a 37 degree angle and makes it so you can move up easily before a windy area that always has a stiff 23 mph breeze coming from the NE.

Saturday morning took us to the new Gravitec warehouse. For those of you who don't know, Gravitec is a company who specializes in fall protection for workers whose job puts them at risk of falling from high places. People like window washers, construction workers, and Circ de Soleil acrobats all rely on Gravitec to educate them on how to be safe while working at heights and provide them with protection technology in the event of a fall.

The goal for Saturday was to put the riders in uncomfortable or unfamiliar situations where we would have to rely on our teammates and our communication skills in order to solve a task or to safely navigate an obstacle. A couple of my favorites from the day were:


Finally, the moment you've all been waiting for. My death or near-death experience (which one is it?!?!). At the end of the day we were given the chance to do the 15ft wall climb again. This time we were wearing our harnesses. The first time we failed miserably- we needed to get 10 guys up and over the wall in 3 minutes or less. We got 9 guys up in about 7 minutes. This second time around, we were supposed to get 12 guys over the wall in 3.5 minutes.

Instead of just David doing squats, I helped him carry the weight of the team. We held the team on our shoulders and would not budge. By doing two at a time, we were rapidly getting guys to the top and soon were left with just David and I at the ground level.

I did a wall sit and David climbed up my thighs, onto my shoulders and was grabbed by someone at the top. The ~10 guys at the top all pulled David up halfway so that he was held in limbo. Half his body dangled off the wall like some Rambo ice-climbing movie. I was able to just reach David's foot, so I grabbed that and began walking up the wall, Mission Impossible style. Soon I reached his harness and was able to climb up that until I was close to the top. Trouble- I had nowhere else to climb. As I dangled off of David, I saw Cody lean over the side and grab on to my shoulders. Since he's Canadian, and Canadians know a thing or two about lugging heavy objects, I just sort of assumed that I could let go of David. Unspoken teamwork. I released my monkey grip on David's harness and as the rest of the team pulled David up and over the wall, I hung 15 feet in the air, the only thing keeping me from the Felix Baumgartner freefall to the ground below was Cody. This is where I learned that Cody J Campbell has the upper body strength of 11 cyclists or at least 1.5 adult males. I expected to hang there until Cody got some help from the other guys, but instead he started pulling. Cody single-handily saved me from imminent sore ankles, good footage for @WingerStudios, and probably a different ending to my blog post.

Here are some more photos from Kyle Mutter and Winger Studios: 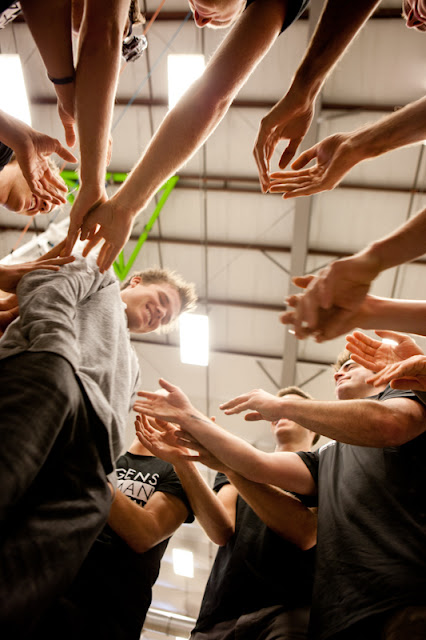 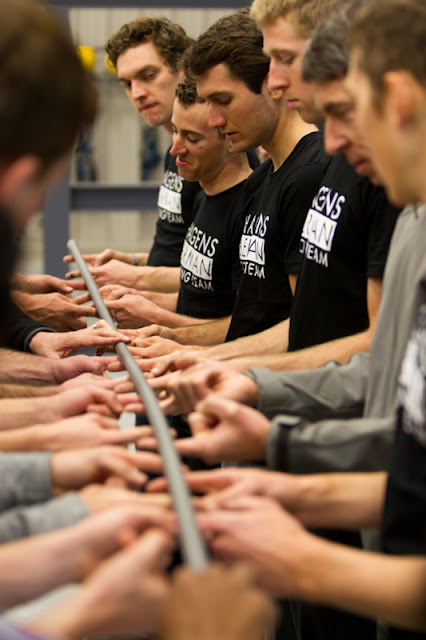 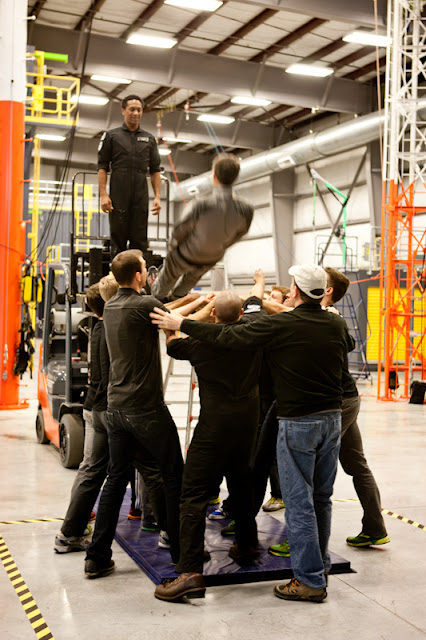 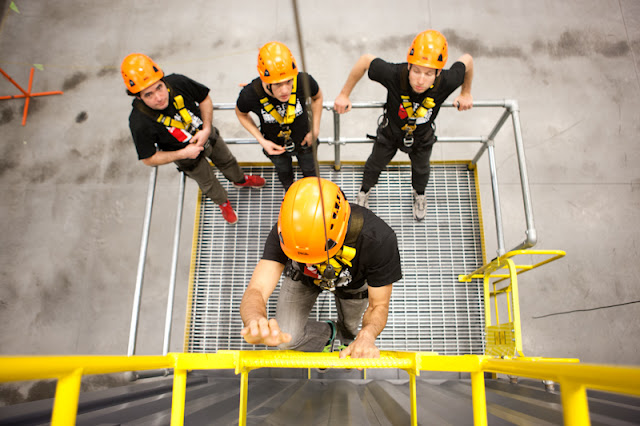 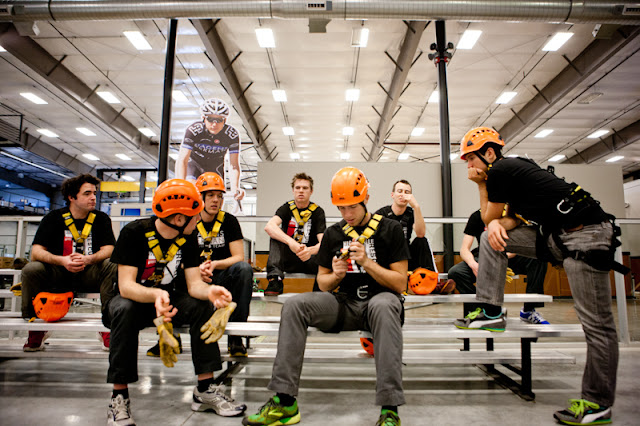 
Yes, this is a cycling team. Yes, these were not cycling-related activities. But if you take an athlete out of their comfort zone you introduce a new dimension to their interactions. Instead of facing problems that we've all seen before, we were forced to: communicate better, think outside of the box, use each others strengths and weaknesses, and rely on people that we just met.

How many of you would jump off a 40 foot structure with only 8 people ensuring that you didn't splatter on the ground? And of those 8 people controlling your fate, you've known half of them for less than a day?

Standing 40 feet in the air about to take that jump, I did not hesitate for a second. Thank you Gravitec for turning a group of strangers into a much closer team.

We are all excited to get out on bikes and try to drop each other. Sorry, I meant work well together. Tweet
Posted by Ian Crane at 9:06 AM