Walla squared is one of the bigger races in Washington. We went there and raced the bicycles. Racing happened, winning happened, losing happened, and snickers were eaten. Here is the weekends top 5-

5) Dogs
4) Hosts
3) Wind
Walla Walla is very exposed to wind. When it decides to get windy, it gets very windy-

Not this type of wind: 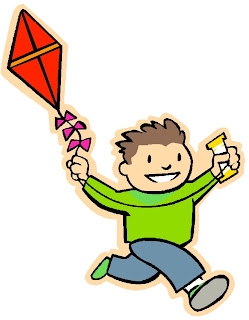 Holy hell Bill Paxton in Twister was this weekend windy. Saturdays crit was a vortex of wind that made tactics mentally confusing, and Sundays road race was equivalent to 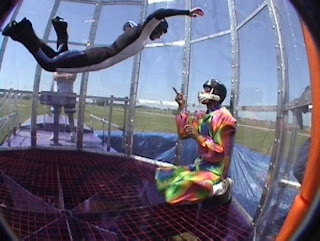 Approximately 10 miles into the 91 mile race things got ballistic on a cross-tailwind climb. After wrestling the bike on the preceding descent to stay upright, there were ~14 of us left in the front group. I had a moment with many terryifying thoughts of having to do 80 more miles in the wind, all out, with only 13 other guys to shelter from the wind, but luckily the race came back together somewhat. Here is a cool video I found from the race.
2.5) Crit
David, Steve and I made the other bike racers look silly in the first 1/2 lap of the crit. We clipped in and pedaled hard, and apparently the three of us were all quite giddy with the fact that we were far ahead of everybody so soon into the race.
2) Colin vs Ian showdown
The real race happened around 10th in the GC. Who cares about the top 9 spots, the most intriguing battle happened for the 10th and 11th spots. Colin and I finished in the same group in the first road race, then Colin smashed me in the time trial by a whopping 2.6 seconds. 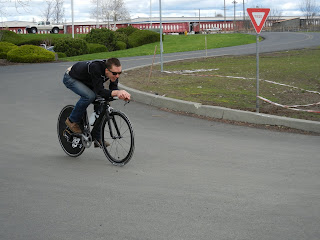 1) Sunday
Kennett says it the best. He was off the front all race, mostly alone. Then BOOM

"Shit was going down back in the field at this point, with Phil, Lang, Spencer, Chris, Ian, and Dan all going ape shit and attacking like spider monkeys with terribly itchy ticks.  They were going nuts.  I’m glad I was up the road riding easy threshold in the wind by myself, because the watts I would have had to do holding onto wheels and following the HB surges would have been much more painful. As I climbed the longer tailwind climb and the wheel and lead cars came around me (signifying my gap was under a minute) I began looking back in fear at the approaching field.  They were gaining time on me at an alarming rate.  Especially two riders in black.  Shit, they were going to catch me before the top of the climb!  I grimaced and sped up.  I looked back again, did a double take and realized the two riders with the large gap to the field were Dan and Chris, the very two riders we were trying to have bridge to me all freaking day.  And they were alone.  And this was the last lap!"
Venneth Peterson
Stomped. I finished up 8th gc. We had 5 guys in the top 12 on GC, a stage win, and the team GC.
Veni Vidi Vici.
Tweet
Posted by Ian Crane at 1:27 PM