Now Listen Up, Here's the Story

It’s on. This weekend I went on some no-BS bike pedal stomps with David and I set a couple Strava KOMS! Wow! My powertap is broken again, which is unfortunate, so I can only estimate and assume that we averaged 412 watts for the 5 hours we rode. Proof! 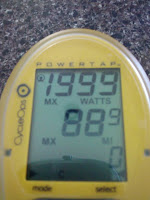 I hate that I just talked about power for even the minute (my-noot, duh) purpose of making a joke. I can’t stand it when people spit the power number game and brag about how their 20 minute power is actually 20 watts higher than their most recent test says because that day they had a sore throat and hadn’t gotten a full nine and a half hours of sleep and their kids were up all night with fevers and they wet the bed and they had a rough day at the office and there were only re-runs of Friends on so they couldn’t get properly motivated and the air was improperly oxygenated and they did a really hard workout a couple days before and they’ve had sore ribs for like, eight months.


As the hours on the bike go up, proportionally the excitement I get for the music on my ipod goes down. I love my shuffle, literally have lots of love for it. The kind of love you have for a puppy or Christmas trees. The problem is that previously I wasn’t taking advantage of the full carrying capacity of this AppleGem that IUse, so instead of having 300+ songs on it, I had approximately 94 that I really liked, at one point. But then you can only hear La La La by LMFAO so many times before your head explodes, so recently I set about revamping the playlist that I’ll listen to for the next couple of months.
First- this isn’t new for me to listen to but I can’t NOT have a couple songs by Macklemore on the playlist. Local Seattle music is better than anything else, did you know that? I like listening to Mack when I’m not riding also, but some of his stuff plays nicely in the ears and makes my cerebellum and ear canals and cerebral cortex tingle. Especially the medulla oblongata.


Next, I have a certain respect for the people that just do everything. Have you watched the TV show Community? Or laughed at the jokes on 30 Rock? Introducing Donald Glover- AKA Troy from Community AKA Childish Gambino- the most entertaining rapper ever. Like Lil Wayne, but actually good at rapping. This means he has really strong punchlines, entertaining lyrics, and doesn’t sound like a cat dying! Excellent.

So those are some of the stuff I already listened to and haven’t gotten close to being bored with it yet. But I needed some refreshing fast paced exciting music to ride to. I’ll be honest, I tried to convert myself into a Skrillex believer, but I just needed some more lyrics. Skrillex is great of course, but as an Opera singer myself I need something to wrap my mind around. Since I’m tone deaf, I like words. SOOOOOOOOOOOOOOOOOOOOOOOOOOOOOOOO I found the holy grail combination for bike riding.
What happens when you combine Dubstep with NWA? Or with Outkast? Or Dead Prez? You get gold. I’ve discovered the joys of remixed rap songs- the best of both worlds. Instead of average rap beats, you get crazy high paced make my heart rate 168bpm music, with catchy and intelligent rap lyrics like “everyday I’m hustling” and “where da hood at”.
And finally, for Chris Parrish: