What's With the Waving Situation?

Here's this conundrum that's worked its way through my mind for many of months. Is it still an alliteration if around every other algorithm of analysis of abbreviations is about the same? Not so sure how they work, and the other thing that I'm not so sure how it works is etiquette of the wave.

I don't mean the wave at baseball games. Everyone knows you only do that when your team is winning and on offense at the time, but realistically that never happens because there's that one drunk guy sitting in the upper deck in left field who decides that it needs to happen NOW. I mean the wave on two wheels. The one hand off the handlebars, gentle moving side-to-side motion to acknowledge someone else on two wheels with a set of handlebars.

There are three categories here:

Believe it or not,  I am educated in all three of the above aspects of the two-wheeled wave. Let me explain.

Motorpacing is the ish. I often ride behind the scooter to replicate racing, to get a speed workout, etc, etc, etcetera. (That is how I tried to spell out etc. Blogger tries to auto-correct that as "tetrameter", which most know as a line of verse consisting either of four dipodies or four metric feet). The problem with motorpacing is that this is not something that you can do alone. You need a friend to sit on that scooter and drive it. Here comes the ace of spades. In order to have someone drive for you, you often need to drive for THEM . This is where I get my scooter credibility.

Something that I've noticed while riding the scooter is the immense respect for motorized two-wheeled vehicles. I don't mean respect from other motorists in cars. What I mean is that OTHER motorized two-wheeled vehicles are very respectful of you. Regardless of the fact that our scooter maxes at out 36mph, I will always get a wave from my new potential friends- Harley or Vespa.


That's right folks, while driving the scooter I become instantly part of the Harley crew. I roll past and get a head nod or a wave. I roll through town in a PACK of Harleys who have moved to the side so I can ride next to them. Who would've thought that the most stereotypically meanest, grubbiest, leather jacket wearing, razor blade shunning, tattoo ink using, ape hanger bar cruising people in the world would acknowledge me, the guy on a scooter with some bike rider in spandex following close behind? 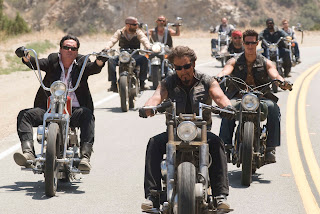 Acknowledging me on the scooter- Finally, I went on a ride today and saw at least 17 bicycle riders. I waved to every single one of them. I got a total of 1/2 a wave back. I call this half a wave because I'm fairly certain the person was just blowing their nose, but it was an arm movement soooooo.

I don't get it. Why do these guys wave? 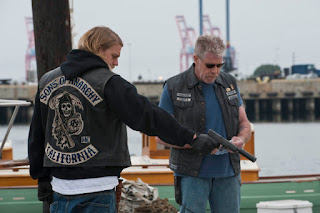 Help me with this one Seattle.Tweet
Posted by Ian Crane at 5:15 PM