Hey Ian, Where Have You Been?

I've been everywhere man JUST KIDDING this is not the time or the place to begin singing. I know everyone has their guilty pleasures. Most people choose to participate with these guilty pleasures... guiltily: whether it's doing karaoke to Donna Summer in your bedroom with the blinds shut while wearing a green and silver sequined shirt or silently watching Keeping Up With the Kardashians and being SO excited, these are things that most people tend to hide. Not me however.

I started with some lyrics. Most may assume - "OH, Johnny Cash, chill bro". Unfortunately now when I think of those lyrics I think of my Caribbean sister Rihanna. This is in no way an insult towards the great Man in Black, but guilty pleasures are guilty pleasures. Continuing with the woman vocalist theme, I bought the Lana Del Rey CD Born to Die for $1 at Best Buy. This set all sorts of current records for me: cheapest CD ever purchased, first pop CD purchased since cutting off my mullet, and first actual real-life CD purchased in, not to exaggerate, 18 years.

This has nothing to do with no blogging though. Most of my guilty pleasures involve blogging, so I'm S.O.L on that excuse line. Time for me to start blaming other people.

Starting last Friday, I did something absolutely absurd. I raced track bike-cycles. I'm an August velodrome person- I wait until everyone else has had three months of practice and then I begin to re-teach myself about not coasting while racing. I have a small confession to make. My track tactics are terrible. Really dreadful. Which means instead of trying to make these better, I just attack a lot and hope that by attacking I can somehow convince the race to feel more like a 95 mile road race with climbs rather than a 7 minute v02 interval.  Guilty! Last Friday was a pretty direct representation of this: scratch race, make it into breakaway, drive breakaway, get last out of breakaway. 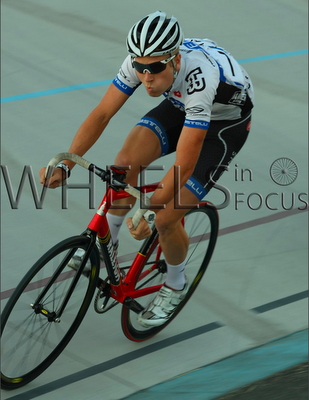 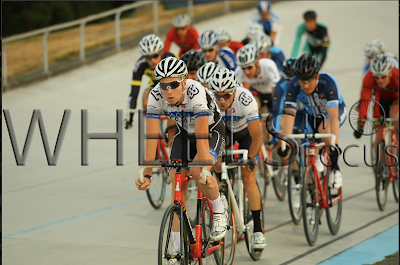 Then MADISON! Marymoor heard I was coming so they gave me a hand-holding race. I have certain rules about holding hands with teenagers, but Joe gave consent, so Logan and I took off on our adventure. This involved no tactics whatsoever except attacking the very second we got thrown in, every time. 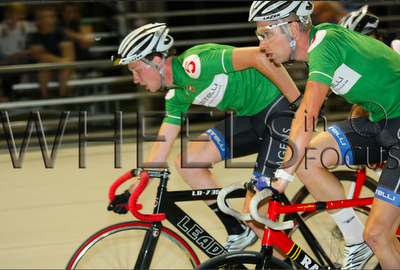 To celebrate our win, Logan tried to find eligible bacheloresses in the crowd. I stayed nearby to check IDs of any ladies enthralled by the diamond earrings and Spanish-climber necklace. 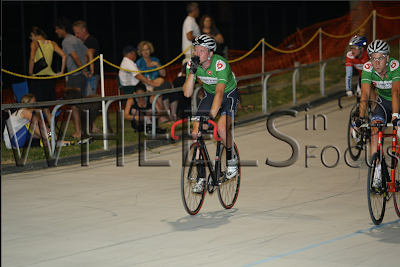 Ok, that's the update on last Friday. Moving forward. Thursday marked the day where I became an adult. It was actually a more important day for my good friends Jesse and Grant because it was their wedding day, but to make this more about me (the wedding was really all about me), this also marks the first of my friends to be getting married. This means that I am now an adult. I got to be a groomsman for Grant which mainly involved keeping the paparazzi away. He is track #1 you know. This was quite the excellent day, and also was a personal record for me of 14 hours straight of on my feet moving. Not even a break to blog, nap, get a massage, or imagine doing normal things! That's right, Thursday marked my day of being a normal human and not a serious bike racer bum. I wore a shirt that had to be tucked in to pants that had creases, I wore shiny shoes that hurt my feet, suspenders, a vest, a tie, little wrist jewels, swanky watch, etc etc etc etc. 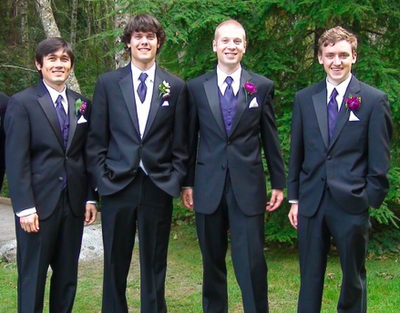 The ceremony was good fun, but the reception was ooooh even better fun. Great music, lots of energized people, and I was willing to break it down. Eggo from Rideitlikeyoustoleit was there filming, and here's some of his footage of Marissa and I dancing:

This brings us almost up to speed. Having thrown myself into the track racing fire, I decided I might as well try my hand again at fixie pedaling. Again, tactics were not part of this equation. This included!!!!

Another elimination to scratch? Sad. This time, I did the I CAN'T GET TO THE FRONT problem which meant I played the devil for almost 20 laps. Then, in a moment of accidental tactics, I played the WRONG tactic and all of a sudden was out, before the scratch race even started. Benny made sure to remind me that he has made it to the final of every miss-n-out/elimination/elimination to scratch since he was like, 16. While I watched the last 12ish laps of this bike festival, I chuckled to myself as everyone went harder than I had. I think that this may have been an accidental tactic.

Why was this an accidental tactic? The last race of the night was a 40 lap scratch race (that's right, 3 scratch races in one night. hmmm) and given the brisk-ness of our first two races, I knew that this one would be generally rapid. I attacked on many of occasions, and finally got the elastic to snap with maybe 18 laps to go and got away with two other riders. We got 1/2 lap up, became just myself and one other, and then we drilled it for the remainder of the race. The ending of the race involved me doing a 400 meter long sprint because I forgot about #tactics on Marymoor. The good news about this is that I had a monster gear on the bike, so by the time I actually got it up to a high cadence I only had 100 meters to go and was able to take the win. Let's look at some facial highlights:

I was going very hard and was quite thirsty. What I didn't realize is that I may have had a face-stroke because it appears that I had no control over the lower half of my jaw region. This however does not compare to the intimidating sneer that THE Joe Holmes had back in the pack. Instead of covering attacks, he just had to look at people and that killed any moves. I may have won the last race, but Joe wins the face competition. 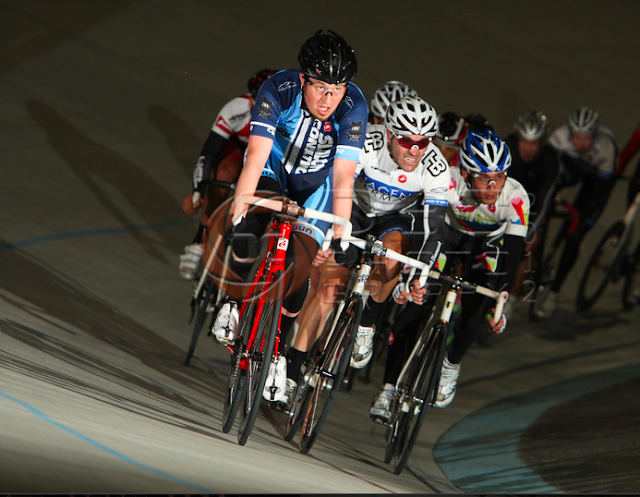 So after two weeks of careful note taking and analysis of advanced track racing tactics, I've determined that when using them I lose miss-n-outs and when I race like I don't understand what's happening I have more pain in my legs region the next day.

This means I attack next Friday.