This is interesting to me, part 2

I’ve been watching a lot of cinematic explosions lately. This confirms a fear of mine: that I am not a “cool guy”. Simply put, cool guys don’t look at explosions. They turn their backs and they walk away. And walk away in slow motion. With diamond covered boots. Or something like that. TM

Again, I was misleading with the text that I am creating on my backpack robot. I made it sound like I was watching explosions within the cinema, but that hasn’t necessarily been the case. I also was writing from memory some of the lines from the song “Cool Guys Don’t Look at Explosions” by Josh Groban.

I know what you’re thinking, and I want to ease your mind. I can be trusted because I HAVE been watching movies and television. They were symbolic explosions for two reasons. Ok, three reasons: 1) The movies I was watching were terrible 2) They were mind-blowingly good 3) There were actual explosions in them.

The benefit to flying on airplanes again is that it gives me time to do my best thinking. So far this post has been far from my best thinking and instead is about 200 words of mindless rambling. Actually, that kind of reminds me of how I survived some classes in College. I did this by continuing to demonstrate my point while evaluating the responses of the studies that portrayed no significance, relevance, importance, implications, meaning, weight, consequence, value, or magnitude to the thesis at hand. As you can see, this is still not my best thinking- but I already have 260 words written- who’s the real winner now? You are.

OK, back to movies and TV. Craneimal faithfuls may remember a certain post I did where my mind exploded when I saw Andy Dwyer from Parks and Recreation be one of the heroes in the film Zero Dark Thirty. The contrast was hilarious to me and I quickly thought of several more examples of actors or actresses that stepped out of a known role and into something completely different.

Let’s look at some more!

Andy Samberg- Known for SNL and The Lonely Island music group, Andy Samberg is a comedic and often times sophomoric actor. Never fear with Andy, for a fart joke is near. In fact, the song mentioned at the beginning is an Andy Samberg special! Then I was watching a heartbreaking movie with excellent acting and lots of drama, and Andy Samberg played one of the main characters. In Celeste and Jesse Forever, Andy plays Jesse, a victim of heartbreak. It’s actually super depressing and dark at times. There are few fart jokes. I was confused. He’s actually a very good actor, so you should watch it.

Steve Carell- Oh, The Office! That’s funny, right? Or the one where he’s suicidal and runs behind a VW bus a lot? (you know the movie, I can’t remember the title and I’m on a plane and the internet is $8.99 and they won’t accept Jelly Beans that Steve gave me as payment) Well that movie is still a comedy. Once a goofy actor, always a goofy actor, right? WRONG. If you want to see Steve Carell as a verbally abusive and cheating “father figure” you should watch The Way Way Back. This film was actually delightful and despite Steve being a bit of a meany, I highly recommend it.

Ron Swanson- OK, that’s not his actor’s name, but if I say Ron Swanson you know whom I am talking about. Nick Offerman has portrayed the mustachio’ed manly man who runs the office on Parks and Recreation and eats all the bacon and eggs.  Let’s flip away from TV and into a starring role as the father who isn’t really there for the main character in The Kings of Summer. Watch it. There aren’t any anti-government or breakfast food jokes, but Ron Swa, sorry, Nick Offerman plays a very convincing mean guy.

Every once in awhile I like to step out of my normal movie interests and immerse myself in a different type of cinema-culture. To translate, sometimes we watch movies that Marissa chooses as well. I am proud to admit it that I have seen Love Actually several times and find it quite enjoyable. You may think that I am going in the direction of Liam Neeson playing the wonderful father in that film and the violent hero in the Taken movies, but I’m not going to focus on that. There is another contrast that is MARVELOUS. Maybe it’s because I don’t normally watch Romance Dramas. When I see actors in those films I instantly think of their other portrayals. That’s my curse, I guess. The best character in Love Actually is Mark, a love-struck dude stuck in the friendzone with his best friends wife. Classic. He is so hopelessly in love with her and there is nothing he can do about it! It’s a true Beauty and the Beast story. Andrew Lincoln builds up his courage and confesses his love in the moment shown below, and everyone smiles.

Then, because she’s already married, he’s punished by getting sent into an almost apocalyptic world overtaken by zombies in The Walking Dead. 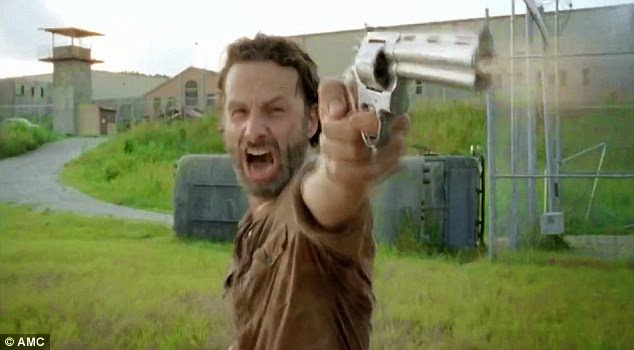 Sherriff Rick has a tough go at it and he is constantly reminded that he shouldn’t have gone for Keira Knightley- because much like Orlando Bloom in The Pirates of the Caribbean, she already had plans. Tease. This comparison allows us to analyze Johnny Depp, a pirate in that film. Johnny captains ships, which is a similar role to being a driver. Jason Statham was a getaway driver in the Transporter movies. Jason Statham and cars connect with the new Fast and the Furious movie (that I’m sure will be amazing) and that film stars Dwayne Johnson. Dwayne also acted in Snitch, where he worked in an office like Steve Carell. Working under Steve at Dundler Mifflin was John Krasinski: a man who battled Matt Damon for a City Government position in the movie Promised Land. City Government brings us back to Ron Swanson, who acts along side Amy Poehler, an important part of SNL. With that irrefutable sequence of connections, you can now assume that Andy Samberg will be the next hero in this season of the Walking Dead.