After a whirlwind two-day return to Seattle, I am back on the plane and heading South-east towards Alabama and two weeks of crit racing: Sunny King and Charlotte.

It’s easy in this profession to always be moving forward- always focusing upon the next race or the next trip. Often times experiences or moments get left in the past, simply a hazy memory in our relentless journey towards... something. I think that’s one of the reasons bike racing, as well as bike racers, as a whole exists. We have short-term memories: often choosing to forget the pain each race brings, the shuffle of travel on our daily lives, and the really bad moments. You always remember the good moments simply as a snapshot and the bad moments as something to build upon. What happens to the details? One of the reasons that I started this blog was to have an excuse to do something involving funny pictures. Another reason was I wanted to have a record of all the experiences that I get the pleasure of having while doing this racing thing.

San Dimas Stage Race was a late addition to my calendar, and one that I was very excited about having the chance to do again. After throwing up/away my Tucson Bicycle Classic, I was ready for an early-season stage race to get a chance to help the team in any way I could.

Friday morning started off with me spending money, which seems to be quite standard for life on the road. We didn’t race till later that afternoon, and I needed coffee. Again, this is something quite standard for my life. However, the Motel 6 had no means for boiling water, so Carson and I purchased a $20 kettle at Target, effectively turning our room into AeroPress party central. After somewhere between 3 and 18 AeroPresses, we rode to the race. Then we went right past the race and headed for an hour-long spin. I schemed heavily here: things like pacing tactics, last minute weight loss methods, and which flavor drink mix would best bring out my crazy. I settled for lemonade flavor, and got about my warmup.

For those who haven’t done the TT up Glendora Mt Rd, it starts off with about a minute and a half of false-flat heading into the first corner, and with that the first pitches of the climb. The overall effort is 4.25 miles, or if you want to make your race seem longer, some amount larger than that in Km’s. The first 90 seconds are the only time above 20mph all race.

Time trial reports are boring. I rode hard, was happy with how I paced it, and finished feeling like this: 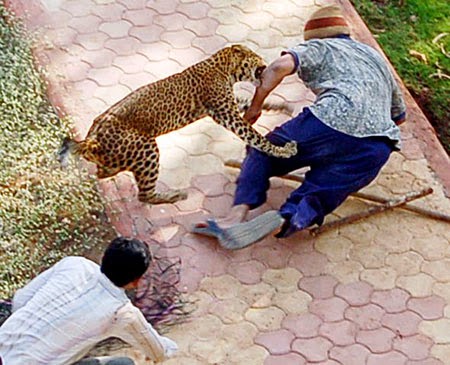 You can choose which one I was, because truthfully I felt a bit like both.

Results came in and I was very pleased to finish 6th on the stage. This was my best result in a time trial at this level and I was content, for many reasons. I’ve put in a lot of work this winter on the time trial bike, so I knew I had the practice at sustained efforts for an extended amount of time. However, this wasn’t really a time trial as much as it was a hillclimb. I was on a road bike, not a time trial machine. Sure they are different styles of races, but in the end it is still a matter of focus, brain disease, and desire. Our team stacked the top 6, with Gregory in 2nd by a second and Daniel not far behind in 4th.

Then, something amazing happened. We went to Olive Garden for dinner.

Besides that, there was an earthquake. My favorite part of this earthquake was when every questionable character outside smoking at the Motel 6 became an expert on natural occurrences like these- trying to make conversations about the epicenter and wavelength frequencies.

The earthquake caused some concerns for our road race course, as the loop circles a large dam.  Our start was delayed, and our race shortened as a result. Luckily, the dam didn’t break because I don’t like swimming that much. 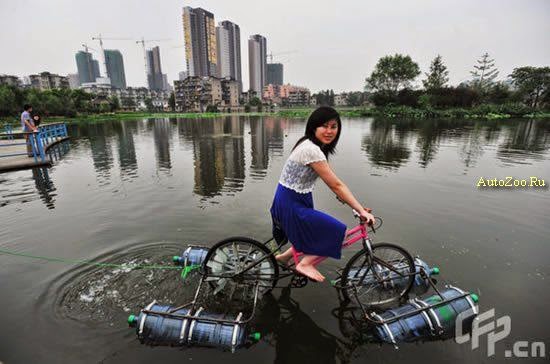 Luis got up the road in the breakaway, taking the lead in the KOM and Sprint jersey competitions. Myself, Gregory and Daniel all tried our hand at following moves across to the break, but had no success. I finished comfortably in the front group (for the first time at SDSR), but the break had stayed away. It was an unfavorable move for us, and as a result we all lost several spots in the GC.

Going into the crit, we had Luis in 4th, Gregory in 8th, Daniel in 9th, and myself in 12th on the GC. We had two goals: 1) protect Luis’ lead in the sprint competition 2) be active with Greg, Daniel and myself, forcing a difficult race which would hopefully allow Luis to get away in the final moments gaining precious GC seconds.

Both Carson and I wore a long sleeve skinsuit, which means we meant business. Also hilarious, it was warm out and pretty much the only people wearing long sleeves in the race were Carson and myself- the two dudes from Seattle who in theory should have been way warmer than anyone.

Also, Tela came to watch me, and since she doesn’t get to see me race much anymore I knew it was important to not suck.

For the two intermediate sprints (60 min to go and 30 min to go), we had to make sure that either Luis won or one of us scored points to keep the closest threat from moving into first in the competition. I was in great position for the first sprint and won it- taking the 15 points and a 3 second time bonus. The second sprint came soon enough, and I found myself second wheel with Luis behind me. I started my sprint with 800 m to go, cornered hard, and dug to the line. Luis stayed on my wheel, letting me win the sprint while still securing points for himself.  With the sprint competition locked up, it was time to start thinking about the finish.

Luis towed me around, providing by far the smoothest last five laps of any crit that I’ve done at this level. I lost his wheel with one to go, made a big surge to get it back, and went into the final corner 5th wheel. This is also where I finished, which makes it my best crit result at this level since 2011. 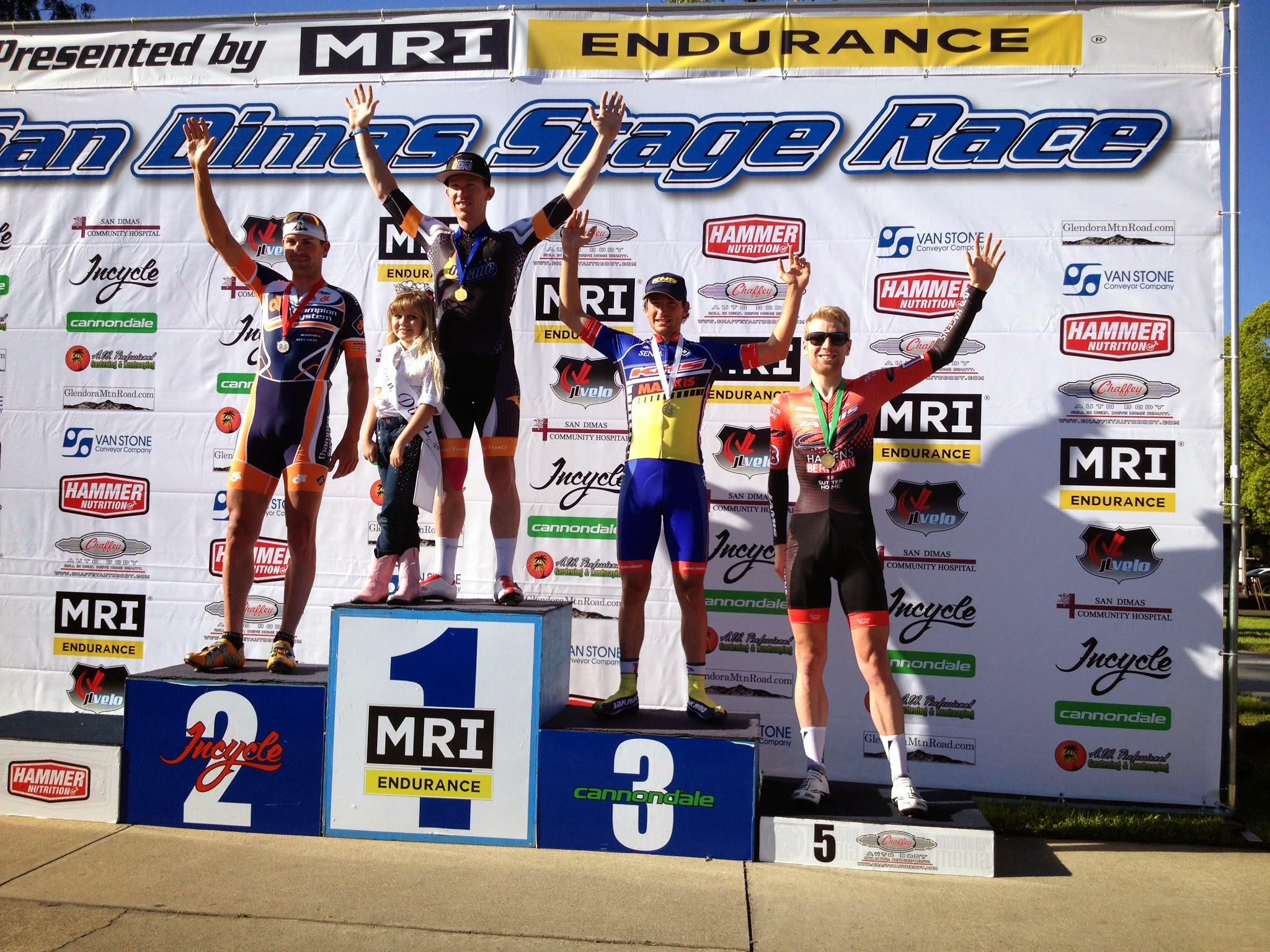 The time bonuses from the intermediate sprints moved me back up to tenth overall (take that Kennett!) and into second in the green jersey competition. I was happy with how I rode, but also needed to keep the weekend in perspective.

This is my job. Our team’s job is to win races. We didn’t win any of the stages, so although my personal results were strong for where I’ve been in the past, there is still room to progress. Because of that, I am happier with winning the intermediate sprints than I am with the 5th in the race. I did a job that helped the team achieve an objective, and as I continue to develop in my first season as a professional, I need to continue to do what I can to help my team and teammates achieve their goals.
San Dimas was a good momentum and confidence builder for myself and I plan on growing as a rider with every opportunity I have to race.

This post was long, sorry. There also weren’t any jokes, and most people probably didn’t read this far. That’s fine though, because this weekend is something that I want to have record of. I was able to look back at my first trip to San Dimas in 2011, and I plan on looking back on this post when I win San Dimas in the future.

Reflection over, NOW I can start thinking about the next races.