I was writing way too much for this to be one post, so I'll break it into two.


First of all, thank you everyone so much for your kind words and support over the last couple days. The messages are very much appreciated, and although I can’t respond to all of them, note that they provided quite a bit of motivation throughout the weekend. Knowing that people support and have your back makes the extra-tough efforts that much easier to commit to.

Going into this weekend, Marissa asked me what my goals were. Joe Martin Stage Race is a race that that suits me well, that I enjoy competing in, and that I had what I considered lofty aspirations for. My main goal was the Stage One time trial- this was a stage that had been firmly planted in my mind since I rode to 6th in the opening stage hill climb of San Dimas. The month of April was a singular focus towards one hill climb: from my training to my diet and everything in between, I thought about the JMSR TT daily. I considered top 10 to be an approachable target, with top 5 being my loftiest secret goal. I trained through Walla Walla, which was an important checkpoint of my form. I headed to Arkansas ready to let loose.

Never in my wildest dreams did I imagine that I would win.

The JMSR tt course is 2.5 miles and mostly uphill. There is about 30 seconds above 30mph out of the start house till you take a corner and begin your trek uphill. It is a fairly steady grade for the entire climb, with one “flat” pitch with about a K and a half to go. I had done my research on the course, both technically and physically. I rode the hill three times before my race, and had spent an hour the night before comparing various race efforts on Strava. Then I decided that I was thinking too much and thinking was going to confuse me, so I threw everything out the window and went as hard as I could. 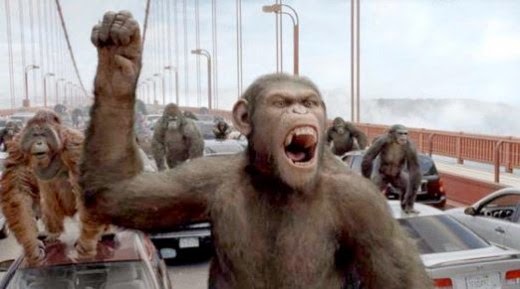 I rolled back to our tent after an effort I was pleased with. The last rider finished, Seba checked doping control, and saw that I was one of the three chosen to be tested. I still didn’t know what place I got! Then, my USADA chaperone came and handed me some paperwork to sign. This paperwork said “1st Place Male”. 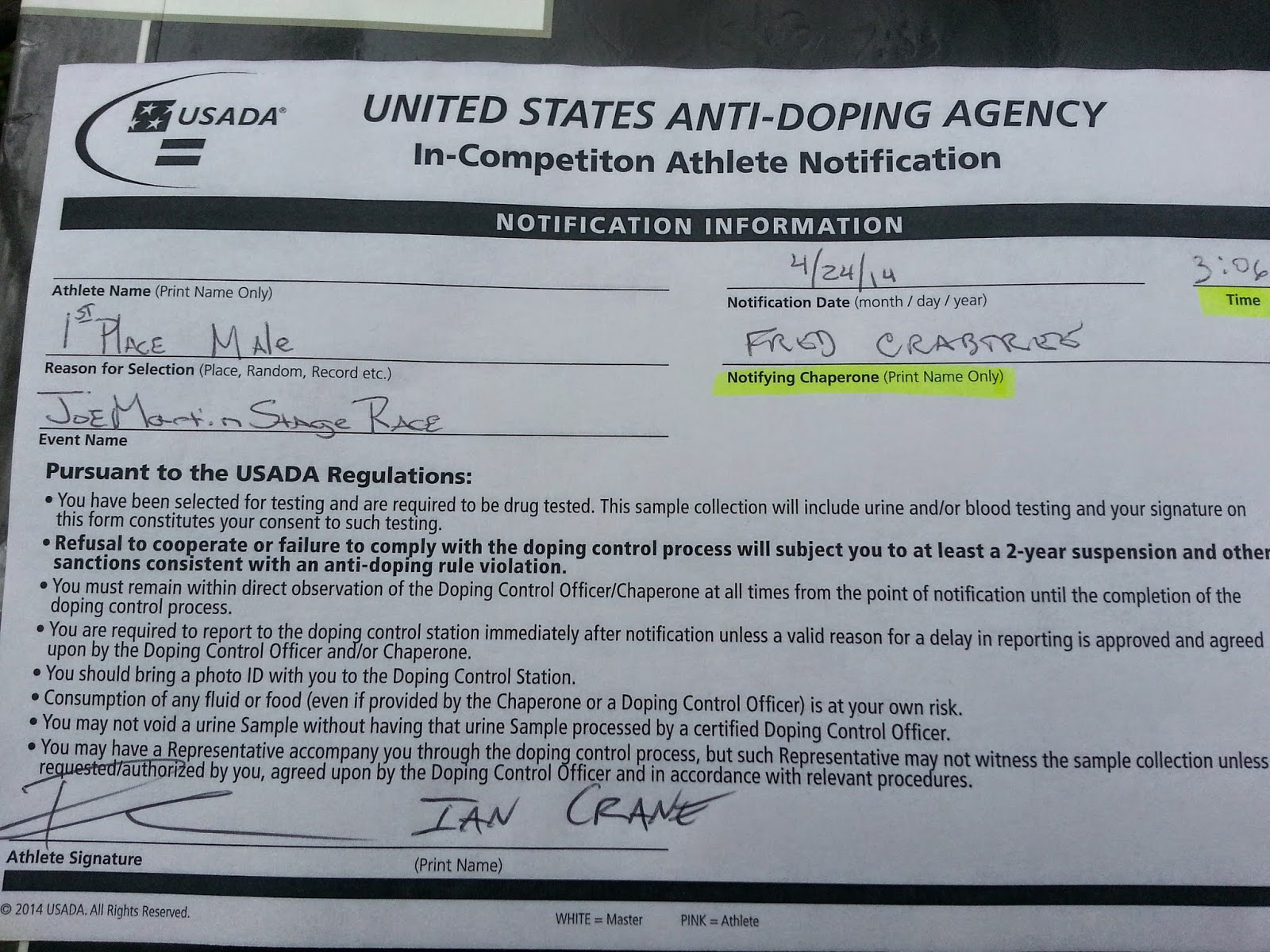 A lot of firsts! This was my first NRC riding for Jamis HB, my first professional win, my first leader’s jersey at a professional race, and my first time ever being tested by USADA. And so began my whirlwind of a weekend filled with learning experiences.

Stage two is a somewhat straightforward stage. 110 mostly rolling miles with a half-an-hour climb starting at about the 75-mile marker. Since we had only raced for 8 minutes so far, pretty much everyone was a GC threat. This is where Ben Jacques-Maynes and JJ Haedo come into play. They were to call the shots on the road: who was allowed in the breakaway, how fast the team would ride on the front, and when we would catch the break. Heck, Ben even told me when I should stop to pee! I can’t express enough how great it was to have riders with such experience calling the shots on the road and making my time in the leader’s jersey as stress free as possible. After a brisk 30ish K, the break finally was established to our liking and we let the gap grow. Then Guido, Ruben and Stephen got on the front and started rotating. Soon Carson was riding as well, and not long after Eloy hit the wind. I sat behind JJ and in front of Ben for 3 hours: completely sheltered from the wind and from any sort of fighting within the peleton.

At the base of the big climb the guys had brought the break to within a minute, and that gap soon dissolved as the attacks started from the main bunch. Smart Stop were being notably aggressive, with strong digs by Kenda and Optum as well. Soon it was just Carson, Ben and myself left to cover the moves, and we crested the climb with the remnants of the peleton all together. The last 30 miles of the race are all downhill, and we covered them in less than an hour. I was very excited to see Stephen and JJ muscle their way back to the front of the group, and again it was Carson, Stephen and Ben powering away on the front.

The last 2k of this course are wild. You go from a 6 lane wide highway into a sharp left-right chicane on narrow roads directly followed by short/punchy rollers. Positioning is key- too far back into the first corner and you will never see the front. Too far forward and you will fade/get swarmed on the rollers in the last K. The finish stretch is 350 meters of very uphill terrain, and it is common for time gaps to occur in the closing meters. In order to protect me against these time gaps, our finish plan was for me to fight like hell for JJ’s wheel in the closing kilometers, because JJ “will be in the right place”. Sure enough, after a bit of battling, I went into the critical corner on JJ’s wheel and in about 8th place. Perfect! JJ jumped with about 300 m to go, I stayed on the wheel, and we were able to go 1-2 on the stage. This was an ideal ending for the guys who slayed themselves on the front all stage. 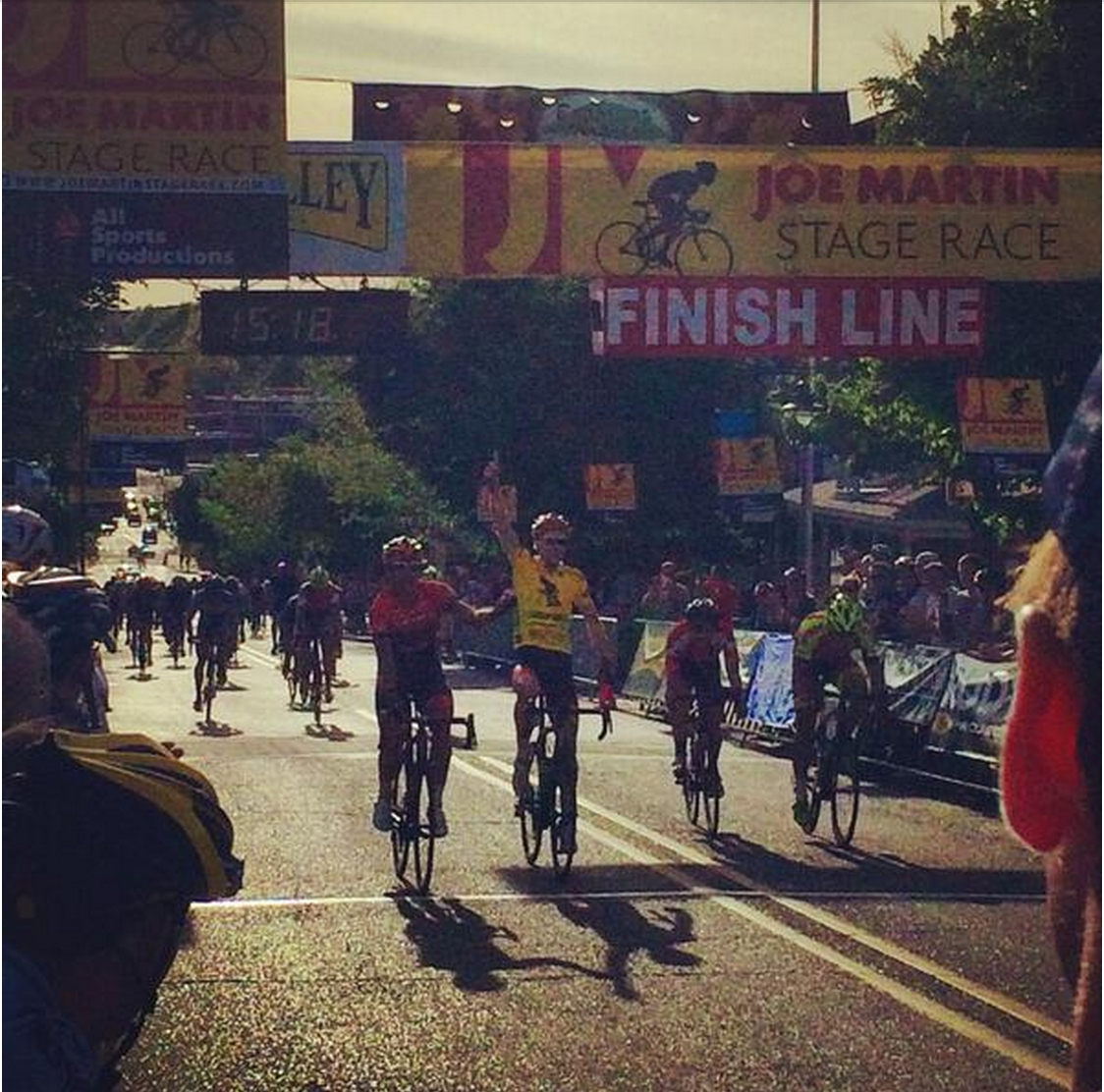 2nd on the stage gave me a six second time bonus (plus a 2 second time gap after the fourth place person on the stage), so I went into Saturday’s road race with a slightly more comfortable 11 second margin. 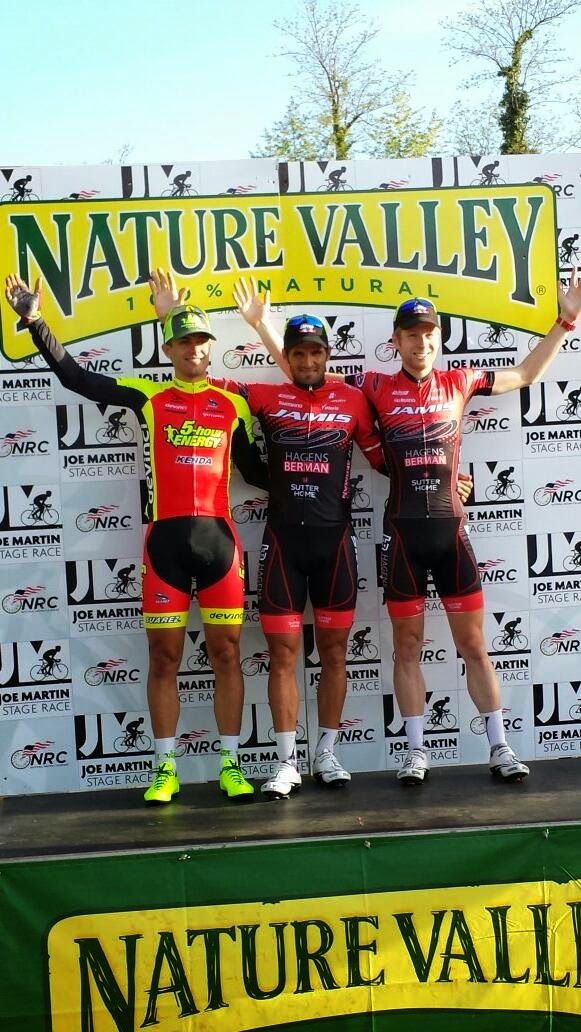 Also, I'm only using photos from the race taken from Twitter or taken by myself or my team. No screenshots. There were some amazing photographers at the race, and I bought the rights to those photos. I'll use those photos at some point.

Our Guest Director, Ed Beamon, took the photo of the gorilla.

Tomorrow I'll post the rest of the weekend. To ruin the ending: 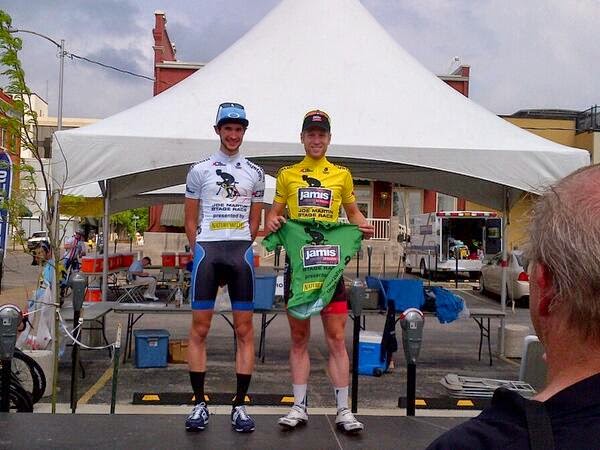