Tour of Walla Walla is a race that I’ve wanted to win for some time now. Last year I won two stages, but the overall eluded me by a second. The general goal of this weekend was to avoid losing by pedaling harder than the competition. This tactic seemed to work out, so I will take that mentality into my future races.

Carson and I loaded up my car and headed into a strange and foreign world. This world was a stage race without any sort of…adult supervision… to say the least. I don’t remember the last time I raced a stage race without Alan, or more recently Seba, looking after my needs and taking care of everything but the racing part of the weekend. Who would navigate to the races? What happens when I get thirsty? What do I do in the event of inclement weather??

Luckily for me I had rap music, burritos and Doug Sumi to make my world feel more stable, so I set about the bike racing part.

We arrived in Walla Walla early on Thursday, and went for a tremendously damp pre-race ride on the TT course. Carson had neglected to wash his bike before we left, so he was acting a bit more smug than I was on my freshly cleaned TT bike. After a rough hour, we decided that we were more than done with the bike drowning. Then, we headed to Allegro Cyclery to talk about Jamis Bikes and scary things like mountain bike trails. I am not feeling very creative this morning so I’m sorry this isn’t exciting yet. Then, there was a massive car chase through the streets of Walla Walla! Chunk from the Goonies had stolen an ice cream truck (crazy guy!) and was driving erratically while shooting a squirt gun out the window. Then Hulk Hogan and the entire cast of American Gladiator created a human roadblock in order to stop Chunk and his crazy goals. They succeeded! 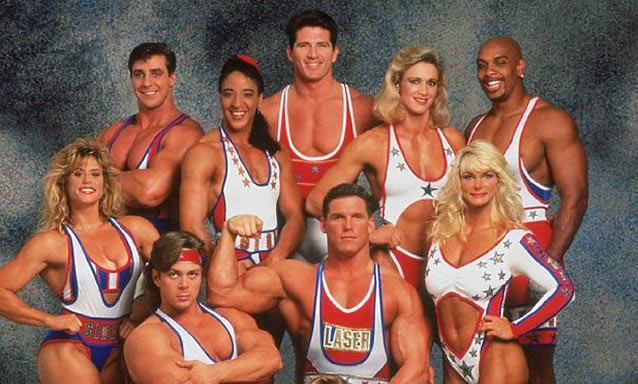 Friday morning we went for another ride. Then we went to the bike race, where we staged twice, were delayed twice, and then eventually cancelled. The stage had a section of road on a highway, and highways require Certified Flaggers. The flaggers didn’t show up due to some confusion, so we couldn’t race. There was a lot of grumbling about this, but I think all those who were cranky were forgetting a pretty basic piece of information: that it is MUCH better to not race than it is to get HIT BY A TRUCK!

The stage cancellation allowed me to scheme even harder for the Saturday morning TT. We arrived at the course early, since Carson was one of the first starters and I was one of the last, and set about our routines. Carson’s involved riding for about six minutes and realizing he was warmed up, whereas mine consisted of about 40 minutes of riding before I began to feel like an athlete again. The course is 8.something miles, and gradually climbs for the first 6ish minutes before kicking up for 3 minutes, and then descending all the way to the line. At 38mph. I knew it was important to get to the top of the climb quick, so I made sure and crush the beginning extra hard. In hindsight, I went out too hard and struggled in the second half of the race. As usual with TT’s, I was completely destroyed after, and was pleasantly surprised to see that I had won by 12 seconds. In more great news, Carson had ridden into the top 10 as well, giving us a good card to play in Sunday’s road race.

Saturday afternoon brought terrible wind, dark clouds, and pinning my first yellow jersey. I’ve been in the GC lead in one other stage race, but there wasn’t a race leaders jersey. The weather held off, and we didn’t have a rainy crit- this is always pleasant when you’re trying to stay safe and conserve energy.
The crit was averagely frightening. It was also only 55 minutes, which is quite a bit shorter than the 90+ minute NCC’s that I’d been doing the last couple of weekends, so all of a sudden it was game time. I found myself too far back on the last lap after overcorrecting to get past a crash, and came into the second-to-last corner about 20th wheel. I knew that the race really ended as you came out of the last corner, as the tailwind finish stretch didn’t allow much passing.  When the door opened on the second-to-last straightaway I jumped as hard as I could up the inside, and had a clear run to the corner. Unfortunately for me, Dave Richter jumped about one second too early and although my full head of steam got me past everyone else, Dave won the race to the last corner and that’s how we finished. Second in the crit got me 6 more seconds of time, which put me 15 seconds in the lead going into Sunday’s road race.

I really enjoy the road race course that we get to do to end the weekend. It's lumpy, windy, and just an overall hard day in the saddle whether you are riding off the front, in the group, or off the back.

You could argue that this is an easy race to control. I'd say no, but the countless hills are tempting for attacks, so much of the second half of the race we spent chasing attacks immediately instead of turning it over for K's at a time on the front. OK, I lied. I followed the dangerous attacks on the hills and Carson had a really hard day of tempo- keeping the four-man breakaway within a minute and a half all day. Although there were no *immediate* threats to the GC lead in the breakaway, almost everyone is a threat when you've only raced for a total of an hour and ten minutes.

On that second-to-last climb at about the 78 mile mark, Jacob Rathe from Jelly Belly attacked hard. He wasn't one of the closest guys on GC, but we still hadn't caught the breakaway and I was getting a bit ancy. I followed Jacob and 3rd on GC over the top of the climb, hoping that me being active would urge some chasing from the other teams in the race, most who had been sitting on contently for the last 70 miles.

Jacob kept the pressure on for several minutes, and I pulled through with some motivation. Soon, our group of 8 was rolling well-enough together, and we began to distance the field. We caught the breakaway at the base of the last climb, and now all I had to do to win GC was make sure that we all finished together.

This would be no easy task, however. I temporarily thought it was going to be as we all rotated evenly heading down the final descent. Thoughts of "maybe I'll have a go at the stage win" were ever-present in my head. Then, as they should've, people started to attack our group. Everyone seemed pretty content to let me chase, as they should've, so I did. After around 7 attacks, it was finally time to sprint. Here I did my best to not get a time gap in the last 200 meters, because my legs got extremely angry at me when I stood up to accelerate an 8th time.

I didn't lose time, and I won the GC!

The race continued after the stage. I attacked Benny, Carson, and Colin on the ride back to the parking lot. Then got dressed fast, raced from Waitsburg back to host housing, showered, packed, and left in 20 minutes, then met Doug at Taqueria Yungapetis. This is Alan Schmitz's favorite burrito place in Walla Walla, so we both sent him photos of us eating burritos. He was angry. 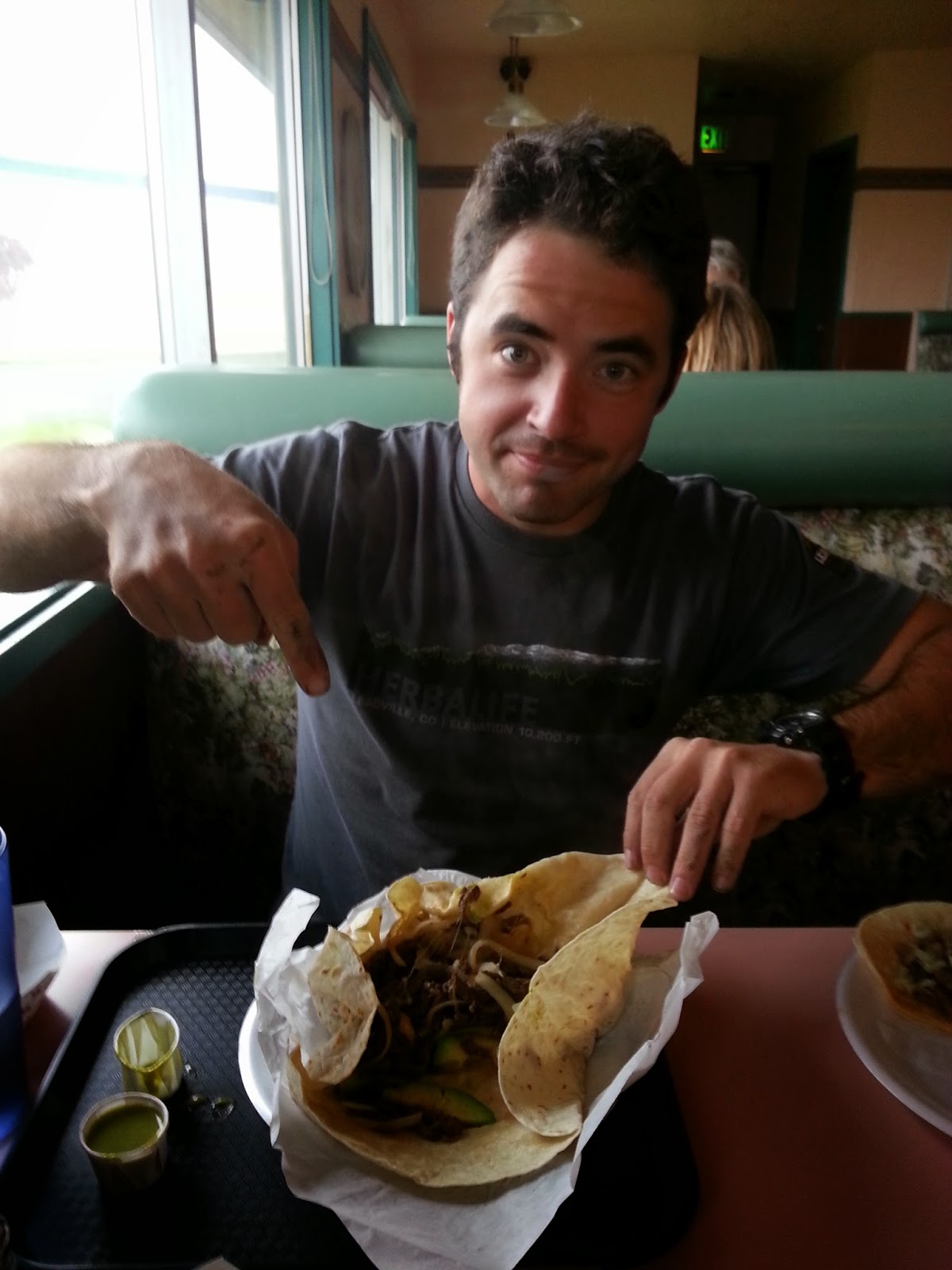 Then I drove home Sunday night, spent Monday in Seattle, and got on a plane Tuesday to fly to Arkansas. Hello! Joe Martin Stage Race starts tomorrow with a 2.5 mile uphill time trial. I am very excited.

I'll try and be more creative next time.
Tweet
Posted by Ian Crane at 3:21 PM