College Kids Nationals parts 2 and 3: A Tale of Two Silvers

After the disappointment in the Road Race, I tried not to let it get me down mentally. I was to use the anger in the other races. Kind of like Gordon from the movie Dodgeball. After all, Ryans Aunt, Mom, and Grandpa were coming to the TTT so I knew we had to deliver for our fan club. We had dinner at the fan clubs house Friday night where it was pegged in less then two sentences spoken that I'm part CanadIAN. I never notice it eh, but there must be at thing aboot the accents on the WI side of the world that make my dialect so obvious. Eh? Ok.

When I started the number pinning 1.5 numbers behind Ryan, caught, passed, and finished before he did I knew that there would be some magic happening. And by magic, I mean the free Qdoba that was served post TT. And by free I mean that it was part of our $200 entry fee for the TTT alone. And by part of the entry fee I mean that probably most of that entry fee went to Qdoba, because tts aren't the most expensive race in the world to put on. But I stuck it to the man when I took at least 4 dollars worth of Guacamole and THREE cookies.

The actual TTT went quite well. The course itself is hard, and the added wind made it mentally difficult also. We were down a rider early in the race (time is on 3rd rider across the line) so the three of us left had to really focus on staying together and riding fast. I think we rode really well. Steve maybe even offered more of a draft then normal when he realized the situation. After the turnaround,  I was able to use a combination of my girth, an 11, and some RR anger on the slight descents on the way back to try and tow the guys as much as possible. We fanned out across the line and soon found out our time was the current fast time. Only to be beaten by the next (and last) team across the line, Mesa St (the defending TTT champs). We lost by ~20 seconds. Mesa State finished with all 4 guys.

SMASHED THE QDOBA, compression, and hydration.

Finally it was crit time.

The course was long, with a uphill finish drag, and a shorter uphill followed by a long descent 600 meters from the line. The descent into the last corner made the finish hard to read. Fast forward an hour into the race. 3 guys up the road by 20 seconds. 7 laps to go. The three guys up the road were from Mesa St, Mars Hill, and Cumberland. The 3 biggest teams in the race. Steve got on the front and stayed there until he single handily caught the break with 2 to go. That is almost 5 miles straight on the front to chase back the breakaway.

Meanwhile, I was fighting to hold my position on the wheel of the guy who won last year. In previous Nationals, the bumping was minimum. By that, I mean I just had to shoulder check someone hard once and they would go away. Not the case this year. The last 10 minutes of the race were more physical then the lines at free slurpee day at 7-11. Are those actually physical? Anyways, I was fighting off a constant barrage of people the last 10 minutes of the race. I did not want to budge. Things went temporarily to shit on the last lap in the second to last corner. The pack slowed, anticipating the second to last hill, and I was chopped HARD on the inside. I went from 5th wheel to 20th wheel in an instant. I shot a gap and sprinted up the gutter up the hill to regain my position and worked my way back near the wheel I wanted to be on.

Then I promptly got a pedal in my front wheel. I heard a horrible crunch that I thought for a quarter second was my front wheel on its way to the garbage can. That 1/4 second of hesitation lost me a spot or two and as I dove into the corner I was prepared to either crash or sprint for the win. The spokes on COLE WHEELS are strong, because all this incident did was clip out a competitor. Which was my plan so I had one less guy to sprint.  The guy who won shot a gap towards the barriers and I had to wait for a hole to open before I could work my way through on the left, passing everyone infront of me except the guy throwing his arms up.

I thought for sure my wheel was about to do this...


So second place at nationals. Don't get me wrong, I am very happy with this result. But I don't think I can explain how it feels to come so close to a national title and not get it. My motivation to train hard and race hard is higher then ever.

Congrats to Kyle Knott of Mars Hill for reading the finish perfectly and having the sprint to back it up. 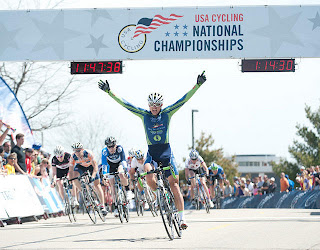