The Day After Tomorrow

I want to ease everyone's worries. I did NOT die on my ride on Saturday, but I came pretty close. I like to consider myself a pretty decently tough human being, sometimes I try food that I don't like and other times I do things I don't want to when I am tired. Super tough! Other things that make me tough: I occasionally tread water for 4 days in a row, I can cook Minute Rice in 30 seconds, I'm wanted in Nicaragua, I've won 3 Oscars, I know all the lyrics to the song "LDN" by Lily Allen, I once wrestled a Wild Boar (and lost), I've cooked with chili peppers, air-dried instead of tumble dried my clothes, ate 15 raw eggs, and drove Bellingham-Seattle with the windows down. Oh, also I switched my email account from Yahoo to Gmail.

So now you know the background of my toughness, let me explain how I was broken on a bike ride this weekend. I had a pretty excellent route planned, one that was different from my normal long ride route. I wore clothes for 45 and dry, but unfortunately less than an hour into my ride it turned into 40 and raining. Hard. And windy. At about the hour and 10 minute mark I was yelling at the world as I sunk deeper and deeper into the dark place that is the America-Canada border. 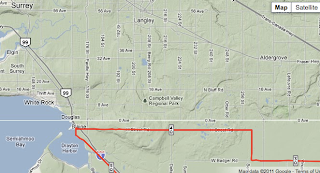 I normally have no problem with rain. In fact, my new Lazer Helmet rain cover was working magnificently! But unfortunately this helmet cover didn't cover my entire body, and my hands were becoming quite uncomfortably cold. 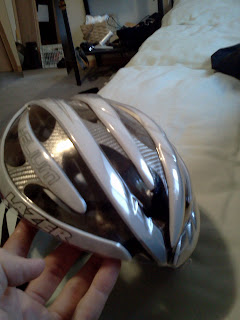 About 1 hour later, I was past the shivering point and I pretty much was about to curl up into a ditch, bury myself with leaves, and hopefully wake up in Nicaragua (even though I'm wanted there! Exactly, that's how cold I was). For about 45 minutes of that long straight road I imagined myself in a coffee shop coming back to life. I pictured in my mind a Starbucks in a shopping center. This image was in my mind so much that when I entered Blaine I rode right past a coffee shop. But it wasn't a Starbucks in a shopping center, so I continued on. About 2 minutes later as I rode around in circles trying to find this Starbucks I realized that a coffee shop is a coffee shop. I made my way back to that wondrous place that I passed in my first minutes in town, and was so cold that after I walked up the stairs to the shop I didn't really put together the pieces that the next step was to go in the door. So I stood outside the shop and cursed the world until I remembered that I should go inside. I had to peel my wool Defeet gloves off with my teeth, since the wool shrinks when it gets wet. I then used my sunglasses to get my headphones out of my ears, since my fingers were useless. I ordered tea, and then took roughly 4 minutes to get my money out of the ziplock bag in my jersey pocket. Problem, my hands hurt too much to actually hold the tea, so I just kind of sat there confused at the concept of potential warmth. Then I realized I was sitting by a fireplace! Who knew. I finally drank some tea and got all giddy inside as my hands started to get past the unbelievable pain point and towards the tingling numbing point. Then I remembered that my poor soaking wet gloves were sitting outside in the rain. So I ventured back outside, cursed the weather some more, and grabbed my gloves. I put these on top of the fire, and sat some more. About 10 minutes later, it occurred to me that I probably should have squeezed some of the water out of the gloves, so I did that. As I wrung water out, the next thing that occurred to me is that I probably shouldn't be doing that onto the nice wood floor of this establishment, so I stiffly put a pile of napkins onto the floor and continued squeezing. Sorry!
Huge puddle on the floor aside, I started to gain some motivation to make my way home. I went and got another pot of tea. Put the teabag and poured all the water inside my water bottle. Which after the fact I realized that I'm pretty sure that's how you can get cancer, but I think that having your inside temperature be 50 degrees stops water-bottle cancer from happening. So then I (ps- Tela, I have no idea which then or than to use there. Sorry. I tried both and they both looked the same and it made sense anyways. I thought it'd be funny to say and made since anyways) had a BRILLIANT IDEA!! I hazingly-stumbled my way to the register and asked the question that would determine my fate for the ride home----


"This is going to seem like a really weird question to you. Uhh do you have any, like, uh, rubber cleaning gloves or something?"
Barista aka Life Saver, no hesitation "Yes, would you like some?"

Jackpot! Then came the difficult decision on whether these gloves should go inside or outside of my other gloves. If I had dry gloves, the answer would definitely be on the outside. But since my gloves were still wet, I decided on using these as a baselayer glove to hopefully create a hand-sauna. Problem- size Small latex cleaning gloves are extremely difficult to put onto slightly wet hands. After a lot of wrestling, I succeeded, and set off on my journey home.

For 5 minutes I was great! And then it was freezing again. So I rode as hard as I possibly could for the next hour and a half to get home. The fun part is that my heart rate never got out of endurance heart rate while I was going as fast as possible to get home! So does that count as training? AKA extremely good training!

If you were super concerned, I made it, and it took 3-4 tries to correctly type in the garage code for me to get in the house. Here I am!

After showering, "warming up", eating, drinking tea, etc, my legs didn't hurt. I went on this big ride and went pretty hard and it felt like I hadn't ridden at all! New training plan- ice bath pre-ride. By doing all your training with numb legs, you will be able to go deeper, hit your intervals more effectively, and theoretically increase your training load. Try it!