I Did Something Hilarious This Weekend!

Let me tell you all about it. I did something quite strange on Sunday, November 20th, 2011. At one point participating in this sort of... event... was something quite normal for me to do. Now at these events I'm more out of place than Spencer at an Under-Eaters anonymous meeting.

BUT FIRST! Let me tell you about the Ian^2 Adventure that took place at roughly 9:08 on this Wintery Sunday morning. I woke up to approximately 3mm of ice on all my windows. An EXPERT removed this for me, and I took off on the driving mission to pick up Ian Terry for our initial journey to pick up Lang, to go to the event. Excellent. While driving, I noticed that my mirrors were still icy, so the adventure began when I pushed the window-down button on my beautiful car. Whirrrrrr-grinddddd (sound of gears spinning inside of my car door trying to make my window drop down). Whirrrrrrr. Nothing. No movement of window. So here I go and decide that my window must be frozen shut, so I place four fingertips onto my window and gently try and provoke it to start working. Nothing. I whisper into its ear. Nothing. I apply slight pressure to the window in the general go down direction and suddenly it just DROPS. Now my window is half way open, it is 0 degrees outside (hello my non-American readers!) and my nose is starting to get cold. No worries, I push the up button hoping that my window now works, and whirrrrrrrrr. Nada. Excellent! I arrive at Ian's beautiful home and he has duct tape! With me using the four-finger technique to slide my window into place, Ian (confused? I don't talk in third person) put suture-esq duct tape strips onto my window. Swag! 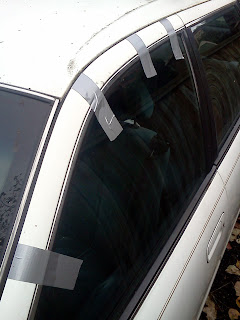 Do not come to my house and remove the tape and slide the window down and let your self into my car and steal my chewing gum and my quarters.

Ok, so then we picked up Lang. Who was all dressed up in bike clothes (hint! We're going to a bike race) 3 hours before the race.

Then we went to a cyclocross race! What? Yes, I tried to do a cross race this weekend.

I have ridden a cross bike 2 times since last December. Once on Thursday, and once at the race on Sunday. And Thursday was on a gravel trail, and Steve still dropped me on the "technical" sections. So I went to this bike race with simple goals: Bump Ian Terry in a corner, get heckled, not crash, ride hard in the sections that I could ride hard in, and beat Lang.

After almost missing the start because I was talking to my mom and enjoying the company of my puppy, I was in the zone. I decided that it really wasn't worth it to kill myself to make absurd passes in the first couple of difficult corners (at least to me) so I was content to just wait. Exciting moment one! I bumped Ian in the about 4th corner, and than Morgan Schmitt closed the door so Ian had to get off his bike and yeah! Great fun success. It's ok though, because he returned the favor about 13 seconds later. I really didn't like this section of course right here though- 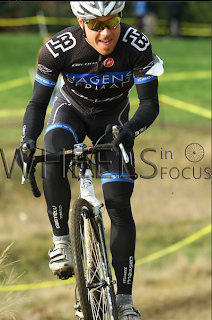 Oops, that's not me.

There was one section of sustained pedaling that wasn't hampered by silly corners that made me use my brakes. So on the first lap I went ballllllistic on this section and went from roughly 18th place to making connection with the lead group by the end of the first lap. Great! 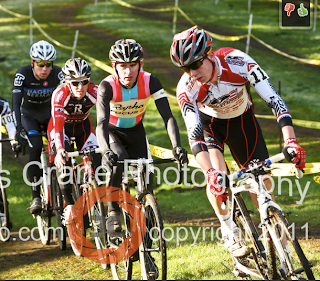 But this is not a Fairy Tale. Unlike when this guy races something outside his forte- 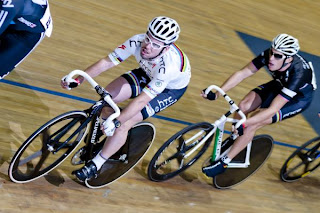 This does not happen for me- 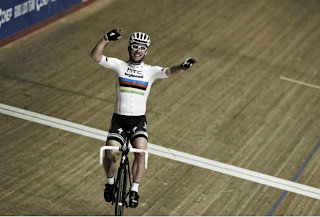 It's ok though. I made my way to that front group and stayed there for about 2 minutes and 13 seconds. I don't think that those guys realized that the corners didn't have optimal traction or surface material, because they went through them much faster then I could. 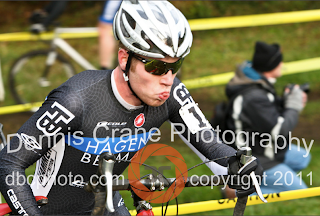 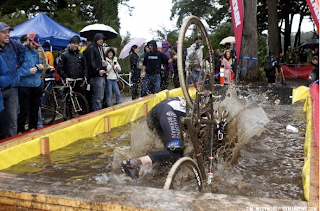 It became time to do something that I'm more comfortable with! Sprinting on pavement! Except for the 40 psi in the tires and the 187degree corner 30 meters from the line part. But an opportunity to sprint a 45t chainring is something I don't say no to. 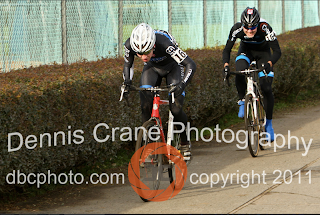 Steve told me that cyclocross racers must sprint in the hoods, so I tried my hardest. 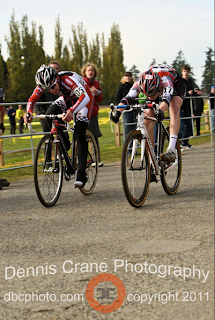 I had good fun, but definitely don't have any absurd thoughts of needing to do any more races. Because I might need to clean my bike if I do another race. Maybe I can con Steve into cleaning my bike.

I bumped Ian, I didn't crash, I beat Lang, and I was heckled! My favorite was "THE JUNIORS ARE BEATING YOU!!!" C'mon guys, Steve is 21. Give him a break.

OH! My helmet cover is so awesome! My head was the warmest part of my body- Check the steamin' 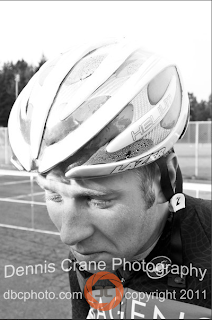 The hilarity did not stop at the end of the bike race though. Steve and I are slowly killing the world by each driving our cars into Seattle. Having no idea of the others schedule, we ended up leaving roughly 4 minutes apart to head back North. Since Steve drives like a maniac on crack (luckily his vanagon restricts his psychosis), he was putting some time into me. Until he ran out of gas! Sucka! He made it roughly .5 miles from the exit, and then was crawling with the flashers going. I was prepared to rear end him to push his car to the gas station, but instead all I had to do was clear an intersection so he could safely roll a stop sign and coast to the gas station. So I won the race home!

Frostbite report- Turns out my hands still hurt! And it also turns out that my parents don't find my frostbit hands as hilarious as I do, so my dad surprised me with a new pair of winter riding gloves! Thanks Dad! And my mom brought me three different pairs of gloves to try for many different weather conditions. Now nothing can stop me.