This is in no way harshing any other race in Washington, Oregon, or Idaho. I've never raced in Montana, North Dakota or Wyoming so I can not evaluate their local scene. Let me preface this by saying that as a bike racer, I'll do most any and all bike races. This is generally how things work. Regardless of the race, I love doing it, so the chances are that I will be there. However, there are some qualities of races that leave me grinning for days after the race is over.

This weekend I got to do one of those races. What made it even better was that it was a hometown local race. As a rider, it feels good to go to a race and feel like some genuine thought was put into every aspect of the race.

TDLC Events put on the Redmond Derby Days Criterium. This was the 100th year anniversary for the race, and takes place in downtown Redmond, right smack in the middle of the Derby Days festivus. Ignoring the general debauchery that was taking place nearby, I warmed up with a huge elephant ear while challenging local children to jumbo chess games, all while sword fighting clowns and marching in parades with cheerleaders. Ok, sorry, off track. But what this means is that there were stacks of crowds in the general vicinity of the course that were accidentally lured in by the sounds of Bilko screaming, the smell of BikeSale's baby oil glistening, and the sound of Danny crashing into the corner (too soon? Heal up, buddy). This is excellent, thing number one that was great about Redmond Derby Days Crit was the accidental fan support. TDLC put on a show, and this drew the spectators in. Excited announcer, consistent prime bells (more on that later), and energized fields. Racers feed off of crowd support. Making ALL races interesting lassoed in support from people who had never seen a bike race and were sucked into the spiraling, crazy vortex that all of us find so serenely normal.

What adds an adjective to the front of the word "event"? What makes something a great event, versus a terrible event? What makes something a great event compared to an event event? What makes me want to write a post applauding the fun I had at some local race? I showed up this race and felt like more than a participant. Thing number two? Perfectly advertised prize list and prime list. This has nothing to do with the total prize list, I'll talk about that later. Having the prize list and prime list advertised well beforehand allows the racers to not race at the whim of the bell, but have a plan. With random primes- some are cash and some are fresh bars of soap- you never quite know exactly what you are going to get. Since I smell fantastic naturally, I'd rather not waste my energy sprinting for soap. However, knowing ahead of time that there were X amount of 50 dollar primes, X amount of 100 dollar primes, and one 250+ dollar prime, we were able to plan our strategy around that. The next great thing? Every single payout position more than covered the entry fee. That means that if you were getting paid, you didn't get a prize that was half of what you already paid to compete. I made money, but wait, I lost money? I would rather races pay less places, but with more money for those places. OK, fine. I'll talk about the total prize list. For the P1/2, it was $1000 dollars to win. ONE GRAND! Money went twenty deep. Why weren't there more people racing? For such an incredible prize list, the field was quite small. For a local race, this is roughly FIVE TIMES the biggest winning prize I've ever sprinted for. Not only were the prizes fantastic for the P1/2, but almost all categories had substantial cash purses. Which leads me to my next great thing from the Redmond Derby Days criterium. Every single prize envelope was cash. No checks. I don't know if I'll be able to accurately describe how much easier it makes for teams to split prize money when it is all done in cash. With checks, one person has to deposit all of them, wait for the money to clear (hopefully), and then deal with distribution. With cash, IT'S DONE ON SITE. Then you can right away make irrational purchases instead of saving your money to pay for food in the winter time. Whoops.

Ok, it's true. A large prize list is a great addition to any local bike race. Racers love getting some sort of a financial kickback for their efforts. Whether or not said racer is a multi-million dollar lawyer winning a 50 dollar prime and feeling awesome, or a jobless wannabe professional cyclist like me trying to win money to survive the fall and winter, people love to win money. However much money is won, that's not all that gives a race a great vibe and a reason to compete. Like I said earlier, I love racing my bike and still go to races with small prize purses. How about the little things? Redmond Derby Days focused on those little things and that's how this local criterium went from just an event, to a show.

The next great things? Huge checks, podium girls, and champagne. As a promoter, for roughly four dollars, you can buy a bottle of cheap, disgusting tasting champagne. Then, give this champagne to an excited winner to shake and spray over everyone and everything. You have now created a memory that will last forever. Most people* have never recklessly sprayed champagne over a crowd of enthusiastic onlookers. Most people* have never shared a bottle of champagne with 4 other winners.
*excluding HorndawgBroCal

Having a podium presentation with champagne makes a victory that much more memorable. Next, I may have gotten my first kiss on Saturday!!!! My girlfriend was a little jealous of the podium girls, so I allowed her a kiss on the cheek also. All is well. Let's face it, watch any bike race on TV and the podiums have podium girls. Like I said earlier, making memories. For the last memory, what do I do with this new giant check?!? I have wanted one for a long time, and it is quite the sensation to hold a large fake check in the air while getting kissed on the cheek.
The next hassle was fitting it in the bike box on the way home.

This was a local race, I was able to drive home.

Thanks to TDLC cycling for a great event (and for the new coffee grinder that's on its way)! 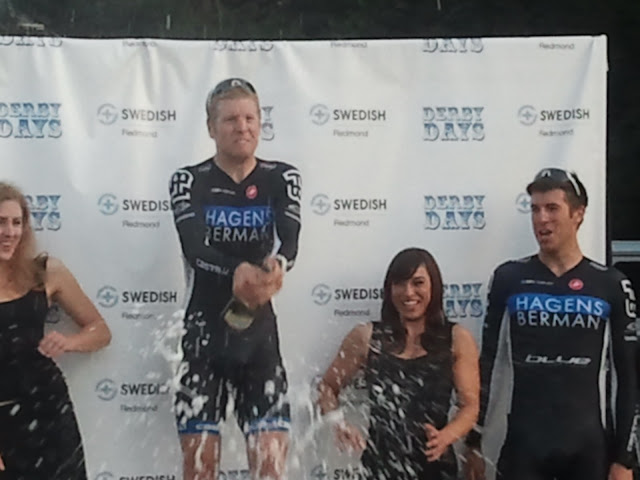 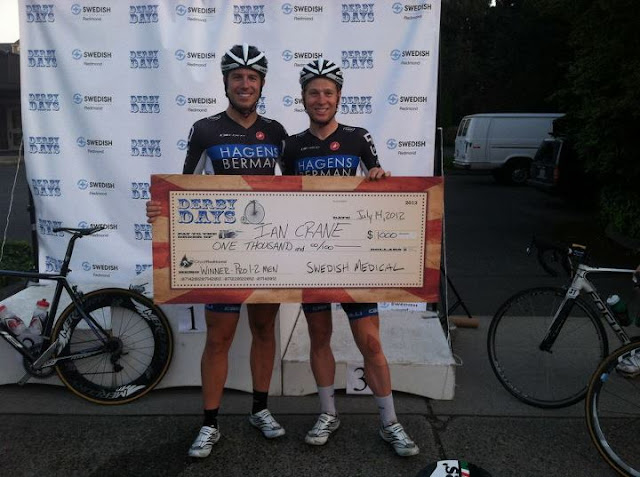 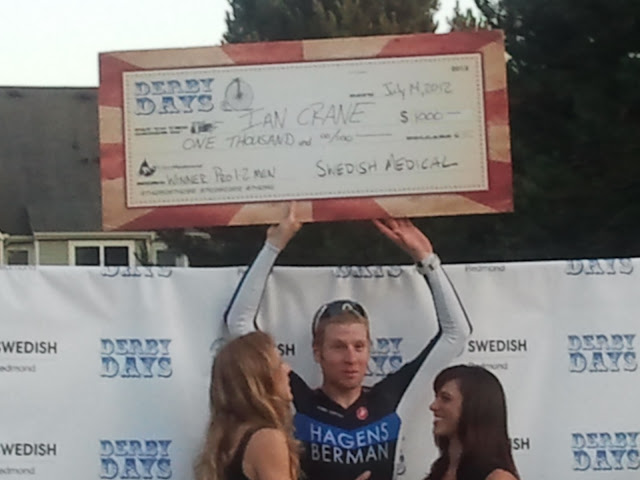