Woo hooo this is quite the story.

I had a teacher for a public speaking class in high school that claimed the biggest faux-pas you could commit as a speaker would be to announce something before you spoke that would either lessen your credibility or draw attention to something. Ie:

"I didn't really read much about this subject, but here I go"
or
"Sorry I've got the sniffles today so try not to pay attention to that too much"

However, I feel like with blogs I can make my own rules. I feel sort of like Jim West from the Wild Wild West movie. So I'm comparing myself to Will Smith because I'm family friendly and good for action and comedy!

So, the above explains why it's appropriate and fair for me to start my blog letting you know ahead of time that it's a great story.

The setting: Augusta, Georgia.
The date: Saturday in between the crit and road race
The characters: Myself and a teammate who I will refer to as Rick to keep his (or her) anonymity

So Rick and I were on a bike ride, right? Just cruising. Rick and I rode to South Carolina and back! It was a great trip. We got slurpees, the day was pleasant, and the gas station attendant was quite friendly. He didn't even believe us when we said our bikes were worth 200 dollars! Smart man.

We continued on, riding single file on the large busy road, then riding two-abreast on the quiet country roads. We were just chatting, Rick and I, about our goals and dreams, about our hopes and families. I think Rick was even whistling! It was a very nice day. Rick and I were riding next to eachother on this quiet country road (straight for miles) when suddenly, a car pulled up next to us.

I didn't have a recorder, so I can't be sure what exactly was said. Basically, fat man in big car= angry at skinny boys with shaved legs for slowing down his drive. Here is the rough transcript:

Rick: Hello, excuse me sir, if you wouldn't mind pulling over so we could talk about this politely like gentlemen.

Followed immediately by slamming on his brakes and pulling off the road.

Rick gently put his bike on the ground and readied for polite interaction. Unfortunately this was not the case.

Rick: I'm sorry sir, my friend and I were just casually enjoying our day, following the rules of the road that we are held responsible for following. I'm sorry that we held you up by a couple seconds, unfortunately it seems that by stopping you are now held up even more than you were before! (Rick gently rests his hands on the mans window frame, while trying to speak softly and friendly)

Car: MOTHER F'ER IT WAS TEN SECONDS YOU POS I HATE YOU AND YOUR KIND I WAITED TEN G'DA(*W&^*%&^% SECONDS TO PASS YOU.

Side note: have you seen those cartoons where the character gets really red, then smoke pours out of their ears, then finally a train whistle goes off? Correct, this was happening to the man in the car. 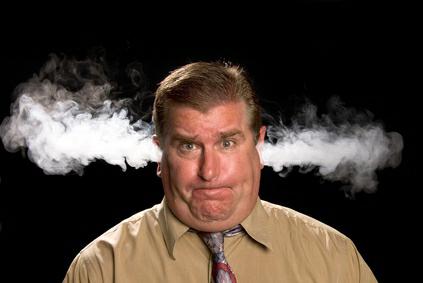 Car: YOU TOUCH MY CAR AGAIN I'LL TAKE YOU OUT

(I was standing in front of the car)

Another side note. It's probably pretty confusing that I refer to the mean man as "car", but I didn't have a chance to catch his name. This isn't like the movie "Cars", where the vehicles talk. But it was an actual man in the car. He looked like a fatter version of the KFC man.

Rick: Ok you have a nice day.

Car accelerates, burning tires away. Rick gently slaps the bumper as it drives off (most likely to get a bug off the bumper) and starts to walk towards his bicycle. Car squeals to a stop, this time in the middle of the road. There are now two cars held up in one direction and one in the other. I can't believe that us two cyclists were such a delay on the road! The man gets out of his car and charges towards Rick. I start to rapidly make my way towards the two of them, but it was not necessary.

Turns out that Rick was about 1.5 feet taller than this man. I kid you not, the man from the car charged at Rick, skidded to a stop much like he had done in his car twice already, and did one of those slow motion look up from the feet, see the chest, keep looking up and see the chin and finally the eyes. I thought that this only happened in movies, but as Rick stood up straighter I saw this man rethink everything that he was planning, spin on a dime, and march right back to his car saying nothing. 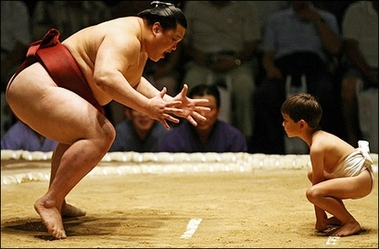 He then got in his car, accelerated rapidly onto the OTHER SIDE of the road, and slammed on the brakes there.

Rick and I started to ride away.

Four to six minutes later we hear sirens from behind us. First of all, amazing. Second of all, really?

So we pull over again, for the second time in ten minutes. Don't worry coach, I didn't count these as training minutes. Police officer steps out of his car (also parked in the middle of the road?) and begins to talk to us. Luckily, I did have the recorder going for this. Here is the direct transcript:


Police Officer: Did y'alls have an encounter with a vehicle a couple minutes ago? Was that y'all?

Rick: Yes that was me

Police Officer: Y'all racing right now? Y'all aren't mid-somethin right now? I'm not slowing y'alls down or anything? Y'all came here to ride bikes, so y'all could be doing that right now, for all I know

Police Officer: So what happened?

Rick: He was angry at us for doing what we are legally allowed to do, I tried to tell him that and he got quite angry.

Police Officer: Awww yeah y'all weren't doin nothin wrong I already told him that. Y'alls got all the same rights as motorcycles, did Y'all know that? Y'all just minding y'alls business. Y'all having a good trip? Everyone nice to y'all?

Me: (in my mind) Except for this a-hole

Rick: Yeah for sure, except for this a-hole

Police Officer: Well y'all know that rednecks around here, they carry guns and shoot first ask questions later, y'all know? Y'all got to be careful out there, y'alls don't want to instigate anything with some dumb redneck, y'all understand? Y'all have a great day. 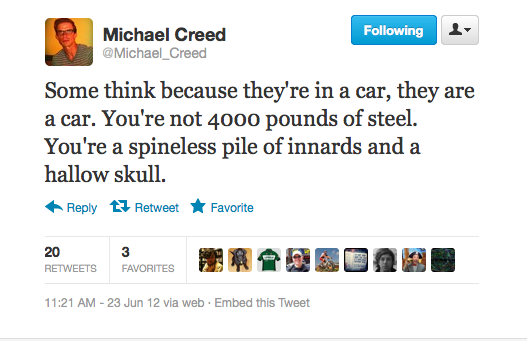 LOLTweet
Posted by Ian Crane at 9:52 AM