Not easy to write.

Saturday= Day off for Kennett, Jon, Logan, Gabe and myself. We went riding. I drank San Pelly. Stylish. Steve/Danny/Marcel raced u23 and Steve stomped it, getting on the podium with a 5th place finish.

Racing aggressive pays off. Kennett went in the early ~9 rider move on the first lap. They got three minutes quickly. Awhile later Gabe bridged up with two other riders. Soon after that, I followed a move and crossed the gap relatively quickly. Fifty percent of our team is now in the breakaway at the National Championships.

Please go re-read the part about Gabe from my post from the crit. He selflessly took the role of work horse, and single-handily drove the break of 15 or so for the next 70 miles. Actually. At one point our break had 22 riders. Maybe 5 people were actively working. Gabe did 80 percent of the work to keep this break off the front. He rode so hard that he got a nosebleed. He fixed that problem, then went right back to work. I sat on the ENTIRE day. Kennett did a mixture of sitting on and rolling through. Things got hard with 3 to go and our group became 15. Then things got harder with 2 to go and our group was 12. Both Kennett and I were still in the selection. Gabe came off probably 14 times during the attacks, and kept crawling back on, going directly back to the front to set the pace to keep our move off the front. He finally got popped for good, and I'm sure the only reason he didn't get back on is because he was getting a Medal of Honor as well as a leg massage from supermodels while relaxing on a beach- because he deserved it. 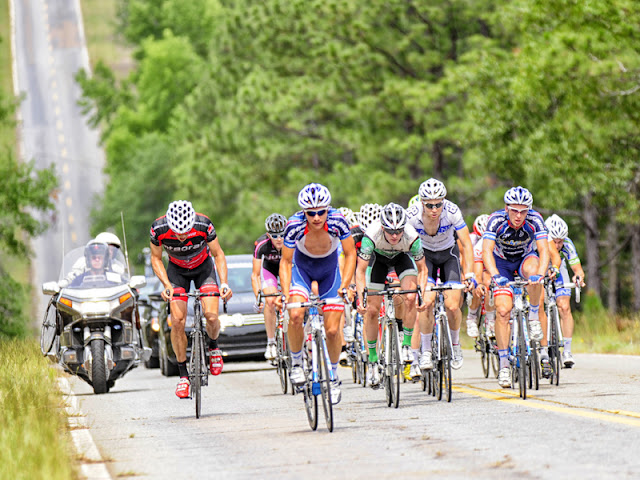 With about 40 k to go, the two riders who I'd pegged as the strongest in the move took off. I knew that this was the final selection so I went as soon as I could to try and get to the two solo. I got within ten bike lengths before the road went downhill, and I started to go backwards. Luckily, another guy bridged up to me and closed the rest of the gap, and the front of the race was us four.

We soon got 30 seconds, then almost a minute. Over the next 20k it stayed at about that time gap. Heading into the finish hill, I knew I was in trouble. I got gapped a bit on the 1k finish hill, and got 1 lap to go a couple bike lengths off the rest of the group, but still in contact. About two k later I was in more than trouble. We hit the biggest hill on the course and I couldn't match the pace.

I went as hard as I could alone until I blew completely. The first chase group passed me and I couldn't even consider getting on. The second group came past and I stayed in for roughly 12 seconds before dying a fourth death on the day.

The three guys I was with stayed away to the line and fought it out for the jersey. Congratulations to Julian Kyer- often times in bike racing the strongest guy doesn't win, but on this day, Kyer was definitely the strongest.

This race brought a pretty strong range of emotions. I was unbelievably bummed to straight up get dropped out of the winning move at the National Championships. I was upset that I couldn't capitalize on the efforts of my teammates, notably Gabe and Kennett. I was mad at myself for not being able to push myself more- just that little bit extra. Mad at myself for going from the very front of the race to the back of the race instantly.

However, I was happy that we took the race into our own hands. We were the best represented team in the break, and until my lights went out things were falling into place. I got a text from Lang that I think helped clear things up to me. He said "You've got to make the break before you can win from the break". Bike racing is full of small improvements and huge disappointments. I am sure that no-one can find success in this sport without first feeling those disappointments. One of the best things about racing bikes is that there are more races soon. More chances to make that break, because eventually, I will win out of that break.

I am extremely bummed that I could not close out the race on Sunday. That is definitely a taste that is going to stick around in my mouth for awhile. Not in a bitter way, but it will serve as training motivation for quite awhile. I may not have left Georgia with what I came for, but I am not leaving empty handed. Well, technically empty handed since I'm not carrying anything. But although I am not leaving with a new jersey or a medal in my bag, I do think that I am leaving Georgia a better bike racer.

I've used this quote before. I think actually with my nationals post last year. But it's bloody brilliant so I'm putting it up again.

“As humans we’ve gotten so far from what we were supposed to do that we’re always searching for something that makes us real again, that gives us that feeling of doing what we’re meant to do. For me, bike racing is that.”