WE WON THE TOUR DE DELTA!

Sorry for ruining the surprise. If you know of bikes, you probably already know that this happened: 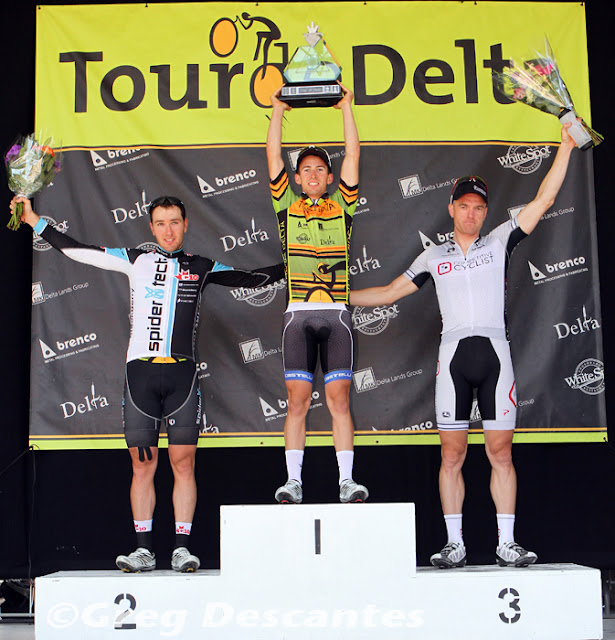 That's right people. Lil' Steve delivered at the end of a long weekend of racing and other stuff and won the overall at the Tour de Delta. This will probably be a long and drawn out post filled with several stories, ups and downs, and one really f'ing fantastic ending. I'm really happy, so yeah. Let's rewind back.

I crashed. I would say surprise, but really, who's surprised anymore. I made a fall about thirty minutes in when I came around the third corner on the course and ran directly into a bike that had been crashed by some hombre from the North.

FF, med tent, "I strongly suggest you get shoulder X-rays", hug it out with Cody, watch Steve get 5th, head to a Canadian hospital, get threatened with a $900 "out of country" fee, say F that noise, drive to Bellingham with Alan. Then the fun begins.

After almost immediate X-rays, we sat in the waiting room for almost 3 hours. At around 1 AM.  Here is how I spent my time:

-Trying to get photos of Alan sleeping. This man seems to not enjoy getting photos taken of himself, so I figured I could get some clutch shots while he was sleeping. Turns out that he has survival instincts that push him out of the depths of dreams the minute I began to hold my phone up to snap a photo. Here is the ONLY one I got: 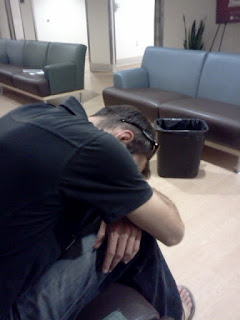 -Next, I spent several hours watching this cockroach move across the ceiling. Quite, quite slowly. 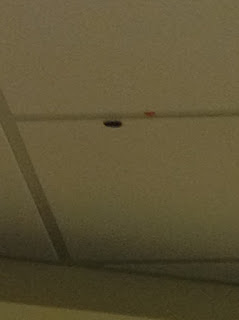 Ok, fantastic news, I was seen by a Doctor, deemed not broken but strained and prescribed a sling, and spent the night in Bellingham. I ate a crepe, got some Bromelain, and returned to America's hat for more bike racing. 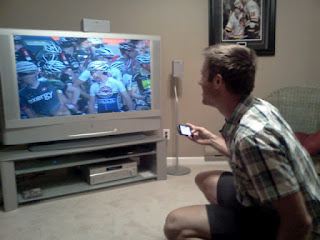 The race from the day before was on TV,  and David spent quite some time trying to photograph himself.

Turns out my arm was very stiff. I decided that I would be much more useful in Sunday's road race than a crit. Figured that the less out of the saddle accelerations I'd have to do would be better. Here is the catch. Tour de Delta is an omnium, but they run it as a points race. Which means that you have to START every event. Which means that I had two very humiliating laps to perform during Saturday's race. Here's how I benefited from this:

1) Did not have to fight for starting position. This race involves a long, slow and tedious trip up the start/finish line behind a Celtic marching band. Instead, I got to sit around riding slow in the back of the group as the last rider.

2) Two laps of GLORY. I know I said that it was humiliating, but I did two laps of coasting on my tops as the last rider in the group then abrubtly pulled off. Mission complete.

Then I got to watch Dreams (Jesse) win three primes, Steve sprint for 2nd on the day, and the rest of the guys scalp the field.

Four laps of one circuit, 30 K to another circuit, and ten laps there.  Going into this day Steve was sitting in 3rd in the omnium, but very close to the win. We had a team meeting, knew what we needed to do, and set out to do it.

For the first thirty minutes of the race attacks were going left and right, and our team was on 'em left and right.  After thirty very uncomfortable minutes, a break finally went away with Gabe in it. Problem- the break was too big. There were ~10 guys + Gabe.

Since Steve was so close to the lead, he needed the points that were all up the road. Both the leader and second place had small teams and no desire for those points. It was a gamble, but Steve called us to the front. Heading into the second lap of the first circuit, David, Jesse, and myself got on the front and began to take control. We wanted the break to be up the road, but we needed it to stay close enough that we could really turn the screws on the second set of circuits and bring it back before the finish. Soon Dan and two riders from Pure Black Racing joined the three of us on the front. The responsibility to bring the break back was on the six of our shoulders.

Up the road, Gabe sat on the break. In the group, Danny and Steve sat behind the three biggest riders in the race (and Dan) and saved their energy, waiting for the fireworks that were soon to come. Danny helped roll through every time we had some trouble or needed a bit of a break. We continued to rotate, and when we got onto the second circuits with 80 k to go the break was just under two minutes up the road.

We kept rotating through. People were getting ancy now, sending useless attacks on downhills and straight flat sections. We kept our cool on the front, Steve shouting directions behind us, and we reeled in the attacks with no panicked surges.

Here are some things that were really great about this:

1) I followed lots of attacks on the first lap of the first circuit and my arm hurt terribly. Then it went numb! Then I was able to ride in the saddle at the same speed for 60 miles. Sorry, 100k.

2) When leading the peleton, you get to set the pace up the hills. That means the first couple laps of the second circuit we went Ian-Speed on the climb! 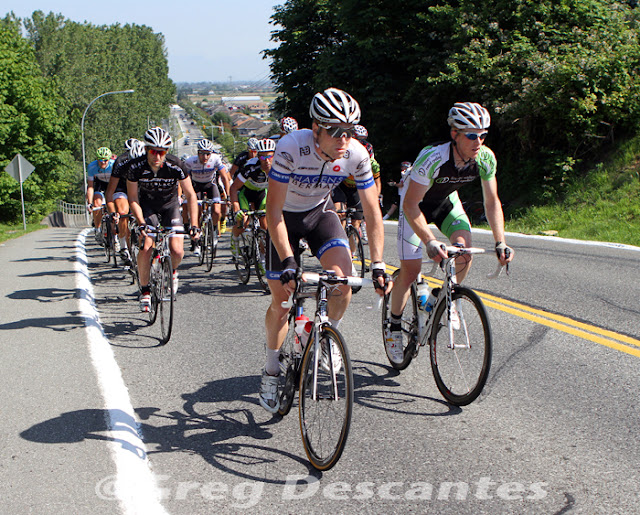 Gradually we were all starting to fade. The break became 90 seconds, then 75. Soon it was under a minute. David, Jesse, Dan and I took our turns getting dropped on the circuit climb and clawing our way back to the front to join Danny and chase some more. Eventually the four of us came undone completely and were done for the day. I raced for 2 hours and 12 minutes. This was 62 miles. We were on the front from mile zero. 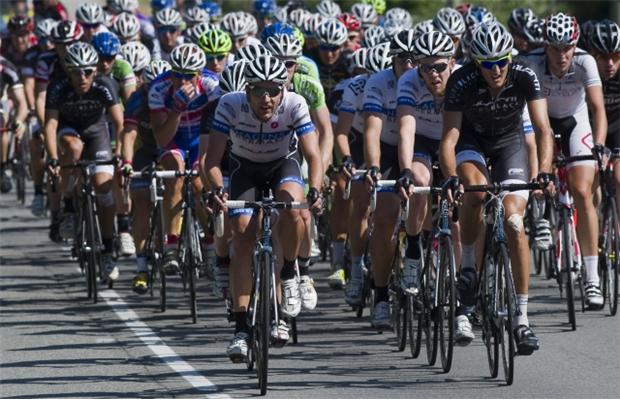 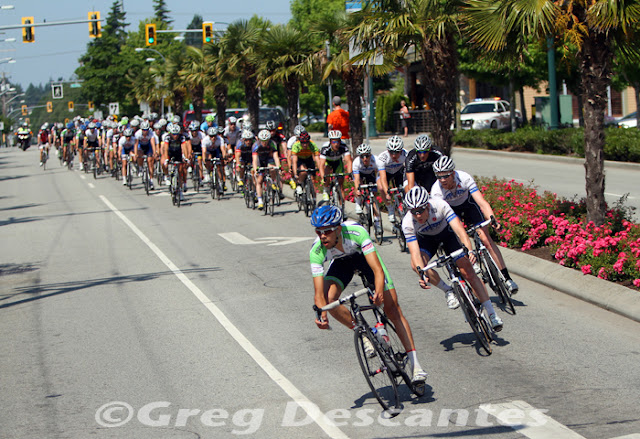 Then it was time for Gabe and Danny to take over. Gabe came off of the break on the climb with ~35 k to go. He was cramping. He told us this in the feed zone, and since Gabe does not tell lies, we knew it was true. We thought it was down to just Danny and Steve, but Gabe wouldn't have that. Soon he and Danny were rotating on the front, closing down the last 20 seconds to the break. With 20 k to go a move of ~7 went up the road and established a sizeable lead.

It was now Steve's turn.

He bridged to the move with one other rider. THEN STOMPED THE SPRINT AND WON THE DAMN BIKE RACE!

People who aren't fans of cycling do not get to see the team aspect of it. They don't see how six riders can commit fully to supporting one.

Steve was the only person on our team to finish the road race on Sunday. Every single one of us rode 100 percent committed. We had no personal ambitions and Steve paid us back by winning the day and winning the GC.

We were more than thrilled to end the weekend this way. The announcer called it an upset. Maybe an upset on paper, but this is no Little Giants story. Well maybe, because Steve is very little. In fact, the article that was written about him for the paper was titled "Pint-Sized Pedaler...". This is truly the happiest I have ever been about the title of a newspaper article. Did you all think that I could really go an entire post talking about Steve, then reference the Little Giants, then not make ANY size jokes? Anyways, we came into this race knowing that we had a rider who could back up our efforts. We raced like we belonged to be racing how we did. In order for an "upset" to happen, you have to take that risk. Full credit to Steve for having the confidence not only in himself but also in us to put us on the front so early in the day. This was the greatest cycling accomplishment that I have ever had the pleasure of being a part of and although I hope for many more like it to come in the future- I will always have this memory.

Want to know when it feels good to drop out of a race?

Best wishes go out to Cody Campbell. That guy has been hit with the bad luck stick way harder than even I have this year and he went down in the same crash that I did, hurting his hand. I know he would have loved to been out there with us on the bikes on Sunday, but instead he spent all day in the feed zone.Thanks to Alan and Doug for uh, everything.

Next up is the UBC Crit tonight followed by Gastown on Wednesday.Tweet
Posted by Ian Crane at 9:07 AM