The first bigger race of the season tends to be a shock to the system. The speed, field size and aggression are a direct contrast to the long base miles and solo tromps that bike racers grow accustomed to during the off season. Luckily, I had tried to prepare specifically for this moment by spending many-a-moments riding the rollers in my garage while watching The Walking Dead. If you are confused by that: my rollers have very little resistance so I spin 'em fast and The Walking Dead trains the mind on how to handle aggressive situations. I was not the only one to prepare for San Dimas in alternative ways. In fact, Jon Hornbeck was trying to make a statement. You see, he normally drives around in a small and white Civic. To demonstrate his change in mood and mental preparation for the San Dimas Stage Race, he showed up to the TT start driving this beast: 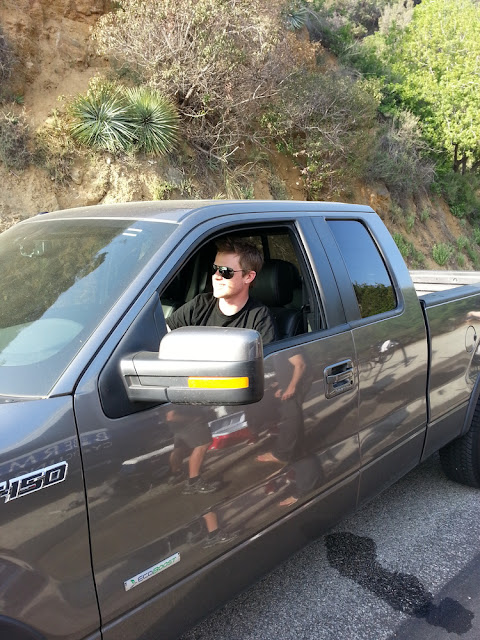 It worked. Jon rode a brisk uphill TT so I immediately bought a cement truck to drive around. In this sport, it's all about preparation. I'm trying to avoid a strict "the course is like this, I got this place, and I wish I got this place" race report. However, one of the things that makes SDSR so difficult as a kick-off for the season is the courses that we get to pedal around on. The TT is 4.25 miles and all uphill. I do not really want you to think I'm a liar, so I'll specify that there is actually about 500 meters of flat at the very beginning of the course. I argue that this is the hardest part because the deepest ventricles and valves of your heart desire nothing more than to crush that first minute out of the start house. Go ahead, I dare you. Then blow up in spectacular 4th of July fashion three and a half switchbacks into the climb. We all rode hard, were jubilant about our Reynolds wheels and Bell Javelin helmets, and finished with results that, I think, we were generally OK with. That's the beautiful thing about any shorter time trial- it's really easy to look back at it in the parking lot and imagine yourself going minutes faster. We were all looking for a bit of extra strength leading into the road race, so Doug (super mechanic) took care of that for us.


Friday night was stressful. Staz, Heeley Swag, Lil' Steve and myself sat around a kitchen table and did something that I'm still not sure I understand. We played Settlers of Catan, a board game with the main goals being to confuse you, to instigate fierce discussions over the merits of rocks and grain, and finally disappoint you completely when you lose the longest road card. In one night we turned from normal humans into, well, less-normal humans. I feasted on Greek yogurt and schemed for the next day's road race. More course description. The road/circuit/loop is seven miles of terrible roads. We do 12 laps. It has two climbs a lap and since it takes place in a public park, it also has many road gates, kiosks, swingsets and hot dog venders to avoid. I have done this race once in the past, and what I remembered mostly was that it was difficult pretty much the entire day. I decided that in order to succeed, I'd need to channel a different power animal than I normally would. For those of you who've never read my stories before, it's fairly beneficial to your success in pedaling to have some sort of creature that rides on your shoulders. Even if it does nothing for you, I've found that animal-embodiment helps in the general intimidation sense. This course is too hard for me to carry around a gorilla on my back, so I had to go lighter and trickier. In a perfect sequence of events, Friday night Doug found this creature in the garage: 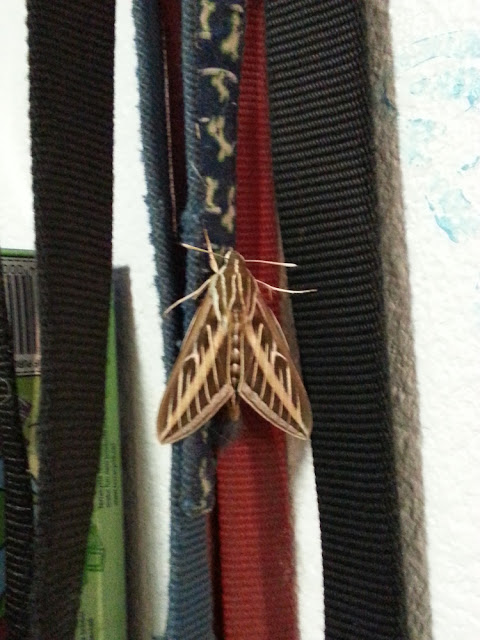 Normally, I'd laugh at anyone that chose a moth as a power animal. For the San Dimas Road Race, there is no better creature to have. Moths are great at blending in. Moths are quick, moths are fighters, and moths weigh hardly nothing. This was a good combination for the road race. I'd say it was a winning combination, but since I did not win, that would be falsifying a testimonial. Which is not chill.
As predicted, the race was very difficult. Bissell made it clear from lap one that they did not want a break to get a significant gap. That means they rode the front hard from very early on. The combination of that, plus the climbs and the wind made for a very long 3 hour race. After Gaimon (Bissell) crashed, the race was calm for a lap. This made the remaining couple of laps extra-brisk. Chris Stastny kept me in great position for the third-to-last and second-to-last climbs, and I crested in the front 20 comfortably. Then on the last lap people went really fast on the final climb, and my moth like behavior wished that the moth at least had a gorilla tattoo on its wing for a little extra gusto. I came off the group and rolled in 15 seconds down.
The crashes and pace of the road race cut our field in half, and Sunday's crit was a small field. I knew that a break was going to go, it was going to go early, and it was going to be gone for most of the day. I figured Jamis HB (leaders, strongest team in the race) would want a break of people out of GC contention to be up the road picking up the time bonuses and neutralizing attacks from the field. I wanted to be in this break for three reasons:
Curious of my crit power animal? 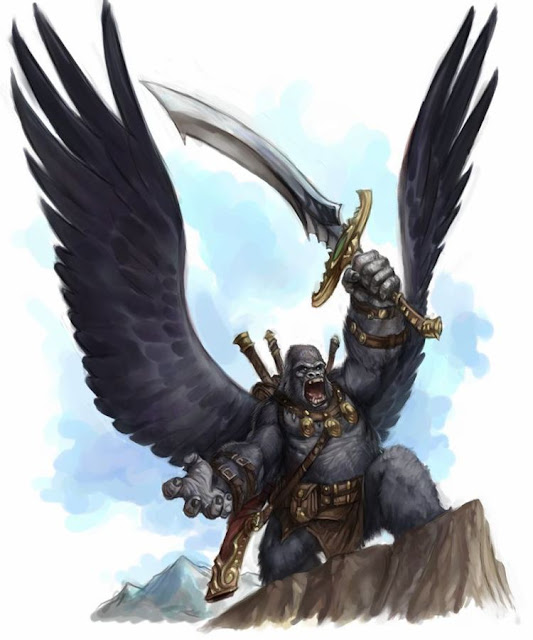 So when a break of three or four went on the second lap, I wanted in. They definitely were not waiting around, so I did the worst tactical attack from 25th wheel I think I've ever done. Inexplicably, no one followed my attack and I bridged up to the group alone. For the next 55ish minutes, we were getting time gaps anywhere from 15 to 35 seconds. Soon, some GC riders bridged up, started attacking, and the break split. Then, to no one's surprise, Jamis HB brought the break back in plenty of time for JJ Haedo to hit the watt bag and do winning.
Just like that SDSR was done. As a team, we were not fully content with how we rode, but there were some good moments mixed in as well. That first bigger race of the season is always shocking, but with great support from our sponsors and staff, all we as riders had to worry about was the pedaling. I'm confident that we will be swinging pretty hard over the next couple of races and I'm excited to throw down with the guys. And finally win a game of Settlers of Catan.


We're getting ready for The Redlands Bicycle Classic now. Stay tuned for more reports, and if you all are lucky, more videos of Doug exercising.
Tweet
Posted by Ian Crane at 8:43 AM