I seem to have forgotten about February

Did it happen? If I didn't post, I'm led to believe that it never existed. And if it never existed, then that's probably fine because February is quite possibly the most boring month of the year. Besides August. November is fairly lame also.

Talking seriously, hunger and war are large problems in this world. Talking less seriously, I've been kept occupied by some of my commitments. These include, but are not limited to: 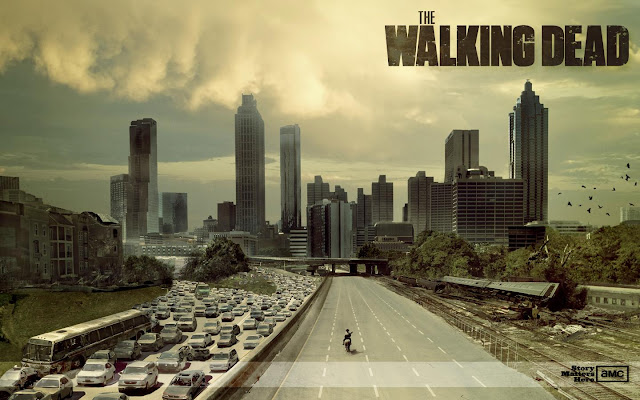 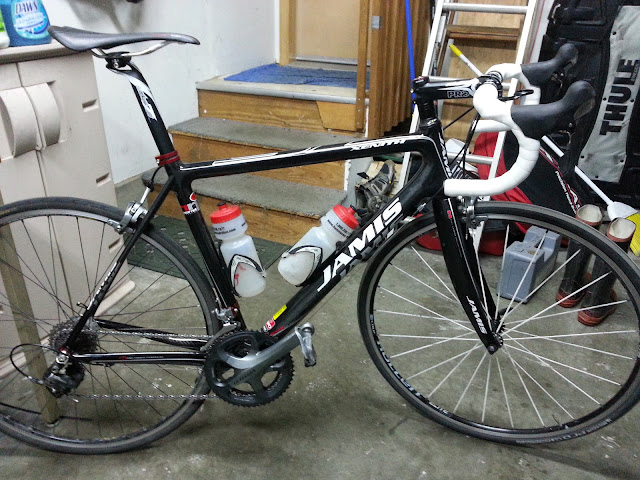 Ok, so transitioned from bikes to life to school to food and then back to bikes. Perfect.

Last SaturSunday I got to pedal bikes in competition, which is fun. The weekend consisted of my normal season start: Icebreaker TT on Saturday and Mason Lake road race on Sunday. For those of you who either A: know me well B: have a great memory or C: stalk my year old blog posts (http://craneimal.blogspot.com/2012/03/consistency-breeds-success-right.html), you'll know that I have a bit of a curse with the IceMason double. If you didn't fit into any of those above options, I ask you, why not?

Let's start with the tremendous news first. I am NO LONGER CURSED! That's right folks, I broke the 3rd 3rd disease. I'm not sure it was a fair trade, I moved up in the TT and heavily lost in the road race. Like, 40th or something. But I still beat Lang.

The good news is that the sensations were pleasant and I have not forgotten how to pedal hard while being weighed down by a couple of safety pins. Let's start with the TT.

Again, let me stress that I've never felt comfortable in aero bars before. My old TT bike was too small, with non-adjustable bars. So I just dealt with it. My arms, shoulders, and back would beg me to get out of the aero bars approximately 2.5 minutes into a time trial. Not awesome. This 20 minute TT on my new Jamis Xenith T2 went by so fast because I was not spending the whole time thinking about how much my shoulders hurt. Instead, I got to focus on making my legs hurt MORE. 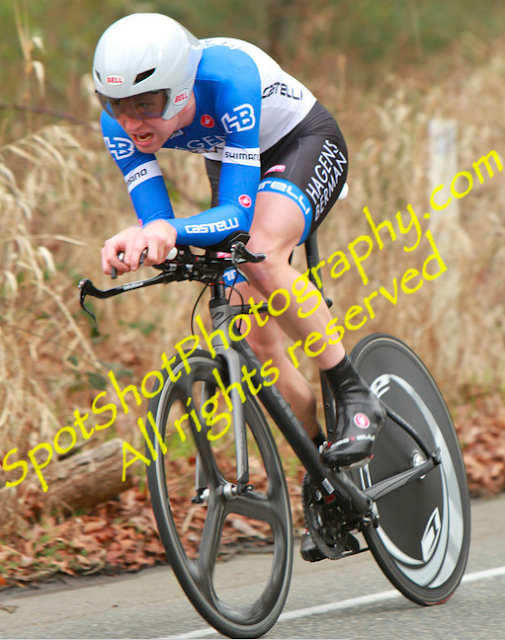 Unfortunately, Colby (my teammate) managed to make himself hurt just a teeny bit more, beating me for the win by one second. This is ok though, because he is my teammate. Let's chat about Colby for only a second, because that's how much he beat me by. He is from Vancouver (the one that's not in Canada) which means many things. I'm going to ignore them all, and instead focus on how he suffers from Svein Tuft syndrome. This means that Colby has the largest rib cage ever. His torso is like a keg (of rootbeer, he's not 21), or even a boxing bag. Medically, that is a sure sign that his lungs are approximately 14 times the size of the average human, and 8 times the size of the lung of an ox. It's the sure sign of TT greatness, I mean, look at Svein. Colby is undefeated this year in TT's, and it will be exciting to see what he can do on the National level. In order to make that only be a second, you have to read it really, really, infomercial fast.

Moving on to Sunday, I drove to the race with Lang and Rhae. Meanwhile, Colin passed us on the freeway going much too fast. He did not get a ticket, and instead this was an extreme foreshadowing of what would come in the closing kilometers of the bike pedaling contest.

In the bicycle race, I decided that riding in the peleton is for sissies. Luckily, it seemed that other people also had that idea. In an incredible sequence of events, the first attack in the first kilometer of the first road race of the year led to the first breakaway of the season.

About one minute and thirty seconds in the race, I pulled through after a Brian Hitchcock attack and saw that it was just him, myself, and Logan Owen with a gap on the field. Since we're all apparently interested in causing ourselves great amount of pain, we all agreed that we were committed and were looking at a long, 72 mile day off the front. Normally this does not seem like a smart game plan- Three verses the world. Kind of like how there are three people who like those Kombucha drinks with the floating chia seeds in the world, but they are so motivated and so down with the seed-filled jelly that they keep the company in business. Get it? I'm saying that our breakaway was similar to a drink that not many people like but is kept in stock because of the desires of those three people. Ok, it makes sense, seriously. Just trust me. Where I was going with that was : Basically, if I had to choose two people to go off the front all day with, Hitch and Logan fit that role nicely.

One hour later, we got caught, which was sad, but I think that the photographer in the trunk of the lead car was getting bored of just seeing us . 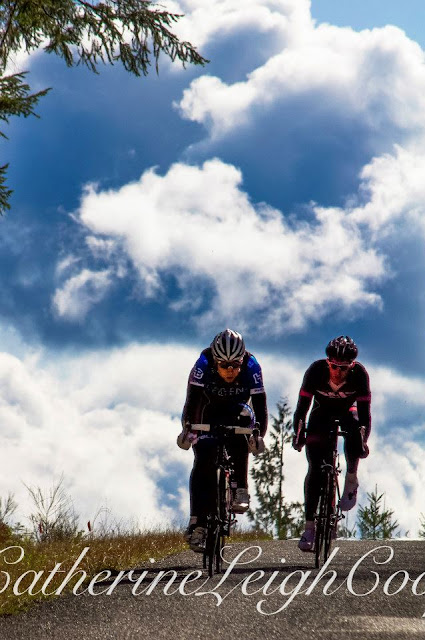 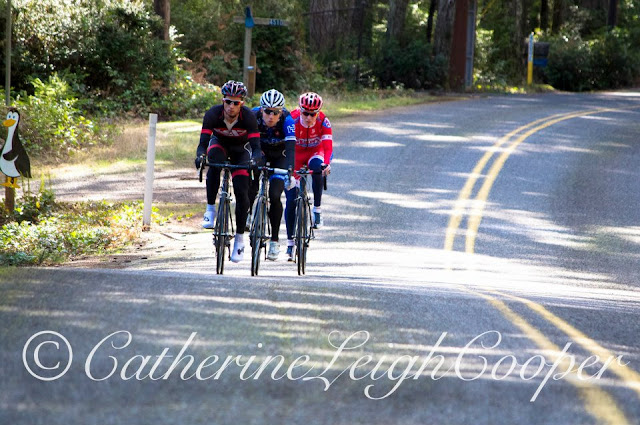 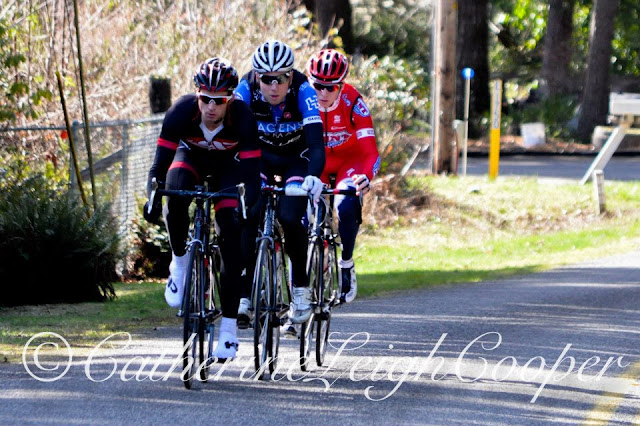 We got caught, the word from some people in the group was that it was apparently due in part to a spirited chase from Oregon (the whole State) and some other odd chasing that brought the group closer to us up the road.

Then, I let myself chill in the peleton. For about 30 seconds before both Hitch and I were in the next move. However, Mason Lake Uno made people really excited, so everyone pedaled hard and made sure it was a bunch sprint. I spent the remainder of the day riding the front and attacking, seemingly forgetting about #tactics and instead focusing on making myself incredibly f**ked the next day (funked* of course). 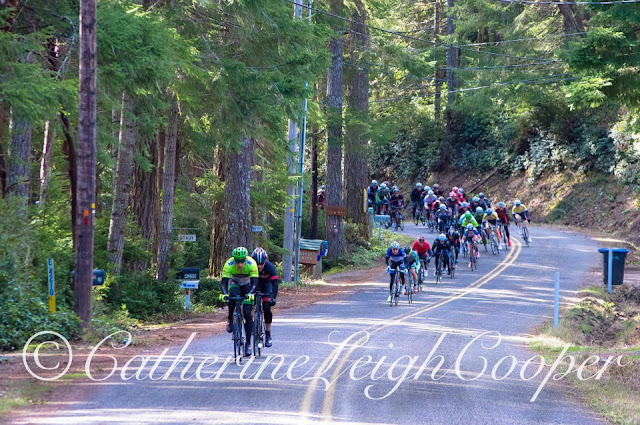 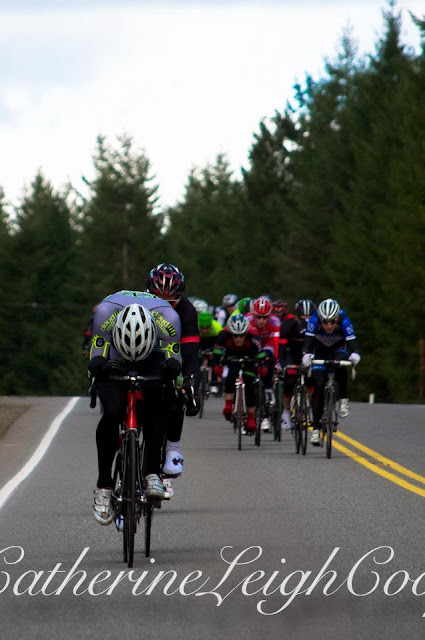 Then, I forgot that I had pedaled too hard for too long. I had this moment where every bone and orifice of my body said "attack! And then let's stop for burritos!" so I listened to it. However, this message from deep inside me came out at about the three k to go point, which anyone who watches bike racing on TV knows never works. So I attacked, and as I was settling into pedaling hard for the rest of the race mode, I realized that there was some strange feeling of discomfort in the lower half of my body and some fascinating urge to pull over and take a nap. This turned my 3k to go winning attack into basically a reallllly drawn out lead out for everyone else. Colin, trying to redefine what exactly it means when you use the hashtag #colinmove, countered me at about 1.5 k to go, going around 14mph faster than I was going. My brain told me that I should follow that move, because it was a good'un, but the whole rest of my body went into revolt at that idea. I stood up to accelerate, but instead lost about one minute in the last K. Yay Colin!

So instead of 3rd and 3rd I got 2nd and maybe 42nd. More importantly, the legs got turning and I was able to take off my vest and ride with a jersey. Summer in Shelton.

Bike racing is the bees knees. 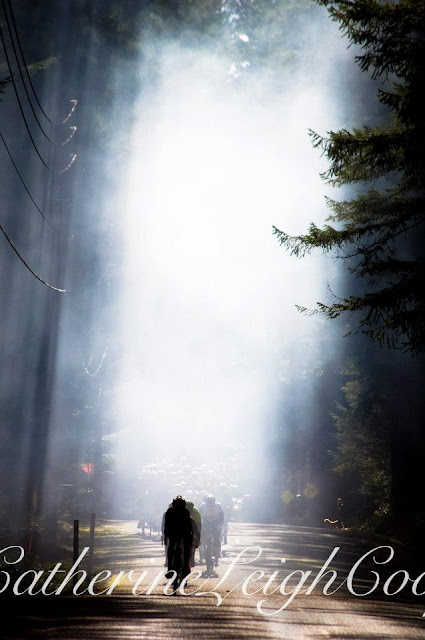