How Could I Forget?

I am seriously ridiculous. I forgot to talk about three great moments in the history of Hagens Berman 2011 and since I know that all of y'all are missing the adventures of my teammates (the actual interesting people on this blog) I decided I would share three more bite size morsels of excellence. I've already introduced you to the characters here. This mini-novella will feature Cody, Dan-Land, and Kennett. Awwww I'm so sad I miss my friends :( :(.

Daniel ____ Bechtold: hero, innovator, and legend. Dan-land knows how to travel. Like when none of us knew if he was racing Univest and I stumbledupon (not the website, Spencer) him in an airport bathroom. In Pennsylvania. I guess he was racing! But that is not the bite size tidbit that will keep you occupied until we begin our madness again in March.

Flash back in time, yet flash forward this story to the ending. Where we convene in some airport that we all had different connecting flights to and Dan is joyfully explaining to us how he JUST about missed his connecting flight out of Denver. They had to re-open the doors of the gate for him and everything! How did this happen? In the Denver Airport, Dan-Land discovered a special area. This area was a separate level, one that was quieter, calmer, and more serene than the first floor. Dan knew what had to be done. A nap was in order. It's ok though, don't fret readers- he remembered to set his alarm. Phew! In fact, how do you get the most out of layover nap time? You sleep for as long as possible. For Dan, that meant you set your alarm for 5 minutes before the plane... departs. Snoozin! Cheers to the innovation! 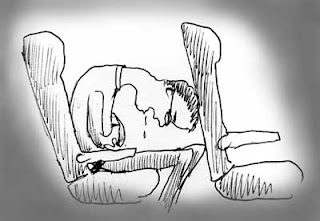 Morsel Deux ~~~~~~~~~~>
Let us continue on the journey that is traveling.  Cody J Campbell is the protagonist. I am not a gambling man, but if I haddddd to be, I'd say we were in the Chicago Airport. If I remember correctly, this is the airport where we saw the man with the tail. Lion King! Cody was sooooo hungry, that boy needed some SNACKS. We are lined up, as per SWA boarding procedures, and notice that our lone Canadian has gone missing. Big trouble in little paradise! We board and giggle about how Cody is missing that precious B17 boarding spot. All of us end up sitting in a similar location, and as the minutes tick by and the seconds climb higher than everytime Kennett gets on the scale, we start to get worried. Where is our Canadian friend? Had he snuck on the plane without us seeing? Was he deported? Did he lose his passport that he always keeps around his neck? The flight attendant gets on the speakers "Is passenger Cody Campbell here? Hello, does anyone know Cody Campbell?" We cheer from the back of the plane. She comes back to us, and asks if we've seen him. "Yes, just recently!!" "Well can you call him?" And then we simultaneously laugh about the his Canadian cell phone. With just minutes to take off Cody rushes on board with a gleeful smile on his face that could only mean one thing.

He got some snacks.

Morsel III >>>>>>>>>>>>>>
Traveling has happened, now we are at some bike race. Kennett Tabernackle Peterson is your vicious beast on this one. It's funny, because Blogger thought I meant to write that Kennett is viscous. Which is giggle worthy. Get yer giggles in. We were doing this bike stage race tournament in Bend, Oregon. It hurt a lot, and we all were racing for the elusive 150th GC spot, which would be the last person allowed to enter the crit the following day. Logan ended up being Lantern Rouge, because he's only 16. The tricky situation about this is we literally had no idea what was going to happen with time gaps, people in front of us, etc. So the stage before the crit was very important. The final climb of the day is a really uncomfortable drag up to Mt Bachelor, and after 3+ hours of racing the 20 minute climb is a P.O.S. We all knew we had to go as hard as we could on this climb because just like when you're sleeping in an airport, every second counts. Everyone knows that the most important part of bike racing is beating your teammates, and when Kennett hit the base of the climb and powered away from me there was nothing I could do. His huge muscles are quite beneficial for those climbs of 7 minutes in duration, but around the 8th minute my group caught up to his and went right by. Booyah! Basically that meant I could coast in because I was going to beat Kennett. As our group rounded a bend (in Bend) I heard the sound of a dying pickup truck being attacked by a catfish with pneumonia. The unmistakeable Kennett Peterson suffer sound. I had to attack. I kicked once, and I heard from a couple pedal strokes behind me a slightly louder noise, this time sprinkled with a small noisy taste of Cat-Fight. The gasping and heaving got closer, louder, and more vibrant as the mountain continued. The beauty and serenity of the wildflowers, mountain goats, and the Illegal Feed Zone were shadowed by the sound that a frog would make if you forced it to play saxophone when it was drunk. I didn't dare look around. I attacked again. The noise followed me. It haunted my future dreams. It finished with me.

Some say if you attack a man hard enough, you can hear his true soul. For this reason I am thankful that Kennett Tabernackle Peterson is my teammate, because I am scared to death of his true soul. 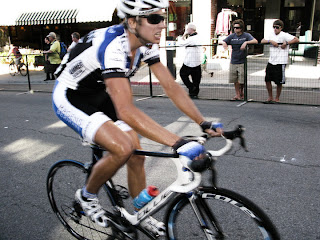 Thank you very much for your time and have a fantastic day.
Love,