First of all, I just wanted to ask how you are doing? What's new? Any new stresses at work or at home with your Xbox-live account? Are you managing? How are your New Years resolutions coming along? I sincerely hope that everything is swell on your side.

That's better. I feel like blogs are too one-sided and often forget to take into account the most valuable asset to the success of the blog- the reader. What if I wrote a blog that was making jokes about the mating habits of South American poison dart frogs (which I'm sure are joke worthy) but I didn't know that ALL of my readers on that given day were activists against unprotected poison dart frog mating and didn't find humor (or humour, because I KNOW that there are some Canadians who read here) in the jokes that I presented?

That would be terrible. So if anyone has any gripes or stories to share that would positively influence the mood on this site, please share! 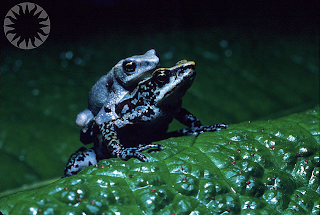 Continuing on, school is terrible. Luckily I was able to teach Aristotle a lesson when I compared him to Malcolm X to Woody from Toy Story in a presentation. I'm not going to elaborate on that because there is no reason to because all you need to know is that my favorite character in Toy Story (one) is Rex. He is such a good friend- it is heartwarming.  If they were to create a movie with Rex from Toy Story as the Protagonist, I don't think that it would be very successful because Americans HATE seeing a dinosaur as a good guy. I would watch it though, and try and learn as much as I could about how to deal with having short arms, because I think that is a problem I suffer from. 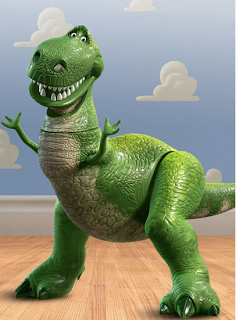 So besides training, I've got to keep busy somehow. Here's my recent top three (besides homework and studying of course)


1) TV Shows
I invested in a Netflix subscription and ooooh my has it been paying off nicely. We don't have cable so I've been doing a lot of catching up on shows that were SO HUGE a couple years ago but just blew right past my head like anything over 5'3" does for Steve. I like TV shows better than movies because then I don't have to commit a full 1.5-2 hours for a movie, and then feel like a dirtbag for spending that much time watching something. So instead if I watch 3-4 TV episodes, I don't feel as bad about myself! Here is my recent list of what I've been watching- luckily I am so far behind that I'm not going to run out of new-to-me episodes anytime soon.

"Wow that is a shocking list. Ian you have such good taste, and quite the variety of selections also!  May I come sip tea* and watch something with you?"
- Probably what you're thinking right now

Now that I typed it out I'm a little concerned because that is a lot of shows. I swear I do other things.

* I recently .... picked up... a small tea obsession. And whoa did you know how awesome tea is?

Did you know that if you read for pleasure it's more fun than reading for school? Yeah, really! And oh boy I have a small problem that involves 7 books that I am currently in the midst of. PLUS 9 more waiting to be read during the traveling season. Hopefully those 9 last me through March.

The two that I am most consistently choosing to read are Operation Mincemeat and In the Pursuit of Excellence. Radically different, because one is essentially about not going 4 loko crazy when you compete and the other is about going 4 loko crazy with your ideas on how to win (a war). Both interesting and both potentially lifechanging, much like the Wu-Tang concert I went to last week.

Every once in awhile I love a chance to get all Ratatouille up in this motha'. I won't Kennettron it by breaking down the caloric intake so everyone feels bad about themselves but I'll say I really like vegetable soups. I also made a pretty awesome curry that tasted like it was imported from a place that curry is created regularly (my mom's kitchen).

The exciting news is that in one month I don't have to be bored anymore and I get to participate in the World Championships! At Mason Lake. And then I get to do lots of cool races, which I'll talk about more sometime in the next month when Fe-Bru-Ary gets boring and I want to share my race schedule. Which is awesome and everyone should be on their toes with excitement about. Like me! 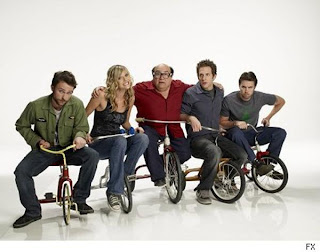 I've taken us on one large full circle.

Important- I've gotten into a habit of illegally poster-sizing without photographer consent through Costco in order to turn cool pictures from the internet into fantastic wall art for my bedroom. Case in point: 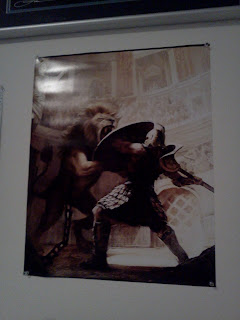 Pretty much my room is awesome. If there is any ever questions about photographer consent blah blah blah let's come to the agreement that it is pretty awesome that DBC photo DOT COM was able to get a press pass for Milan San Remo and snag a great shot of Matt Goss winning with Gilbert looking ROOSTED and Cancellara looking quite angry. Pipo Pozzato is also in the background but he is in the process of seducing an Italian woman off the side of the course so he isn't in focus. 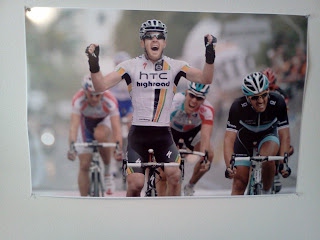 Moving on, long story shorter, Costco messed up the colors on my most recent print. Did it turn out better? I can't really decide. It's almost seizure inducing, but at the same time, somewhat bad-ass. Help! 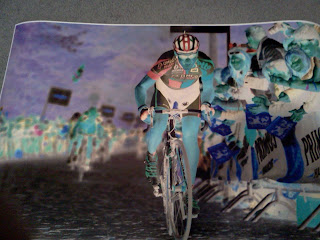 Thank you very much for reading and I hope that you have a wonderful day.Tweet
Posted by Ian Crane at 1:22 PM