A Summary of Recent Social Media

I know that you are all supremely busy. Way too busy to read Kennett's twice-weekly novels. Yeah, I understand. The problem with social media today is that it is becoming very spread out. Social media networks have expanded so much that catching every detail is more difficult than the training ride I did this weekend. So many KJs!! Let me tell you all about the numbers.

Instead, I have decided to make your life easy by offering up a social media site that compiles everything into a newsflash-a visual blink of your eyes, everything at your fingertips, cornucopia of information, holy shit exciting, source of social media.

Right here on my blog!

Craneimal.blogspot.com proudly presents.....
A summary of Social Media for riders from the Hagens Berman Cycling team*
*and Lang
Let us get started, shall we?

First, my dear friend Kennett created a holiday in order to make him feel better about the fact that I personally have been in caloric deficit for like, 4 months straight. Kennett need food (attention @everyone, that "grammatical" error was on purpose).
Yes, Kennett created himself a holiday based around over-consumption (oh wait, like all American holidays?). In summary, here are pictures taken from Kennettron 5000 that depict the day that Mr. Kennett Peterson lost the Mt. Washington hill climb TT. 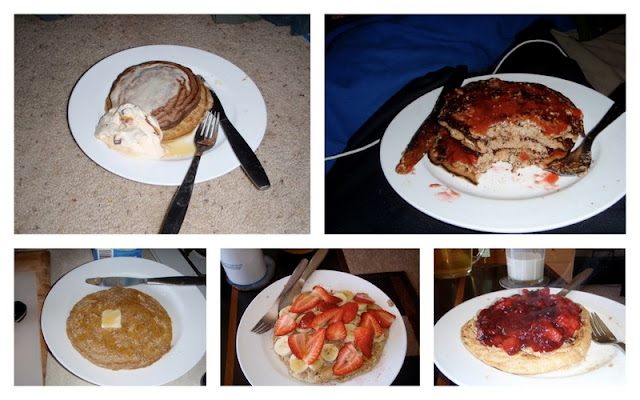 And that was only breakfast! You should've seen how he celebrated lunch, second breakfast, pre-dinner, and dinner.


Next, we summarize the Facebook.
I chose not to include the picture because I was morally disgusted with the act. This Canadian warrior did something questionable. My only hope is that Cody's Facebook page was hacked by his housemate Jacob, who after beating me in the best young rider competition at Tour de Delta probably gained some inner-knowledge of ways to confuse me. Then he kidnapped Cody, tied him down, took pictures of his legs, and posted them on the internet. That MUST be what happened.

Ok. Next. Lang has a fast girlfriend. Pretty much everytime I hear that they ride together or do a bicycle race in the same category I have to ask King-Lang if Rhae beat him.

This is especially exciting on TT days because Rhae is a bit of a freight train and Lang is still looking for that silver bullet. Lang generally comes out on top, but he'll argue that he ALWAYS comes out on top.

Then this picture appeared on the internet. 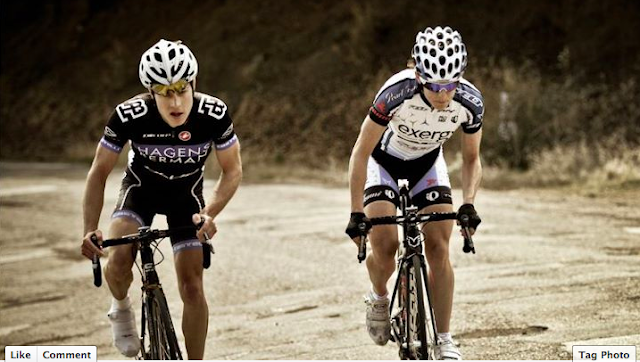 Lang perhaps might be tired from tri-weekly Strava KOM attempts, but as you can tell by the pre-ride preparation he was trying to get every advantage before taking to this race with Rhae. You may not have noticed the booties that Lang chose to wear, but upon closer glance you will see that he indeed has them, and they are white! Lang was searching for the extra 20 watts that everyone knows comes with wearing white shoe covers. Next, notice Lang's posture. The lack of symmetry in his out of the saddle acceleration suggests that perhaps he is not accelerating, but cracking under the stress of the hill and the pressure put down by Rhae's acceleration, which in contrast displays a perfectly symmetrical lower body power transfer to the bike. Continuing on, please note the position of our subjects sunglasses. Lang has chosen to remove his, opting to allow his sweat-streaked eyes to receive some form of breeze, where as Rhae keeps hers on- not allowing her prey to see into her eyes. Finally, please note the composure differences. Lang gasps for air through his wide open, slightly askewed mouth. Rhae nose breathes, her lips shut tight, as if the effort is nothing but a simple recovery ride in the sun.

PS- Lang drops me pretty much every time we go uphill.

The arguably newest and most simple method of social media is Twitter. For those of you unfamiliar, twitter allows for short statements with not much backing that allow the reader to draw their own conclusion.

First, let's look at how Colin Gibson uses twitter. Note his response (signified by the @ ) to Lang provides a certain amount of ... zing! Speaking of zings, Colin earned a reputation last weekend of being the first to very-excitingly respond to an email regarding a group ride and then cancel at the last minute for unclear reason. Sucka please.

That is a nice transition into looking at how Winger316 has been using twitter.

I'd like to elaborate. I really would, but I don't really know where to begin. Let's start with the obvious- 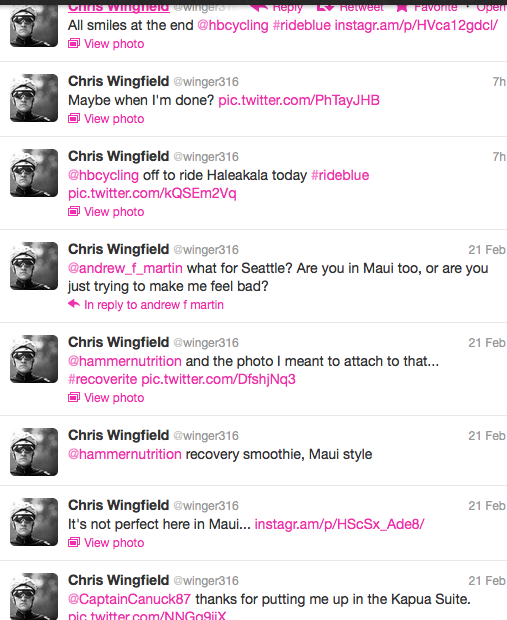 OMG REALLY? ARE YOU IN HAWAII?? News to me! Good thing @hbcycling is aware of it.

As you can see here, new teammate Jesse seems to have crashed on the ice in his homeland of really really Northern Canada. Well technically he wreaked havoc on the leg warmers- he must have forgot the word havoc. Since we are speaking "technically", he also is in California. Where it is warm.

The unfortunate situation here is that through social media he is proudly displaying early signs of Canadian Crit Driving Syndrome. Looks like team camp we will try to beat that out of him.

Speaking of "prison rules", David Fleischhauer encompasses his persona with one tweet. 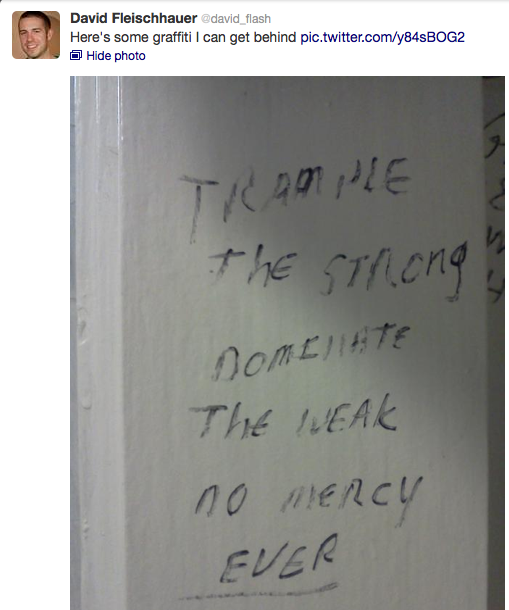 Next, lets witness how Steve uses social media to try and advertise an important moment in his life. Luckily for everyone in Bellingham, Steve's vanagon is gone from our driveway. Now a real car that works is in its place. Bravo. However, let us take a moment to analyze his steps for adulthood. Are those steps adult sized steps, or Steve sized steps? 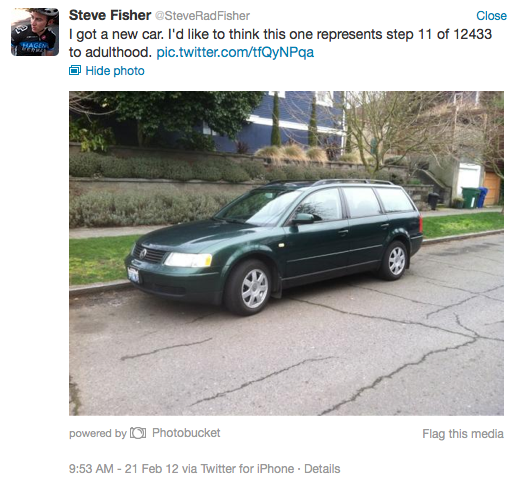 Surprising for Steve, this picture wasn't taken in a public restroom.

Last for now, new teammate Danny. I've only spent a total of ... 12 hours with him ever, so I'm not sure if my lack of understanding of his social media has anything to do with that, or with the more obvious fact. That Danny speaks in code. I will spend the whole season trying to break this code so I can decipher his twitter-tweets.

I FIGURED IT OUT! "Today I went for a ride and made good trainings".

twitter.com/iancraneTweet
Posted by Ian Crane at 9:08 AM