This is bad news. I just found out that we're going to go to Trader Joe's (round 3) right now, and that means that Kennettron will post before me. I get sad losing the blogging race.

Wait, never mind. We no longer have a ride to the grocery store. Can anyone help? Thx. I'ma break down today's race and the exciting events that occurred in or around DAMNIT we're going to Trader Joe's in Jon's car. BRB

Ok, I'm back. As an apology, here's this fun photo: 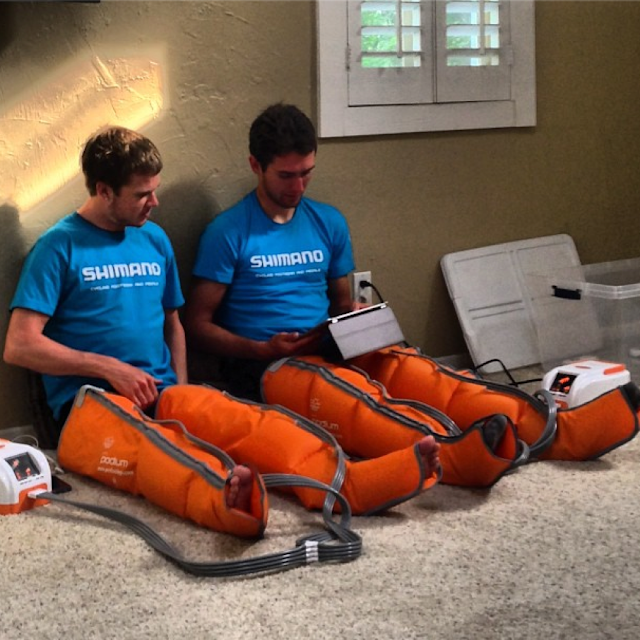 Now we've got all that madness out of the way, I'm sure you're interested in what I got at the store. I got: two apples, one box of cereal,  one San Pelly, one beet juice, and one rice pudding. Delicioso.

Today was a good day pedaling. Stage two of Redlands is a 120 mile road race with one uncomfortable climb and one really hard climb. It looks like this:

The race was pretty chill for the first couple of laps, and then things for some reason kept getting harder near the end of the day. Proof in heart rate form!

As you can see, I was trying pretty hard to ride easy-ish the first couple of laps. It is a long race (200km) and in the last couple of years I was always real tired by the last two laps up the KOM hill.  This year I wanted to make sure that did not happen.

Important to know: It was foul weather at the beginning of the day- heavy fog, light rain, and dark. As I put sunscreen on in the van before the race, Steve goes "ha! I'm going for the just get burned method if it gets nicer".

He got a sunburn, sucka! 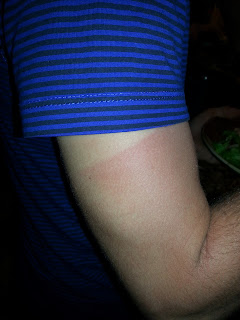 The guys were incredible all day. I had little to zero stress for the first three hours. In fact, by far the most stressful thing that happened to me in the first while of the race was when I was riding behind Kennett. I'm not referring to dangerous riding. You see, Kennett has this habit of just deciding to pee while riding. That's pretty normal in bike racing... except everyone but Kennett pulls to the side of the group and pees off the bike. Kennett tends to just pee himself, shorts and all. Then the stream goes where it needs too. Unfortunately for whoever rides behind Kennett, this usually means it will go on them. This caused me great amounts of stress because while I was riding behind Kennett, I noticed that several other racers were taking a pee break. I was tremendously worried this would lead to Kennett doing the same, so I immediately passed him and made sure that he did not Hagens-Chop me into the next corner.

Hornbeck got his swerve on and made one of the significant days of the break. Wow, I just wrote that. I meant breaks of the day. This was optimal for me, because it meant that I could sit 12th wheel and just chill playing the teammate up the road card.

Things were extra special the last two laps up the KOM climb.

Shoot, now we're leaving for dinner. Maybe I'll finish this later.  Maybe by then there will be some photos or something.

Here I am again. I've returned, for you!

Just had to re-read where I was going. I said "Things were extra special the last two laps up the KOM climb".


With two laps to go I went really hard. Mind boggling hard. As in I was the LAST guy to make the front split of around 12 over the KOM, struggling to hold onto Kennett's wheel. I did, and nothing came out of it. Steve brought me a bottle, moved me into position, hand slung me onto Jon's wheel, and then Jon towed me into the base of the climb on the last lap. Then we both rode as hard as we could up the climb and both barely made the split of nine that went over the top.

This was really exciting. We had two guys in the front split of 9 with maybe 10k to go. I told Jon to ride as hard as he could until he was dropped. I was confident that if we stayed away, I could do well in the sprint, and I needed Jon to get us to the line with me being as fresh as possible. He was taking some massive pulls, but unfortunately we got caught by a group of 25 with around 2k to go. There was a group of 4 dangling 10 seconds ahead of us the whole time.

Things got very hectic with maybe 500 meters to go and I had to brake, which was not optimal. I lost a couple spots and went into the last corner maybe 8th or 9th wheel, and started my sprint early. I came around a couple guys and ended 10th on the day (6th in the group).


I'm definitely content after today, but very hungry for more.