Days 2 and 3 of camp have gone by pretty quickly. I guess time and day of week are pretty irrelevant when the only obligations have been riding, hanging out with teammates, and drinking coffee. But I do know that today is Tuesday and in a couple of hours we are doing our big ride of camp- I've heard that 2 canyons are in the ride loop, which means at least an hour of climbing.

The last two days have been somewhat eventful- We've done a race, experienced "extremely abnormal weather", and even went to a Trader Joes and a Do It Center.

Upon arrival in CA, we were all disappointed to see on our Iphones, Palm pilots and sundials that there was foul weather on its way, but perhaps were fooled a bit when we rode on Saturday and it was moderately warm outside.Waking up on Sunday brought the truth, and just like A Few Good Men, I had trouble handling it.


The wind and rain was incredibly powerful, and it turns out that houses here aren't very prepared for rain. Windows were leaking in the main house, and all the walls and windows in the poolhouse became water soluble.
But luckily enough most of us live in the Seattle area, and if not have done some sort of hardening-up activity, so we were prepared for this madness. And what better of way to enjoy the torrential rain then doing a 7 corner criterium? The race was in Ontario which in the perfect world is 1.5 hours from our housing. Unfortunately CA+CA Residents+Rain+Driving+other factors make driving pretty miserable. Luckily Chris Wingfield is good at driving when the windshield wipers stop working in a downpour on the highway and got us to an exit safely to fix the wipers and then continue our drive. 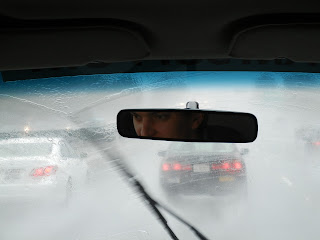 We all felt pretty at home in the rainy and slippery crit, and the 8 of us that raced all played a pretty significant role. We got 3 guys in the break, won 4 premes (including some SoCal series points! Phil sprinted hardddd for that), and we came away with enough prize money to buy Lebanese food for us all, plus coffees on a ride! Pretty successful venture.
The next morning we had a friend of Joes come over to share some of his experience in the professional peleton. Ivan Dominguez is one of the most successful US based sprinters of all time, with stage wins at the Tour of California, Tour of Georgia and the Tour of Missouri, and hundreds of other races across the states. At one point Ivan said "at this point of the season I won everything, 16, 17 races at a time". I think that I got more out of this talk as my teammates, considering I am trying to be the sprinter. It was pretty cool to hear about some of Ivans experiences and advice for us. Moral of the story- Don't be "that guy".

We went for a ride where Dan and Kennett promptly crushed me in the KOM, but I think I won the real battle, which was when I handslung my way off the front.


After riding, Kennett, Steve, and myself went on a really adventurous and manly hike. That is all. Then I ate barbecued chicken and 4 cookies.