I had a visitor today. Hadn't seen my sister Tela since Christmas, and since she is a Long Beach person now she was able to to drive over to Redlands to visit me. We did lots of very very fun things but unfortunately the camera captured none of those. We did play Uno for quite some time and based on these next two pictures, tell me who did most of the winning- 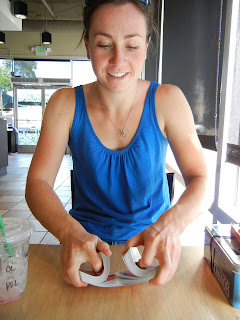 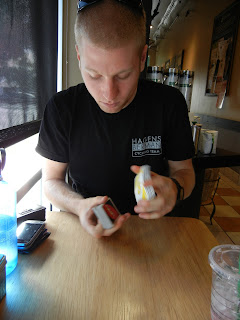 I won't even tell. I will say that I won two games, but I will not say how many games we played. Use your imagination.

The past two days have been pretty nice, just hanging out in Redlands and riding on the courses that we will be racing the next 4 days. On Monday, Kennett, Dan and myself rode the Beaumont circuit race course.
The time trial course is pretty tough. There is significant amounts of steep, steep climbing. It has been helping me to break the course into sections, and basically there are 4 significant climbs with a bit of recovery in between each.
In between rides, I have been soaking the legs in our hosts pool. They say that it is way to cold for using, but it has been quite refreshing and good for the recovery. The only downside is that their "brilliant" dog loves swimming in the pool...
The Sunset loop circuit race is crazy! 80 percent of the race is through neighborhoods. I went out early this morning to ride it, and my teammates like to ride in the "heat of the day", so I was flying solo. Having no experience on this course, I thought I could just look at the map and be fine. Wrong! After comparing the course map given by the race, to the map on the google machine,  I started to take notes so I wouldn't get lost. It took me two laps of the course before I was able to ride it uninterrupted by wrong turns. It will be a really hard race, with positioning being just as difficult, if not more difficult then the terrain.

TT is tomorrow. Good thing I have my go-fast Juice.

As a side note, there are 207 men on the start list for this race!Tweet
Posted by Ian Crane at 9:15 PM