But really, yesterday I witnessed something from the future. Maybe 1 mile from our host house in Agoura Hills is Malibou Lake.
Every day we have ridden past organized Chaos on the main road- This chaos stemmed from RVs, People, Vans, Police Officers (real and fake), and other madness. The reason for this? There is a TV show filming an episode (that is the future part) and every time we rode past we'd witness television future in the making. The show: Criminal Minds on CBS.  One day Cody and I noticed a ramp leading into the lake, and a jeep looking like it was being prepared for launch. The next day, Joe got held up waiting for a scene to be shot, and somehow ended up giving his business card to the guy. 1 hour later, Joe got a text from an unknown number saying "Stunt happens now. Come down".

There is not much else to say that pictures and videos won't say better, but I will say that Joe was a giddy little school girl when we were down at the set. Apparently, Criminal Minds is THE ONLY show that Joe watches on the television, so he was recognizing all the actors and tweeting 5 times in 20 minutes about it.


And finally, the stunt. We learned that the car used was stripped of everything for environmental reasons, and it was towed for a very short distance by a cable connected to another truck. There was a stunt driver and a male dummy with a blonde wig in the passenger seat.


Today is our last morning in the Hills. This afternoon we head towards San Dimas, where we have 3 separate host houses. It begins tomorrow with a 6 k uphill time trial.

Now to channel one of the props on the Criminal Minds set. 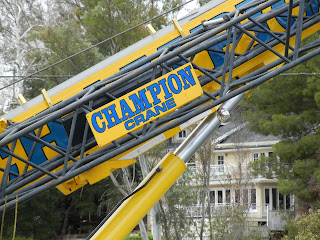