We are in Agoura Hills, California, for Hagens Berman team camp, followed by the San Dimas Stage Race and finally the Redlands Bicycle Classic.
I started this blog because I got a camera for Christmas, and was told that either I add my parents as friends on the Facebook so they can see the pictures I take, or find some other method of picture sharing. So I introduce you to .... the blog.

I am a bike racer so if you're really lucky, I'll include lots of really specific boring race reports and nutrition advice and also about how I really didn't get up the final climb quick enough because my housemates ate gluten for breakfast and I was tired because Chris Wingfield left his shoes here and I had to bring them to him or even because it is raining and windy here, and I have never ridden in the rain before.

Joe and I flew Virgin America to get down here, and the pink neon lights and the touch screen tvs were a nice touch. An even nicer touch was when a flight attendant got on the mic as we were getting ready to take off and told us about how we were only the second flight ever on this brand new, still new smelling plane, "so don't ruin it". As he said that, the power promptly shut off and the plane went dead. After a delay and a reboot, we were in the air. Luckily the power didn't go off while flying.

Enough of that madness. We are staying at a friend of Joe Holmes, near Malibou lake, and overlooking Malibou Creek State park. I've been really nailing the local trivia. If this looks familiar

It is because you have watched the original Planet of the Apes movie, and Ape Village was filmed in our hosts backyard. Gangsta!
Another Jeopardy question- "M.A.S.H. was filmed here". Answer- Malibou Creek State Park, in our backyard. Booyah Alan Alda!

Enough Triva, check out how rough our life will be for the next week or so 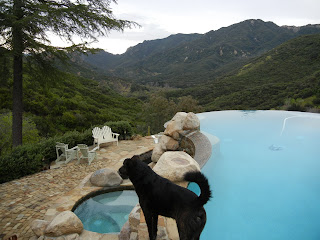 One of our host dogs Trek. I assume if you look closely into the Park you can see Charlton Heston and Alan Alda getting into a sword fight, but that has yet to be confirmed. 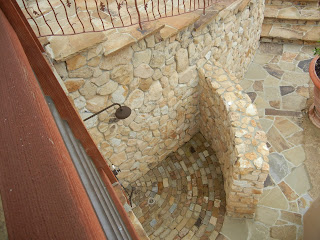 We really are doing more besides just sitting in lawn chairs overlooking the pool and the park, but Phil and I maybe did that for 3 hours or so yesterday. I did lots of scheming involving Ziplines and tree houses, and when I asked Karen (our host) the possibility of doing that, I was informed that they had a zip line at one time!!! But unfortunately (or maybe fortunately) for us, a.... "slightly overweight" friend of theirs straight up snapped the cable on a rowdy evening and that was the end of the line.

We did go on a pretty great ride. It was cold enough to warrant leg warmers, arm warmers, and a vest, and I made it my goal to go easy enough so I would not get warm enough to remove these items. That worked really great until about 5 miles into the 7 mile Mulholland drive climb, when the vest came off, the arms pulled down, and the jersey unzipped. 60 degrees is warmmmmmm. Mulholland drive maybe sounds familiar to fans of Naomi Watts  (More trivia! http://www.imdb.com/title/tt0166924/) or fans of the Amgen Tour of California. This climb and proceeding descent were used in the final stage of the Tour last year. Pretty much immediately after finishing the ride (and while drinking my Hammer Nutrition Recoverite and compressing with my Defeet Compressor socks) I got onto the youtube machine and found the video of the stage. Watch this descent!!!!


Finally, my room is really horrible and my bed location is even worse. I really don't like waking up staring directly into paradise. 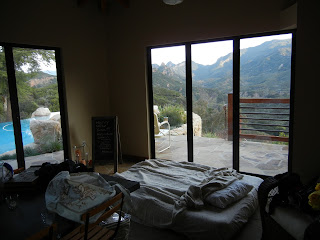 "But give me that bomb beat from Dre
Let me serenade the streets of L.A.
From Oakland to Sacktown
The Bay Area and back down
Cali is where they put they mack down"
-PacTweet
Posted by Ian Crane at 8:20 AM