I'm going to share some exciting things first to convince you to read the whole saga. Exciting moment one, I hip-checked a pickup truck at 25 mph. Exciting moment # 2, I had good sensations in the leg region. Exciting moment tres- the fireworks from the Jeep Show finally stopped. THANK GOODNESS.

The eating has happened, and we've enjoyed it. Besides the farm grown Kale and Chard that was part of dinner last night, we've had the chance to try some Amish food. What type of Amish food? I know you're dying to know. Apparently people here eat things called Funny Cakes and Shoo-fly pies. And fortunately (or maybe unfortunately?) we've been able to sample these goodies. I am way more of a fan of the the Shoo-fly, which is kind of like a coffee cake. Sort of. Actually it's nothing like a coffee cake. Funny Cakes are so hilllarrriooous because they have chocolate in them. At the bottom. But when they are made, the chocolate is on top! And when it's baked, the chocolate sinks to the bottom as the dough rises around it. Chuckle chuckle!

Since Kennett already beat me in the blog writing race, I've been taking my time to get this written. I just had a bowl of cereal! And plus, I beat Kennett in the bike racing race today so SNAP!

Univest GP is one of the few one-day classic type races in the States. It's 100 miles long and has lots of short steep hills. We did 17 laps- 12 on the "long" loop and 5 on the shorter loop. The only thing that was different was that the long loop had like 4k of extra flat between the climbs. So the short loop made the climbs closer together, therefore making more pain appear in your legs.

EXCITING MOMENT NUMBER 1!!!!!! (Thanks for reading this far)

A little less then 1 lap into the race, we are ripping through town on these downhill corners. I had moved myself into the top ten as we were descending into a 90deg right hander. I thought that we were going ~35 but it was probably more like 34.8. We take the right hander and as we move to the apex of the vertex of the midway point of the corner, and just as I'm starting to drift towards the left side of the road, there was a parked car! OOPS! Surprise! So I grabbed a whole handful and then some of brakes and started the power sliding process. SMACK and ran into the truck with my hip and thigh. Then I bounced directly back into my line, my rear wheel skipped like if had just thrown some flat rocks into water and straightened it out and kept on riding. I felt like a hockey player that just survived a huge hit- maybe a lil woozie on their feet but I'm still standing!

Then I flatted my rear! My theory was that I power slid through the tire and popped the tube, but after scientific process I've determined that was not the case. Anyways, so far in the race I have ran into a car, flatted, and now am OTB! Sikkkk Whattttttt. Oh, and we have only been racing for like, uh 12 minutes. Not awesome. Luckily Joe was in the caravan with a Dodge Charger, which is perfect for illegally drafting my way back to the bike race. It took 60percent of a lap to get back into the race, but what was really fun about this scenario is that Joe was going equal speeds as I could go through these downhill corners. Which was so fast that he bottomed out the car twice, I heard metal scraping on several occasions, and tires squealed through 3 consecutive corners. Tokyo Drift! I was trying to not use very much energy, so I made sure to draft nice and close. So close that I ran into the bumper, 2x. Turns out there is no roller on cars. Sorry Dollar Rental!

This picture is a combination of me hitting the car side-on and me running into the bumper. But this is not a picture of either of those because Winger wasn't there with his camera.
Exciting part #2- Good Sensations.

It's been really nice to get a big block of training in during the end of August and beginning of September. I have been feeling really strong in training so I was hoping it would translate to good legs in a bike-cycle race. And it did! Today was definitely the strongest that I've felt all year. It's bittersweet, because this is also the last race weekend of the season. Hmmm, gonna crush some training rides pretty soon!

Anyways, I tried to stay near the front on all the climbs. I was worried that there would be a field split, and if there was, I wanted to be in it! By the end of the race, our 160+ rider field and turned into a front group of 41. I ended up 17th on the day. Turns out the downhill into uphill finish wasn't as exciting as I was hoping yesterday, and actually made it pretty hectic. Jostling for position at 50 mph is difficult! Of importance is that my jaw is really sore tonight. I must've been chomping down pretty hard on those climbs. Which means I was nose breathing....? Holla.

The team raced great. Kennett, Gabe, and myself made the front split, and team GC was determined by your first three guys. So we got fourth in Team GC! Which is a pretty good result for us at a race like this I think. Gabe also got 2nd in the KOM competition, which means just about nothing as far as prizes or rewards or ribbons go but it shows that he was there and crushing fools. 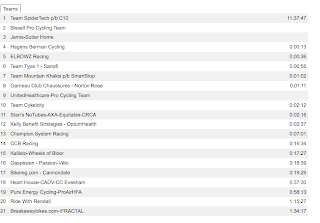 Props to Dan and Chris from coming back from their injuries and bringin the heat again. And since Parrish is back at it, I figured no one should forget this adorable photo from Utah last year. 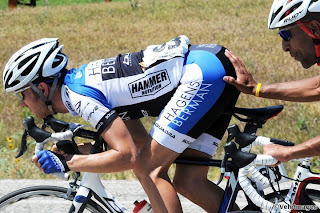 And exciting moment Tres! The picture of the inflatable Jeep I put up yesterday was the welcoming symbol for the Jeep Show about .5 miles from our house. It's really exciting, about 100 people with stock jeeps and 4 people with cool jeeps parked their cars in a big field and walked around looking at them. Then they had a huge firework show that we couldn't see, only hear. And it was loud and sounded like a war-zone. Then it stopped, and life got so much better.

Ok, I'm going to go sleep like a child, then do a crit tomorrow!Tweet
Posted by Ian Crane at 5:54 PM