Well the race season is OVER. Which sucks, because that means March-September summer vacation is over and it's back to the real world. I am really happy with this race weekend and was really stoked to pull out a result in Sunday's crit. This was a pretty motivational way to end the season!

After Saturday's Univest GP, I was pretty tired. In fact, Cody and I sat in the same room and did the equivalent of staring at a wall for I believe roughly 78 minutes. We found Dan-Land and then went to the Mayor's house for a party. Believe it, the Hagens Berman Domestic Elite Cycling Team invited over to the Mayor's house for a social gathering. 6 socially-awkward cyclists who just did a 100 mile race and were all sleepy. Ok the secret to this story is that Kennett, Chris, and Gabe's host parents were actually the Mayor and his wife. If I lived in Souderton, PA, I'd definitely vote for him.

And it wasn't just a small gathering, there were at least 45 people there, so we just sat on the couch and made small conversation about politics and the weather. John Eustice, the promotor of the race weekend, was at this event for awhile. We talked to him briefly and he wanted us to be sure that we knew that Sunday's crit was a real bike race, and not some Post-Tour celebratory parade "race". Well we couldn't let him down could we?

I'm not really sure what food I ate to be honest. I was hungry and there were snacks on snacks. I'm talking all the way to the back, no front stackin. I probably had some chicken, and some Vitamin Water, some cheeses and salads and chips and fruit and Reeses Pieces and some Chili and.... Not sure what else. We left and I tried to figure out what I had ACTUALLY eaten, because I didn't think I ate that much. But I was full, probably from looking at the food all night. So then I went back to our farm house and imagined myself eating some more food until I felt full again.

I got the joy of driving the van to the crit in Doylestown. This was quite exciting because we freestyled the directions, and got there successfully! First we had to drive on roads that made Dan-Land question "why don't they build roads between places?". Then Chris told me to take the NEXT LEFT no matter what, which I did, which led us into a Walmart parking lot. The silly circumstantial consequence of this is that the parking lot was harder to get out of then Dan trying to fit his bike box into a small circle shaped location. But we got there, and got G'd up and ready to go.

The field was a bit smaller then Saturday's race, with a couple teams heading home after chasing their NRC points. The course was in a cool area in downtown Doylestown that had a pretty big Art-walk-show-tables-with-art- and-crafts in the same area so there were bike race fans in attendance, as well as fans of beading and crocheting.

The course was 1.5 mile lap on a side hill, with ~8 corners. We were to do 36 laps. The first 1/2 of the course was a screaming downhill, then you gradually went up the last couple of corners, leading into a pretty uncomfortable 300m uphill finish section. The finish reminded me a lot of Collegiate Nats this season. The course seemed pretty hard during pre-ride. 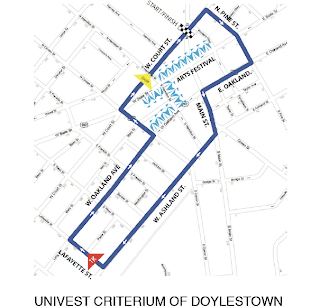 I signed one autograph before racing, dodged some liquid coming from Kennett's general direction (I'm pretty sure that it was water from his bottle, but with Kennett you can never be too careful), and spent some time scheming. Since the race was 50 miles, on a difficult course, I was expecting about a 2 hour crit. Which is really long! We ended up finishing in 1 hour and 53 minutes, which was the fastest finishing time in the history of the event.

The race started and I felt TERRIBLE! Almost as if I had done a wacky race the day before. For the first hour of the race, I was in the equivalent of Dan-Land. Didn't eat anything, and didn't touch my bottles. I wonder why my legs felt so bad??? After such a brutal effort the day before, and pretty poor nutrition the night before, I definitely should've been eating way more calories during the race then I normally do, and of course should've been eating more then, nothing.... So at about the hour point I started to piece together the root of my problems and drank my entire Coke bottle in 2 sips and pounded the one gel I brought with me. I think if I could've done things differently, I would've ate at least 3 gels during the race. And surprise! I started to feel better, almost instantly. And then a miracle happened! People crashed infront of me, and I was able to successfully not crush the guys head I was going for, and stay off the ground. I took a free lap, took a few deep breaths, and got thrown in about mid pack.

While I practiced Logan Owen nutrition tactics, a 4 guy breakaway had gotten up the road and gotten a significant lead. I had been hearing our team name announced nearly every lap by Dave Towle with statements such as "Hagens Berman is HUNGRY today" or "Hagens Berman is riding like they have something to prove" etc, etc etc. Gabe was being a bike racing thug, all the guys were being attentive, and I had done nothing so far. Not cool! I started to move up and noticed that Gabe was being very active in the chase efforts of the breakaway. I worked my way to the front, just as Gabe was taking a massive pull. With 12 laps to go, I counter-attacked his pull as hard as I could, took two corners, and went into chase mode. I got 1/2 way across the gap and started to fade, just as Tom Zirbel from Jamis counter-attacked me up the finish stretch. I dug as deep as I could to stay with the group as Zirbel single handily pulled us up to the breakaway. 8 of us made the bridge to the 4 leaders, and now I was in the 12 man leading breakaway!

Here is a video of the break with 5 laps to go.

There were 3 guys from Kelly Benefits, 3 guys from Jamis, and a handful of other guys. Because of the numbers from those teams, I was able to just rotate through and let them do most of the work. Our gap ballooned up to 45 seconds. With 2 laps to go a rider from Jamis attacked and Jesse Anthony from KBS bridged up to him. They would end up sprinting for the win, leaving the rest of us to sprint for 3rd and the final podium spot. At the end of the day, I got beat in the sprint for third place and ended up with fourth. I really like this type of finish, where it is not quite a pure sprinters sprint because of the hill. I was bummed to miss out on the podium, but quite pleased to get 4th place! 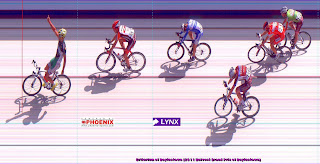 I have never been in a position to win a race of this caliber before. And I thought that crowds at local races could be loud cheering for a winning breakaway. But I cannot explain the energy that the crowd had coming up the finish hill the last couple laps of the race. To call it "deafening" doesn't really seem right, because when you are focused on the race everything else is background noise. It's hard to explain, but the crowd on Sunday was so loud that it felt quiet. If I had hair on my arms, it would've been standing up.

I was really glad to be able to deliver with a decent result after all the hard work that the guys, especially Gabe, had been doing earlier in the race. Now to figure out how to not let Jesse Anthony just ride away from me!