Joe Martin stage three. This one we did laps with some hills and some downhills. I'll be really honest here for a second, I wasn't so sure that I'd be able to start the stage because of my crashing incident yesterday. Road-rash wise I'm good, but not so good in the entire upper body region of my body. Here is a funny story about that.

Kennett broke a wheel in the crash that I was in. He didn't fall- he did this by running through the chaos and using his girth to stay upright. Flash back to me- I'm most hurt from someone running into me VERY hard. Rewind back to Kennett- "I hit SOMEONE reallllly hard. I think it was a Competitive Cyclist guy. They had a white jersey". I'm not one to point fingers. BUT KENNETT RAN INTO ME! In order to keep the peace within the team, I'm just going to assume that by hitting me, Kennett actually pushed me out of the way of a much worse, more extreme, deeper into my soul pain. So let's just role play this really quickly- Me, on the ground, spinning/sliding uncontrollably on my back. Kennett sees that there is a dinosaur and an alligator waiting and drooling with mouth opened fury directly in my path of slide. He only has one option. Run into me to push me away from this impending doom. So Kennett, thank you. Thank you for two things: 1) Saving me from dino-death 2) Proving that my core muscles are strong enough to CRUSH WHEEL WITH BODY!

OK, so on to stage three. Woke up in the morning unsure of my life. Rode to the other house, unsure of my life. Rode to the race, unsure. My plan was to try and survive, Bear Grylls style. The good news is that my legs felt fantastico. The contrasting bad news is that breathing, getting out of the saddle, twisting to get into my pockets, and my broken saddle were really troublesome. I discovered quite early in the race (about 2 minutes on the first climb) that my legs were great, it was just that... other stuff... So I knew that if I could just man up and deal with the upper body pain that I would be good to go in the leg department. Insert distraction strategies heeere-

1)  We rode through the town of Hogeye. I decided that a good way to distract myself from the stabbing pain in my chestal region was to decide on the reasoning behind that town's wonderful name. What occurred to give it that name? I was excited to spend long amounts of time having an inner monologue deciding, but one minute later I had decided that the first settler had a dear friend who was swine-ish. They were best of pals, did everything together. If hogs have manes (I'm not sure), this settler would braid the mane of his hog. Then one tragic day while fishing for bass and trout , the settler accidentally hooked the eye of his beloved while casting out his line and plop! Out goes the hog's eye. The settler cried for days, then buried the eye underneath the old oak tree in the soon to be town square. The end.

3)  Seeing just how hard I could clench my teeth together. In an unrelated side note, my jaw is really sore tonight. Turns out the harder you bite your mouth together, the less you think about your ever tightening right glute muscle.

4)  The last hour was mostly adrenaline. Race finishes are really fun, so if I survived the last hour then I had a chance to put together a sprint.

There were more, but I've already forgotten them because all my energy is going into digesting my food. Also, it's 11:37 right now and I am WIDE awake. My race today finished at 7:15 pm, and it was a 115 mile road race. This means in roughly 2 hours I will start yawning. I decided to compose this blog tonight, instead of tomorrow, because I have done zero school work this trip. Every morning, I sit down to read PDF files of things I don't care about in order to write papers and end up writing blogs instead. So new theory- if I write the blog TONIGHT, maybe I can watch Modern Family tomorrow morning. I mean do homework. Sorry teachers.

Back to the bike race. I survived the four laps and instead of turning right to go up the hill that made me hurt we turned left to ride the ~20 k back into town. This was chaos, so I tried to be patient and coast a lot for the first 15 k of that. Fast forward a couple K and I'm on the tail end of the FAST moving Kenda train and we are moving up the side. We get to the front with very little left to race and then the front of the race made a crash. Here we go again. For the second time in two days, I am power sliding trying not to fall, and fail to avoid it, crashing AGAIN. I was totally fine this time around, because Kennett wasn't there to run into me. But actually, I was good because some poor gentleman landed on the ground before me and he was MUCH softer than the pavement.

So chance at making a sprint foiled again. Someday.

"One of the most under-rated stages in NRC stage racing did not disappoint again in the men’s race where unfortunately a crash took down a big number of riders at the front with less than two kilometers to go. Reported down were riders from Bissell, Kenda/5Hour Energy and Hagens Berman" - Podiuminsight

Let's lighten the mood up a little bit. There is an important GC battle going on. Not the actual one, but the GC battles for the people who say nay to size 52 bike frames, and instead go for 60's and up. The ones who laugh in the face of 1500 watts, and shiver at the thought of 30 minute climbs. The guys who are EXACTLY who you want to follow when it's windy and probably don't choose to share a bed with when you have to pick roommates for a hotel room that requires bed sharing. Here is the leader board going into the last day.

GET HIM DAVID! BRING HOME THE BIGC

Well that was fun. It's almost tomorrow, yet still today, and I'm still wideeee awake. The good thing is that it's a LAPTOP PARTY!!!!! 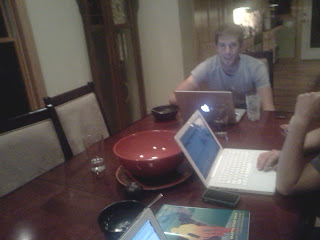 Catch all you friends of mine after I race a crit tomorrow.Tweet
Posted by Ian Crane at 8:34 AM