Tour of the Battenkill

"Cyclocross racers- You have a distinct advantage"- Richard Fries one minute before the start of Sundays Tour of the Battenkill. At that moment, Steve's head grew approximately 12 sizes, Joe cried from the caravan, and I cut my derailleur cables to best mimic my illustrious single speed cyclocross career.


David, Jesse, Gabe, Steve, Kennett and myself walked from Seattle to Albany, NY, for a one-day bicycle tournament called the Tour of the Battenkill which took place in Cambridge, New York. This race is the closest to a Belgian-style Northern Classic that happens in the American race scene, and this year it held UCI status. What this means is that lots of people came to do this bike race. The Belgian Classics (most notably Paris-Roubaix and the Tour of Flanders) are hardman races. They are long, the courses contain rough, cobbled sections and steep climbs, and the more "sturdy" riders do better than the lithe and anorexic members of the professional peleton. 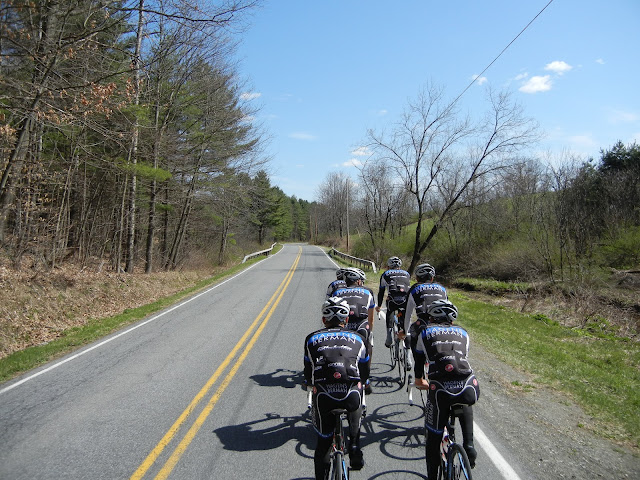 Crossing the Atlantic Ocean to Cambridge, Salem, Greenwich, and "other", The Tour of the Battenkill tries hard to give us wannabe Classic riders a chance to prove all those stereotypes wrong. This is why Steve and Gabe came along on this trip. The rest of us however fit in the "large" bike rider category, so we were out to prove the stereotypes about "sturdy" riders RIGHT. Although compared to races like Flanders and Roubaix, I think that this race is much more like the early season classic Strade Bianchi. Whereas cobbles are numerous throughout Roubaix and Flanders, America doesn't have any roads that are older than dirt. Instead, we race on that dirt. Strade Bianchi (white roads) takes place in Italy and is a monster of a race that climbs through these really great white-graveled roads, then back on pavement, then back onto the gravel. The Tour of the Battenkill mimics that excellently, except instead of Coliseum-White dust roads we got treated to dusty-dirt colored dusty dirt roads. Pretty much everyone over 130 pounds call the Classics their favorite races, whereas everyone under that weight threshold calls the Grand Tours theirs. Now we get to see what it's like to race a classic. 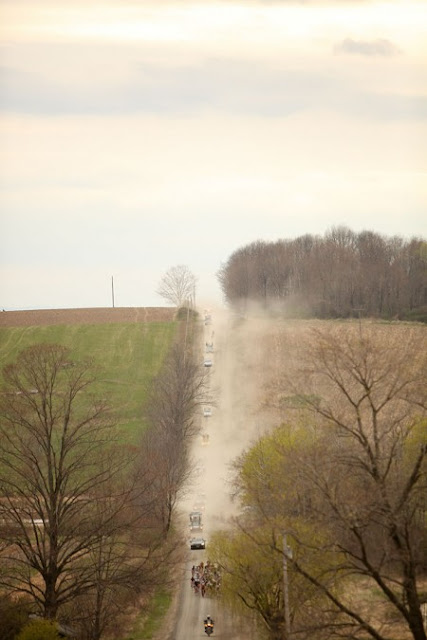 Our race was two laps of a 62 mile loop. This makes for my longest bike RIDE ever, let alone race. I was very confused about the race course: which sections were important, which weren't, where to feed, where to eat, etc. I knew two town names, and that is about all that I could figure out after riding sections of the course and staring at the map for about 15 hours the night before the race. I committed those towns to memory. BE IN THE FRONT HERE IAN. I packed an immense amount of food. Whoa, speaking of food, let me tell you about my pure concerns the night before/morning of the race.

How do I eat for this sure to be madness?!? I knew that I was going to burn A LOT of calories during the race so I had to eat lots.

My dinner:
-Penne noodles
-One huge chicken breast the size of a catchers mitt
-Salad
-One large bowl Greek yogurt and granola
-One medium bowl granola
-One bottle of San Pellegrino

Ok, well that was the most food that I've eaten in a very, very long time. Now I had extra motivation to finish this race, because I knew that if I didn't I was going to get FAT. Not phat, but fat.

Back to the race. Two towns, these are important. Everywhere else: Try and save energy; use my sort of rusty, sort of mediocre cross skills to not make a crash on the loose, rocky, and sandy descents; and ride at the front on the climbs. For the first 45 miles, I felt GREAT. The first significant climb I crested on Francisco Mancebo's wheel, with Phil Gaimon on my wheel. Oops, I forgot to mention that this climb was rocky and dirt, not a paved climb at the Tour of Gila. Maybe someday.

I fought my way to the front for the second town, and tried to be prepared for the next 4 gravel sections that came in a 1-2-3-4 punch with just a little bit of road recovery between each sector. 1 and 2 went well, but I went a little deep on 3. Section 4 came and I was not in good position, and because of this, I had to do something on a steep gravel climb that I never thought I would have to do in a road race. I got off my bike and ran. Ian Crane, running in road shoes. Now let's paint a picture here. When I run regularly (this is my number one most mispronounced word. I have no idea how to say this word, or even spell it. Someone please help me) which I don't, I look ridiculous. Now let's imagine a fairly fatigued Ian running in Shimano cleats on a very loose section of gravel, all while being kicked and ran into by ~14 of my newest close friends. Summary, I'm sure it was hilarious.

(If you feel like stopping reading now because you're embarrassed to know me, don't. I make up for it in about 70 miles)

Trouble. Sector 4 is the climbingest dirt section of the course- two steep climbs broken up by a fast dirt descent. I got gapped off while running and all of a sudden was in a group of maybe ten chasing our brains out. At the beginning of the race, we were told that if you were 5% down on the leaders after one lap, you would be pulled because you were losing. And if you were 5% down after 62 miles you were going to be in trouble after another 3 hours of racing. I can't be sure, but I heard that some brave souls said "F THE POLICE" aka the race officials and did a second lap anyways after they were pulled. Some to finish, some to eat dinner. I came through the first lap in my small group convinced that we were going to be pulled, but we did not.

I spent the next 30 miles in this group chasing, and chasing, and chasing. That's right, I took three pulls. Kidding, it was much longer than that. At one point, we got a time check that told us we were 4 minutes back from the front group, and the sails of our chase metaphorically deflated. Then, THE Joe Holmes dropped back from the front group to give me a feed, and told me "CRANE. WHY AREN'T YOU WINNING? THE FRONT GROUP IS ONLY 1:15 UP THE ROAD". PS, I used cap-locks because I don't know how to type the Joe Holmes voice. Picture caps lock with a undertone of italicized and a sprinkle of bolding and I think that might be the font type that is HolmesSpeak. At this exact moment, I drank an entire Coke bottle and felt like superman.

Our group saw the caravan, chased harder, and caught up to a pretty small (~30) front group. In this group: Steve and David. At this point, there were about 13 or so people up the road. This is when the race started going pretty well for us. The three of us rode together, stayed near the front, led into the gravel sections, and rode like a pretty solid unit. In the previous hour and a half that I had been dropped from these guys, Steve had spent probably 45 minutes of that off the front with one other guy, and David had made every front selection. Ballers!

Here comes my redeeming moment. Steve led David and I into the crucial second clump of gravel, and we stayed near the front through sectors 1, 2, and 3. Going up the 4th gravel that I had to run up the first lap, I see David running. He mounts his bike faster than a sorority sister 2 beers deep jumps onto a mechanical bull at a wild west themed bar and he actually gained places instead of losing them while running. Then, David and I led the field over the second part of the climb, which just so happened to be the most spectated area on the course. 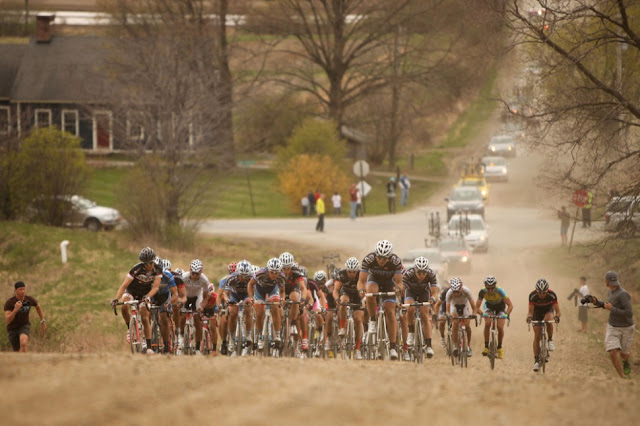 We descend, I have a rock the size of a baseball hit me at 40 mph and momentarily (the rest of the day and into the next morning) think I broke my forearm, and continue on. 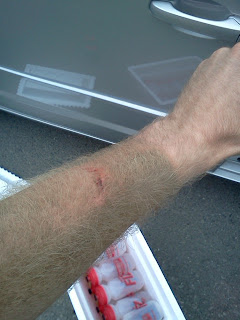 We go up the final climb of the race and I cramp on four separate occasions, but keep up with the front split over the top of the climb. Steve and David make that split also, then Steve pulls rapidly on the front from 3k to 1.5 k to go. David and I got a little separated in the last K, and we both do a completely seated, fighting off cramps, biting our cheeks sprint for 7th and 9th in the group. This put us at 20th and 22nd on the day, out of somewhere around 180-200 starters.

Then I laid in the grass and moaned for 30 minutes. 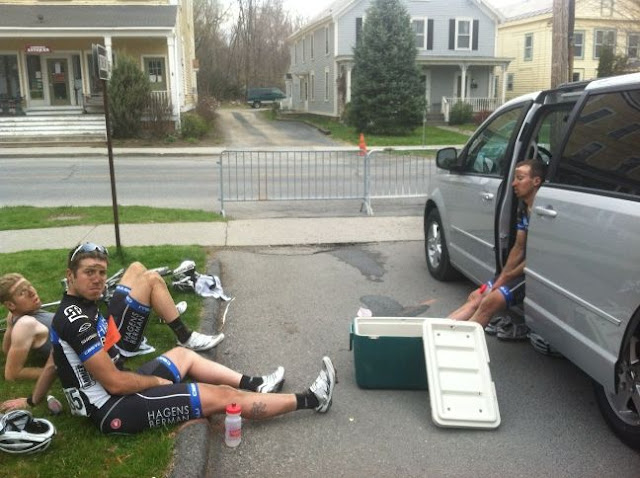 Have you ever done, or heard of, the Saltines Cracker challenge? Or the Cinnamon challenge? Or the Powdered Donut challenge? Or the race in a dry gravel road race then try to eat fake food challenge? If you have no awareness of any of those, what happens when you eat cinnamon or dust from a gravel race is that your mouth becomes too dry to swallow anything before completing the challenge. The challenge in this race was eating uh, anything, because if you weren't first wheel the entire race you were very dirty. 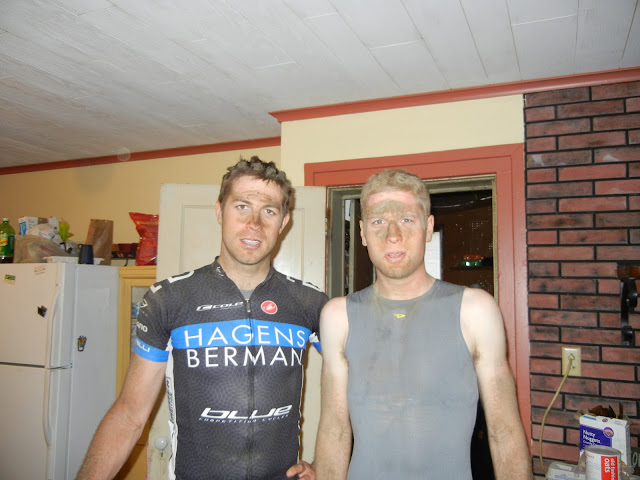 The amount of flat tires during this race were incredible. We hit a downhill section of gravel and literally 20 people flatted. Flats on flats, snacks on snacks. I had zero problems thanks to my Vittoria Corsa Evo CXs in optimal 25 width. I was using Cole T-25 wheels which are a bit wider than our carbon wheels and they have an aluminum braking surface. They were perfect.

Back to food really quick- I ate/drink about 2000 calories in the race. Not quite enough. The necessity was to eat and drink on pretty much every road section. I would eat until I was almost sick, and then ideally wash it down with some coke.

After about 10 minutes of racing, I decided I didn't care if I chopped any Brits before any crucial gravel sections. Or Irish. Or Kiwis, Australians, Canadians, Columbians, Mexicans, or even Americans. I wouldn't chop any Hungarians though, because Adrian is my friend.

I woke up the next morning with rock bruises on my forearm (obviously), but also up and down my rib cage and stomach.

This was the coolest race I've ever done. 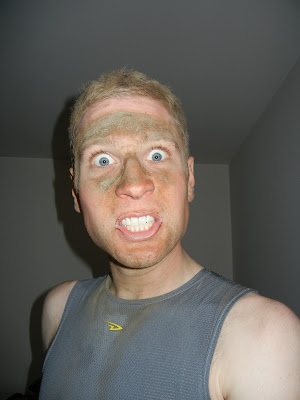 Battenkill was a great experience. I'm really stoked with how I rode personally, but more so about how we rode as a team. Out of that front group, we were one of most represented teams, and definitely rode as a unit. Although not a true "Northern Classic", I've never done any other road races in the States where throughout the course of the race I had to get off my bike and run, got caked in dirt, or woke up with bruises WITHOUT crashing.

See you next year Battenkill.Tweet
Posted by Ian Crane at 9:43 AM