A can saw would be a a pretty good invention. Sometimes those little tabs on the top of cans, especially soup cans, break off and make it unbelievably opposite of easy to open. I think that if they didn't create the tab out of a metal pliable like string cheese then it actually would be easy to use, but instead we are forced to invent a product like a can saw to cut off the top 1/18" of the can (safely) so that our problems dissolve. Also, A can saw is how people with lisps say R-can-saw.

6 AM!!!!! A good time to fly because they give you breakfast snacks. Not regular airline snacks, but better, because they are supposed to welcome you into the day with the tasty flavors of morning. Yesterday's breakfast snacks were 100cal packages of mini cinnabun cracker things. That would be delicious if poured into a bowl with milk  and eaten as if it was a cereal. But since we start JMSR off with an uphill TT today, I ate cotton candy instead. Light food.

The travel day fun technically started when Kennett called me Tuesday night informing me that his bag was missing and that I would need to pick it up from a room where there was snacks in the Little Rock Airport. Ok, FF to Wednesday morning. Inside of my car, at 4 AM, we loaded three pika packs, three Black Diamond duffles, three backpacks, and four people. The trip ALMOST started off terrible when I drove for 12 seconds with my helmet still at the house, but my luck shifted (small foreshadowing) and I remembered it before we had driven far. Check in, argue over bike fee, board plane, "study" (watch two episodes of Dexter) and land in Las Vegas. Viva.

We had a one hour layover in Sin City, and since I had never gambled in a casino before I knew that this was my time. Airport slot machines + me = HUGE WINNER!!!!! 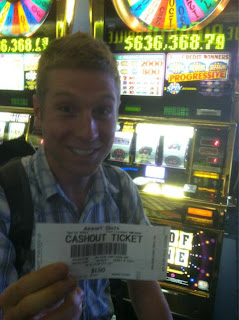 It was pretty exciting, but I figured to avoid a future of addiction, poor attitude, grumpiness, debauchery, and bright lights I should quit after I spent a set amount of money. And I came out a WINNER! HUGE WINNER!

Then we found Hornbeck and Danny. Haven't seen them since Redlands. Hornbeck is still a bro, and Danny now has a mustache. In case you were curious.

Our flight took us from Vegas to Lil Rock. The Little Rock airport is pretty cool, here is a picture I found of it.

To distract us all, I think that it would be really weird to have an action figure of yourself. Even hearing yourself on a voice mail or seeing yourself on video is awkward, imagine holding a lifelike replica of yourself! But I guess that's how I feel every time I hold a puppy stuffed animal, because I'm soooo cute.

Anyways, back to airports. We land, I find Kennett's bag. As in I see it in a room that I am NOT allowed in. A crazyyyyy cray cray lady guarded this and refused me entrance. I waited. During this time, I overheard an EXCELLENT argument from three Arkansas natives, that involved a lot of finger waving and excessive adjective use. Eventually I got Kennett's bag by proving my identity. It was a very difficult process to show who I was. I had to take out my ID!

We wait and wait, and Danny's bike bag doesn't show up. I can only imagine that this was punishment for scaring a lot of cautious protective mothers with his mustache. I swear that he's a good person and doesn't represent what his caterpillar represents. He says it's a "playoff mustache" for his hockey team. Danny said "F the Haters" when despite his unruly facial hair he assisted three different people put their bags into the overhead compartments. Hero! 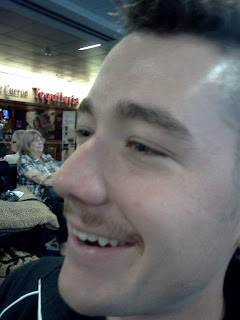 Danny's bike was scheduled to get to the Little Rock airport two hours later. Since our host housing is three hours away in Fayetteville, we needed to stall. We left the airport, built bikes in a park, rode for 45 minutes, repacked bikes, reloaded the van, drove back to the airport, got Danny's bike, reloaded the van, drove to a grocery store, ate "dinner", drove three hours of driving distance in two hours and twenty minutes, dropped people off at one house, went to another, dropped stuff off, went to the grocery store, ate a croissant and another greek yogurt, back to the house, built bikes (again), and then to bed. 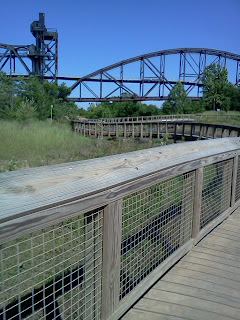 Today we kick of the Joe Martin Stage Race with a 2.5 mile uphill time trial. I planned ahead for this moment, because when I built my bike (twice yesterday), I didn't put my water bottle cages on. Supa-light!