Everything to do with cycling has changed since I started racing. From frame and wheel technology all the way down to the water bottle and cage.
However, there is only one feature of cycling that hasn't changed. Race numbers are the Grandpa of the Thanksgiving dinner table that is bike racing- "Back in my time we had to use SAFETY PINS on these large PAPER numbers!" BUT WAIT! X-amount of years later, I still pin my darn bib number to my kit. As of late, it seems as if race numbers are becoming something of a hot topic, blowing up on internet forms such as Facebook and Twitter. I did some research to find just what the conflict is with the number issue. 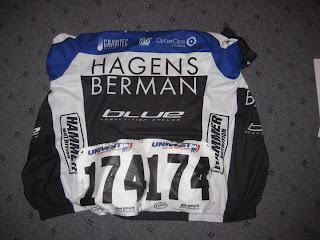 @LangReynolds: Seriously? We race TTs for years with just 1 body # and now with "better" technology we need 2 body #s and a frame #? Ridiculous

@LangReynolds: Somehow they were able to score all of us timely and accurately w just 1 body # in the TT tonight. Amazing!

@GliderBison: Pinning my single, tiny race # to my skinsuit for tomorrow's #USPro time trial. twitpic.com/53f2r9"
From http://gliderbison.blogspot.com/
"GOT THAT? NO FOLDING! NO CRUMPLING!  BOTH NUMBERS! FRAME NUMBER TOO! PENALTIES GALORE!!!!!!


I actually caused quite a stink last year with my heinous violation of the "no number folding" rule. It's true. I folded my numbers when I took to the line at last year's Enumclaw TT. I was caught, and punished right there. Time was added to my result. I sobbed and sulked, and begged for forgiveness. "I'm a changed man," I pleaded, "I'll never fold numbers again!" But the officials heard none of it, and held their ground "
@TheJoeHolmes: Ok, they should be able to score me tomorrow at MOE. I have all 856 of my numbers pinned and plastered all over my kit and bike.

@TheJoeHolmes: Imagine that, a Prius in the commuter lane going slower than the flow of traffic in all the other lanes.

So it seems that the large problems with race numbers are: 1) Quantity of , and 2) Ease (lack of!) application. It's true, pinning race numbers does get old. It isn't really THAT inconvenient, but how hasn't it changed? We adapt, have our own strategies, and we all have our favorite locations to pin. Since I am not a collegiate woman and no longer a Junior, I pin my own numbers. Just last weekend I had to wrestle my skinsuit in the van while I had it molded around the most body like shape I could find, which in my stature happened to be the passenger seat. Lang matched his body to the steering wheel. Both of us got our numbers pinned, but at what cost?

Since there have been no technological changes, I offer you this. What if you could get scored for your race accurately? Results available instantly? Or dare I say, not have to pin numbers?

I have the pleasure to introduce you to my new system. A simple microchip, implanted in the riders neck, that when triggered a sensor sends rider information to the computer. 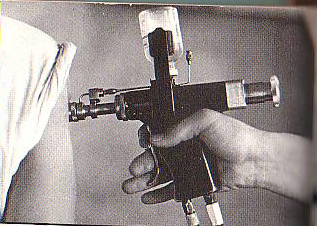 How does this work? Whoever the Cycling governing body of your country is invests in these chips. The rider fills out a personal profile on the internet- Name, Age, Hometown, Results, Strengths, etc. Then, whenever a rider orders a racing license, the chip is programmed and sent along with the license. Then, the rider injects said chip into their neck, and until the license expires and the chip disintegrates (healthily of course), the rider has their information stored in their neck. Finally, all races everywhere will have the universal scanner- This makes it so the chip works everywhere, regardless of the event. Cross the sensor, and you are scored.