This just in, Prologue TT's are anti-climactic.

1 hour of warmup. Less then 7 minutes of racing.


Always after a TT you hear the same story 100 times over in the parking lot:


"Well I mean that was hard but I could've gone harder probably. The weather sucked for me only. I only got 7 hours of sleep and I race better on 7.5"
You get the picture, and we are all guilty of it! Time trials are profoundly simple, yet so over analyzed that it is ridiculous.  While racing, there is no way you could've gone harder. Yet after, we are all quick to think about places we lost time, or imagine ourselves going faster. Everyone does it. The beauty of a short prologue is that the person that wins isn't in all cases the FASTEST person, but the one who can push themselves further when they can't see straight.
But after that, I mean really. Look at the results I posted. Were there any places that I could have gone faster so my time was 2 seconds faster and into the top 30? Did I pedal through the finish line instead of to the finish line? When I was uploading my data to Strava mid race was that trouble?
Thankfully, there is more then 7 minutes of racing between now and the end of this stage race tournament.
Readers of this blog might remember that Lang really likes helping people , and here he is, at it again! 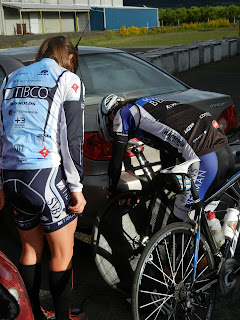 And finally, for my 38th place in the prologue, Hood River awarded me a key to the city! But actually, our host was awarded one, which is pretty darn cool. 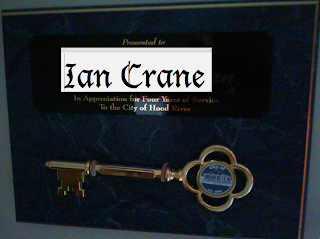