Three days of NRC crits in better-than-expected Tulsa, OK. Although it was roughly 30degrees too warm for my refined Bellingham heat-buds, Tulsa itself is pretty cool, especially the community involvement for the races. More on that later.

Friday night we rode to the course in the heat, did 10 minutes of spinning in the sun, and then all of a sudden it was thunder and lightning out.  Our race was delayed by 15 minutes, since apparently the chance of being hit by lightning in your life is 1/10000, and probably greatly increased by bicycles. So we waited under tents while it rained harder than I have ever seen, but only for 10 minutes. Then we raced. And it was crazy. Literally crashes every lap. I suffered some horrible cramps roughly 30 minutes in, likely attributed to the fact that I hadn't been able to drink anything due to pure terror for the first half of the race, and with that, my race was done. Perhaps that was the best thing that could've happened to me- both Kennett and Spencer were involved in crashes later in the race. Unfortunately for Kennett, his was pretty serious and I ended up spending several hours at the ER with him Friday night while his collarbone was Xrayed and his address was questioned. Turns out he did indeed break his collarbone, even though "it didn't look broken", and his race weekend was over.


Saturday morning Spencer and I went for a spin along the river trail. This trail was unbelievably convenient for us to get to and perfect for easy spins, so we took advantage of it daily. A cool part of the trail is that every so often there are large animal statues. My favorites were the bobcat attacking a bird and the bear waterfall. 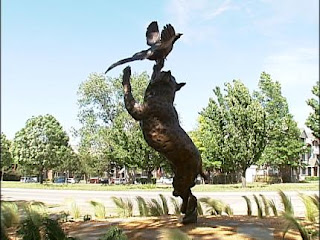 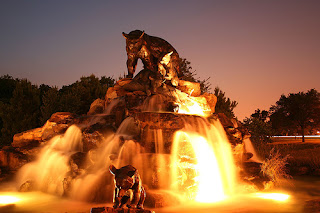 And then Saturday afternoon I shaved my arms Spencer and I headed off for Saturday nights start, and about 45 minutes before the race the thunder, rain, and lightning rolled in again. Luckily, it stopped and cleared up before we raced. This was my favorite race of the weekend, a super fast, 6 corner, with a small climb and a wicked fast final corner made for a fun night of racing. It was hot, I sweated alot, drank 2 bottles, was in good position with <10 laps to go, and then lost roughly 30 spots in a corner when I went to the inside and shoulda went outside! Then I rode in my 53x11 doing absolutely no passing for the rest of the race.
Sunday we raced during the day and it was nutso - wacky. Here are some features that were to make it a difficult day.
Allright this race was brutal. But also the coolest race I have probably ever done. On crybaby hill, there were no barricades, and an organized party on the lawns overflowed onto the streets with drunk, costumed, and enthusiastic crowds who were quick to spray you with hoses, squirt guns, run along side, hand off beer, water, or jello shots, and just cause a general ruckus. Although it was pure chaos on the climb, I never felt like it was dangerous or out of control, and it really was a great feature to the race course. Besides that, I got dropped about an hour into the race with somewhere around 8-9 laps to go. I got pulled, and was credited as one of 70 finishers. There were roughly 120 starters. Then I sat in the shade and didn't want to move for 4 days. 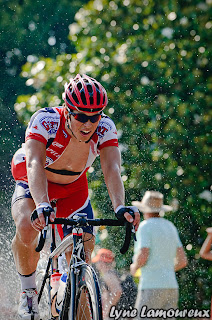 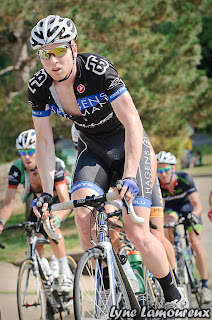 Benny and I in our various stages of suffer
So we finished. And then drank a smoothie. Then, Spencer really wanted some Barbeque. So we got on our bikes and ventured out to find some. Unfortunately for Spencer, the one bbq place was CLOSED! 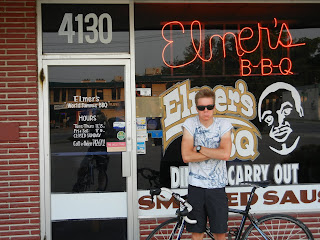 That's it and that's all from Tulsa OK. Tomorrow I fly to Milwaukee for Tour of America's Dairyland and Spencer flies to head back to America's hat.

Thanks Tulsa!Tweet
Posted by Ian Crane at 3:56 PM