Tour of America's Dairyland kicked off yesterday with the Shorewood Crit. It was a 4.8 corner course that was 1.4 miles. I say .8 because it was basically a big box, with one chicane that wasn't anything crazy. The crazyness came from the Pave that was the second straightaway. It was unbelievably bumpy, with huge holes, big gaps in the pavement, and several jumps that if you weren't ready for were quick to try and buck you off the bike.

The race itself went fairly well. Dan raced like a thug, and won 2 premes, spending many-a-laps off the front. Steve also won a preme, and lil Logan was 14th. Joe Holmes raced with us and made sure to tell us "I'm too old for this har har har". I was 21st, and was second on THREE premes. Which means absolutely nothing! I'm still struggling with positioning. With 4 to go I was on Jon Cantwells wheel, with 3 to go, I was on the guys wheel who got third, and with 2 to go I was somewhere around 6th wheel. Then once again I went to the left when I should've went right or something like that and all of a sudden with 1-to go I was in ~40th spot. I'm making it pretty hard on myself to get a result, but the great thing about crit school is that there is a race today, and one tomorrow, and so on. So practice makes perfect?
After the race, being in Dairyworld and all, there was chocolate milk off the yin-yang. Logan was apparently the best cat 2, which means he got a special cow jersey to wear today!

In other events, Joe Holmes managed to destroy two mailboxes backing out of our driveway. That was fun. This morning, Steve and I did really manly things like play Billiards, Lift weights, and pee outside. In case you are curious, Steve and I are tied 3-3 in billiards wins. But 2 of my losses involved me- A) accidentally getting the 8 ball in a pocket, and B) Having no balls left to get in, with Steve having like 5 left, and then I got the 8 ball, AND the cue ball in the pocket. Therefore losing.

But I'm a pool shark. Sometimes. Sort of. 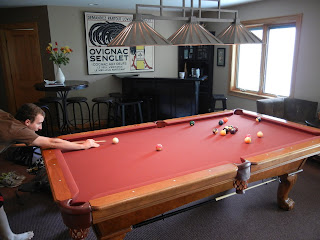 So that is that. Only a couple more hours of down time before we go race again!Tweet
Posted by Ian Crane at 12:01 PM